DAKAR / NEW YORK, 17 May 2022 — The number of children with severe wasting was rising even before war in Ukraine threatened to plunge the world deeper into a spiralling global food crisis - and it is getting worse, UNICEF warned in a new Child Alert.

Almost 1 million children across the Central Sahel, are already suffering from life-threatening severe acute malnutrition. This number will increase by 40 per cent to 1.4 million in the coming months due to the combined effects of multiple crises, including rising insecurity, increased food prices and climate change.

Currently, at least 10 million severely wasted children – or 2 in 3 – do not have access to the most effective treatment for wasting, ready-to-use therapeutic food (RUTF). UNICEF warns that a combination of global shocks to food security worldwide – led by the war in Ukraine, economies struggling with pandemic recovery, and persistent drought conditions in some countries due to climate change – are creating conditions for a significant increase in global levels of severe wasting.

“Prices are rising for life-saving treatments just when they are most needed,” said Marie-Pierre Poirier, UNICEF Regional Director for West and Central Africa. “With rising insecurity, increased food prices, climate change and with rainfall last year well below average across the Sahel, child malnutrition is increasing significantly. We need to act now, not just to invest in life-saving treatment, but also to build the long-term resilience of communities and shift to prevention because we urgently need to address the root causes of these challenges.”

West and Central Africa is home to 12% of the world’s children, but the region bears a disproportionately large burden of key child rights deprivations. The region is home to 20% of all stunted children under 5 globally (29.3 million).

UNICEF has over 1,700 UNICEF field specialists working in the 10 Sahel countries, across 45 main offices and sub-offices. These offices support children as they grow up alongside conflict, malnutrition and disaster recovery.

To reach every child with life-saving treatment for severe wasting, UNICEF in West and Central Africa is calling for:

Ready-to-use therapeutic food (RUTF) paste is a lipid-based energy dense, micronutrient paste, using a mixture of peanuts, sugar, oil, and milk powder, packaged in individual sachets. UNICEF, the global leader in RUTF procurement, purchases and distributes an estimated 75-80 per cent of the world's supply from over 20 manufacturers located across the world.

Official development assistance (ODA) is government aid that promotes and specifically targets the economic development and welfare of developing countries. The Development Assistance Committee (DAC) of the Organization for Economic Co-operation and Development (OECD) adopted ODA as the main instrument of foreign aid in 1969 and it remains the main source of financing for development aid. ODA data is collected, verified and made publicly available by the OECD. 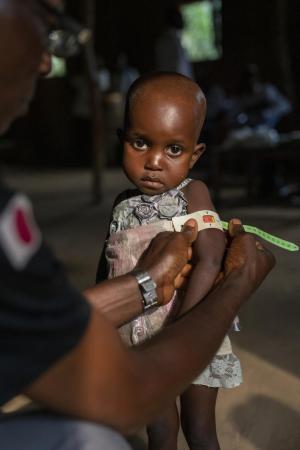