My name is Vu Xuan Viet, UNICEF Viet Nam WASH Specialist working in the UNICEF Emergency Programme. I have been with UNICEF for four months, which means I am a newcomer here. Emergency work is sometimes very challenging and stressful. Everything was new to me at the start, but the longer I work here the more I love my work.

As part of UNICEF’s on-going emergency response  to a severe drought in 10 affected provinces in the South Central, Central Highlands and Mekong Delta regions of Viet Nam, I recently (November 9-10) went on a field trip to Ben Tre to visit three communes (Ba Tri, Giong Trom and Mo Cay Bac) impacted by drought and salt water intrusion as well as forecasted to be greatly impacted by climate change in the future.

Truong Viet Hung, the trip photographer and long-time member of UNICEF’s Viet Nam Communications Section, accompanied me on my journey south. The purpose of our trip to Ben Tre was to discover how the drought and salt water intrusion had affected the livelihoods of people and children in this Mekong Delta province. Before departure, we held in-depth discussions about our respective roles on how best we can work together to collect the most relevant stories and images for our mission.

We started our journey with a small concern our scheduled visits could overlap with school hours, which would hinder our ability to talk with children in selected households.  Luckily we finally found a solution by deciding to engage them over lunch and stay later in the afternoon to meet and listen to children’s experiences.

The following stories are first-hand accounts from children and their families describing their day-to-day lives and challenges to overcome this significant natural disaster  and learn how to adapt and accept climate change will continue to have great impacts on this land.

Upon arrival in Ben Tre we met Pham Thi Hong Xuyen, Chairwoman of the commune Women’s Union in Giong Trom district, who took us to visit the household of an elderly lady. Aged 72 years, Tran Thi Quyen still looks healthy despite a hard life full of worries about her family. She took us on a walk through her My An hamlet in Long My commune along a canal passing through a garden and fish ponds as well as a small open air toilet. Crossing a small bridge to her house, Quyen looked up at the coconut trees and said: “This year, we suffered big losses with our coconuts. Salt water intrusion has made the coconut fruit very small and easily fall from the trees. I feed the fallen ones to chickens. In previous years, we could harvest about 100 coconuts a month, but this year we harvest 100 in three months and the dealers only pay VND 80,000 (US$3.5) per dozen. This year they boycotted the small coconuts, which has made our lives more difficult”. I responded by asking if she had sufficient clean water during the drought and salt water intrusion. She pointed her finger to the neighbour and said: “The drought and salt water intrusion this year was longer than past years. We didn’t have enough clean water and I have been forced to ask my kind neighbours for help in sharing their clean water and they kindly accepted. I tried my best to save the clean water that we have and I have had to collect rain water in buckets from my fibro cement roof. But by February this year, we had totally run out of rain water. Our family’s daily meals depend on my grandson finding river prawns and fish. But since the long drought and salt water intrusion, his luck has run out and he catches very little -  not even half a kilo. The truth is if this natural disaster continues, we would rather die”. In a sorrowful voice she continued: “Our lemon business is also failing. Now, we only get VND1,000/kg  (US 10 cents) as the saltwater  has made our lemons yellow and bitter. Nobody wants to buy them. In the past, we could sell for VND10,000-15,000/kg - but now it is impossible.”

“I want to learn well in school so when I grow up, I can become a police officer and give you and dad all my salary to help our family.”

Quyen lives with her 34-year-old nephew Dien  and his nine-year-old son, Tran Van Kha. The boy lost his mother when he was aged four. Kha and his father were raised by Quyen since they were small kids. She feels for Kha: “The boy lost his mother early. Since then he has become quieter and doesn’t want to talk with strangers. He only plays with kids in our neighbourhood. Though he is a good boy, he’s very shy and afraid of the dark. Every night before bed Kha wants to go to the toilet and I take him to the one in my garden. It’s very dangerous for him to go there alone, if he misses a step he would fall into the pond.”  Kha always sleeps with Quyen and often says: “I want to learn well in school so when I grow up, I can become a police officer and give you and dad all my salary to help our family.”

A BOAT TO NOWHERE

Next stop was the household of Nguyen Van Linh. The 40-year-old has a determined face, but perhaps  his struggle to take care of his family has made him look older than his age. He is considered a hard-working man in Tan Phong 2 hamlet, Thanh Tan commune where he lives with his children and family. Early this year, his family welcomed good news. A coconut company from Malaysia had provided a small amount of capital to allow Linh to rebuild his house from bricks.

He was busy transporting construction materials for the house together with his close relatives when we arrived. Linh said he really wanted to build the house with his own hands, which he and his wife have dreamed about. It was also a good way to save costs during this difficult time caused by the drought and saltwater intrusion crisis this year. Ranked by his hamlet and commune authority as a poor household, he and his wife have struggled to survive from this historic disaster since late 2015. Linh and his wife Hoang Anh had inherited about 1,000 square metres of agricultural land from their parents. But, there was almost nothing left on their land as the paddy rice crop was unable to tolerate saltwater. Instead, Linh decided to focus on fishing. However, this year it got harder and harder to catch fish from the nearby Hau River. His small fishing boat was often trapped due to lower floodwaters than normal. Without floodwater, the main livelihood for himself and his family has become unstable. Despite this obstacle, Linh and his wife stood firm to overcome the challenge. During the peak period of drought and saltwater intrusion, they decided to take out a loan of VND 30 million from the Bank for Agriculture and Rural Development to buy two cows, plant coconuts and raise poultry in their small garden.

Linh took us around his new house. His pride was obvious when he pointed to a new latrine for the household, just nearby. He said his family had never had a safe and clean toilet before and this had made it hard for his wife and children to practice safe personal hygiene and sanitation. His  three-year-old daughter often became sick due to poor sanitation. Upon deciding to rebuild the house, he decided that building the latrine was his first priority. His daughter, is the youngest family member. She appeared intelligent and active. “I built this house to have a proper shelter for the kids. My wife and I have got used to this difficult situation,” he said. “It was my mistake not to make the steps from the house foundation, my daughter slipped and fell. She has had a fever for a few days already. I will definitely make the steps so she will not fall again”.

Although enduring a hard life, Linh’s family has benefited from warm support from their neighbours. During the recent natural disaster, they shared food and water with their children when Linh and his wife returned from fishing trips. Linh took us to the Hau River to graphically illustrate how the drought had affected him. There his fishing boat sat marooned in the mud.

“This boat has been so important to get food for my family and for previous generations. No matter how difficult it is, I will keep it and go fishing. When it is trapped, I will try other ways to take care of my family”.

His hands continued to rearrange the fishing nets as he talked. Worry lines spread across his face. “Each year I can only catch fish for a few months, from November to April. If the drought and saltwater intrusion happens again, it will be extremely difficult for us.”

Silent for a while, Linh recalled days when he and his wife left their hometown to work as paid labourers in a textile company in Ho Chi Minh City. They usually worked overtime, but their low wage was insufficient to make ends meet. “In those years when we migrated from Ben Tre, I had my parents in law to take care of my first son. But even that would not put our minds at ease”. When his wife gave birth to Hoang Anh, they decided not to migrate for work and instead settled down in his homeland to take better care of the children. For them, children are the best treasure in life.

On the way to see us off, Linh motioned that he had something to tell us, but finally kept it to himself. We left feeling hopeful that their beautiful children will be a foundation and motivation for Linh and his wife and that they will soon find ways to get their boat back into the river to build a better future for their children. 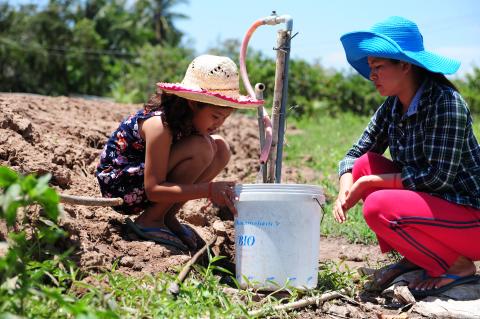 Building resilience for children in schools and communities

For more than a year,  To Trinh has watched as her parents struggled to make ends meet as the worst drought and salt water intrusion crisis in 90 years 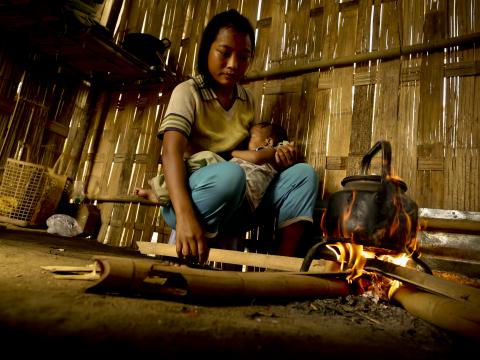 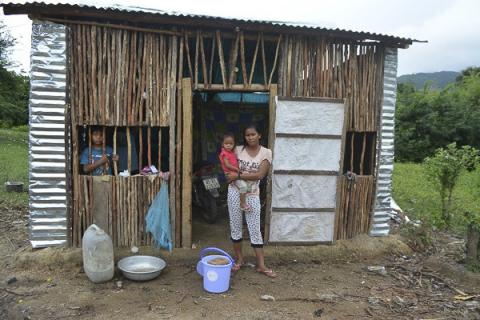 Bringing local lives back to normalcy

The 29-year-old Raglei ethnic minority mother, like many in Ninh Thuan province, has struggled for the past 36 months with the consequences of a fierce drou 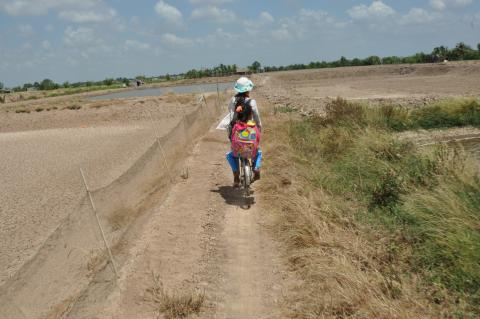 “Now I know what natural disasters are and that they can be made worse by people’s actions,” Thach Thi Thanh Thuy, a 10-year-old student of 4A3 class