After more than five years of conflict, Ukraine is now one of the most mine-affected countries in the world.

Sasha was just nine when the fingers on his left hand were ripped off in an explosion.

“I thought that the shelling had started again or that it was firecrackers,” remembers his mother Olena, who was inside the house at the time. She watches sadly as her 11-year-old son knead dough with one hand. “Later we found huge fragments and shells in the garden.”

After more than five years of conflict, Ukraine is now one of the most mine-affected countries in the world. Landmines and other explosive remnants of war (ERW) were the leading cause of conflict-related child casualties in 2017, accounting for about two-thirds of all recorded deaths and injuries and leaving many children with lifelong disabilities.

Sasha’s home town of Krasnohorivka in the Donetsk region is surrounded by mines. Located just meters from the frontline, it has been repeatedly shelled. Locals joke that it is easier to find an explosive than drinking water, having had their supply cut off for four years.

“War is everywhere,” says one of Sasha’s neighbours, whose house is one of the many here that have been damaged by shelling. “It surrounds children.”

Sasha’s friend Sophia, who was injured in the same incident, needed to have 30 fragments of shrapnel removed from her body by doctors. She was just three years old. 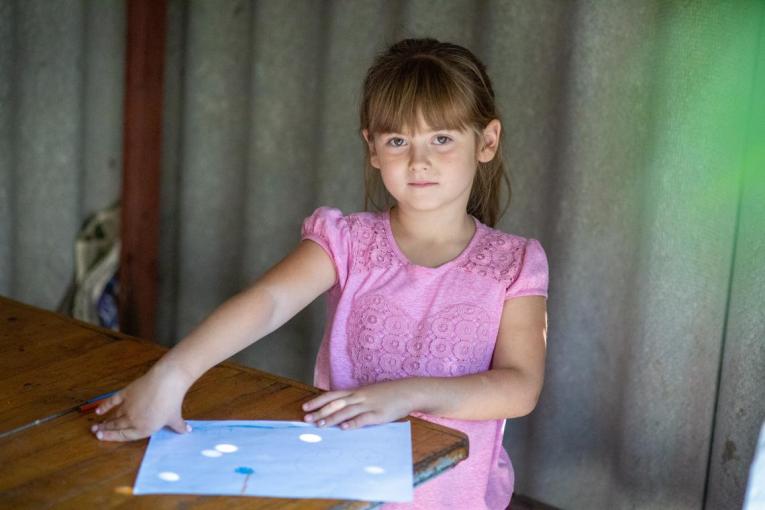 The pair are among around 400,000 children currently residing in the 20-kilometer zone along both sides of the highly contaminated ‘contact line’.

In most cases, child casualties occur when children pick up explosives such as hand grenades and fuses, often thinking of them as toys.

“I sat on the couch, watched The Simpsons, and held the cartridge in my left hand. Just spinned it. And then an explosion burst out.”

Last year, 17-year-old Maxim lost a hand and an eye after finding a small cartridge in his garden.

“I went into the house,” he recalls. “I sat on the couch, watched The Simpsons, and held the cartridge in my left hand. Just spinned it. And then an explosion burst out.”

“I remember that I fell down in the corridor. And then my mom and a soldier, who lives nearby, came running. They helped to stop the blood and called an ambulance.”

Part of Maxim’s hand was amputated and shrapnel removed from his head. His eye could not be saved. Now, although he has a prosthetic hand, it is difficult to use.

“It is attached to the arm with a sticker,” he says, sighing. “But it is not functional. It’s hot with it in the summer and it squeezes my hand heavily, so I don’t use it.” 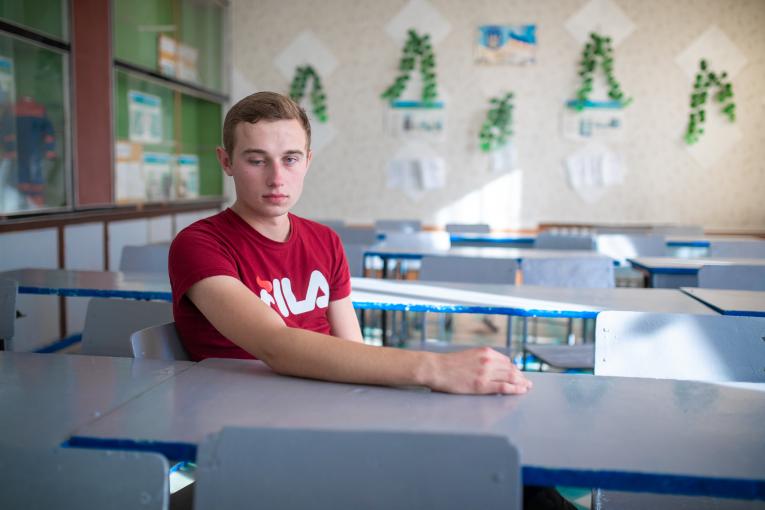 Another casualty is Alexey, a 14-year-old boy. "I picked up this thing from the ground and probably pressed something – and then it exploded,” he recalls.

“I had a lot of blood and I saw my fingers hang from my palm. I was so shocked that I began to tremble. I almost lost consciousness. "

“I had a lot of blood and I saw my fingers hang from my palm. I was so shocked that I began to tremble. I almost lost consciousness. "

In response, UNICEF and partners have reached more than half a million children in eastern Ukraine with Mine Risk Education sessions since 2015. The sessions teach children how to protect themselves from mines, unexploded ordnance and ERW.

Teacher Kateryna Hrybinychenko is part of a team, led by the Swiss Foundation for Mine Action and funded by UNICEF, that has been visiting schools close to the contact line.

“We are used to telling children from their youngest age that electricity is dangerous,” she says. “We are constantly explaining to our children not to touch the socket. It’s kind of a habit. Mines should be just the same. Children should understand that mine danger is not cool, it is not funny and it is not interesting. This is something that can harm or take lives.”

In addition, UNICEF has provided psychosocial support to 270,000 children affected by the ongoing conflict. However, much more needs to be done and UNICEF needs help. 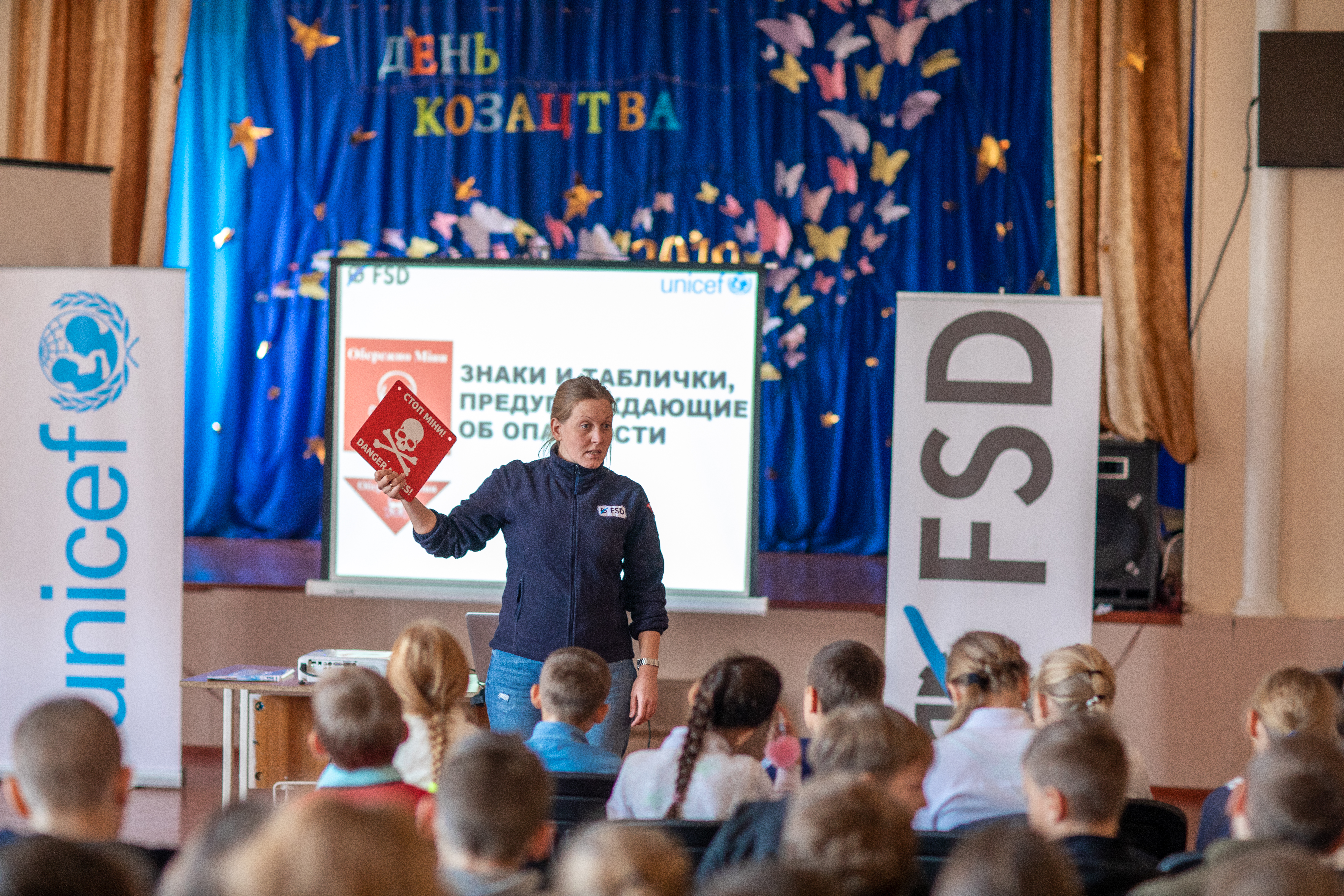 As of 2017, only 46 per cent of UNICEF’s emergency appeal to support children and their families in eastern Ukraine had been funded. Child protection activities including mine risk education and psychosocial support, had an even larger funding gap of 73 per cent.

And while mines pose an ever-present threat, they also can damage crucial infrastructure, such as water, electricity and gas facilities, further endangering children.

"Mines and explosive remnants of war are threatening children's safety and leading to injuries, maiming and emotional distress,” says Lotta Sylwander, UNICEF Representative in Ukraine. “Maimed children are exposed to higher risks of violence and stigma. Their families often lack the means or ability to provide children with the assistive devices they need, and face difficulties accessing basic services including health, education and social protection.”

Maxim, who lives daily with his injuries, does not dare to even dream about a new robotic prosthesis, which he says is unaffordable. “I didn’t even Google the cost of such a prosthesis,” he shrugs. “I understand that this is unrealistic money for me.”

One mother from eastern Ukraine told UNICEF of her futile struggle to afford surgery for her child, who was injured by an ERW. “I borrowed some money,” she said. “I tried to find a part-time job, but I cannot do it any more as I am always with my son – I help him to wash, to carry things, to eat. This is how life is now. It will never end.”

Mine risk education for children on both sides of the contact line continues to be critical nearly six years into the conflict. That is why, with support from the Governments of Germany, Italy and Japan UNICEF continues its mine risk prevention measures to minimize the injury. Last year, more than 37,000 children and families received mine risk education with UNICEF support.

In 2019, UNICEF and partners carried out the first-ever needs assessment on mine victims in eastern Ukraine.  This was an attempt to strengthen the protective environment for child mine victims through community networks and awareness-raising. Within this intervention, 35 child and caregiver landmines/ERW survivors benefited from case management and targeted individual assistance. 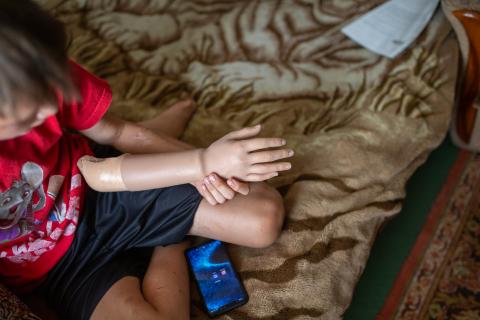 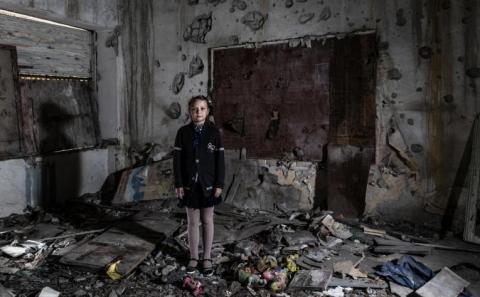 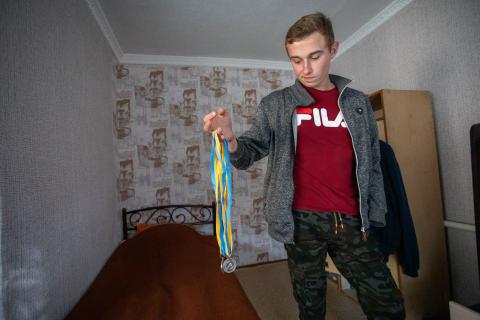 A deadly explosion almost killed him, but this Ukrainian teen is never giving up 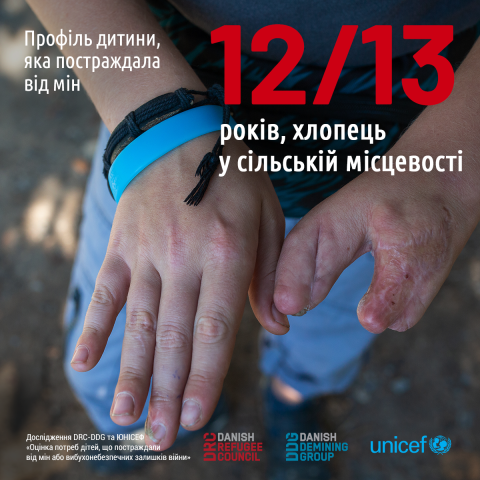