Every girl has the right to make decisions for her education, life partner and future

Sudan's sovereign council recently approved a number of amendments proposed by the Ministry of Justice, several articles in existing laws affecting the freedom of children and women were abolished,  these include banning Female Genital Mutilation/Cutting (FGM/C) and allowing women to travel with their children without a permit from a male relative.

The Miscellaneous Amendments (Fundamental Rights and Freedoms) Act of 2020 was finalized on July 9th, 2020.Today, around 200 million girls and women across the world have undergone some form of Female Genital Mutilation/ Cutting (FGM/C), 86.6 percent of women and girls from 15 to 49 years old have undergone FGM/C in Sudan, according to the most recent data from Sudan’s government.

Criminalizing FGM in Sudan comes following over a decade of persistent advocacy by all stake holders; the National Council for Child Welfare (NCCW), women and child advocates, donors including UK Aid and the Swedish government, UN agencies, international and national organizations, community-based organizations and community members, especially those who came together and publicly declared to join the ‘Saleema’ movement, with the aim to amplify and direct the efforts on the abandonment  of this harmful practice.

Ending female genital mutilation in one decade will require support from every quarter. With significant population growth, especially among youth, investing in young people becomes indispensable.

To understand more UNICEF Sudan talked to Child Protection Specialist Tamador Khalid about the recent amendments and what it means. 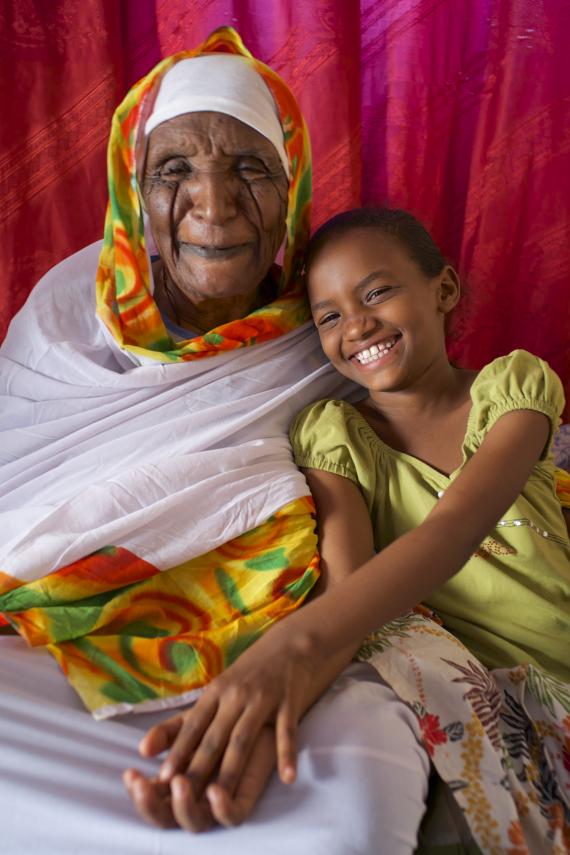 Shehzad Noorani
A "Haboba" (grandmother) wearing a "Saleema" tob with her granddaughter. The Saleema initiative, launched in 2008 by the National Council of Child Welfare (NCCW) and UNICEF Sudan, it supports the protection of girls from genital cutting, particularly in the context of efforts to promote collective abandonment of the practice at community level. Saleema is a word that means whole, healthy in body and mind, unharmed, intact, and untouched.. The broad objective of Saleema is to change the way that people talk about female genital cutting by promoting, at the community level, wide usage of new positive terminology to describe the natural bodies of girls and women. Since the Saleema Initiative began in 2008, the ideal of keeping girls saleema has spread throughout Sudan, and also created interest in neighboring countries such as Somalia and Egypt. The Saleema model of positive communication is Sudan’s gift to building the best future for girls and women everywhere.

What were your initial thoughts when the law was formally announced?

It took 14-years of hard work and struggle, to finally see the FGM law publicly announced and of course this is not the end. Abandonment is not only about the legal reform, or about legalization or criminalization. The road ahead is still very challenging, we need to collaborate, and identify who are the enablers and work very hard with the communities to make them demand the implementation of this law.

The intention is not to criminalize parents, and we will need to exert more efforts to advocate and raise awareness among the different groups, including midwives, health providers, parents and youth about the new law and promote acceptance of it. We hope when the MICS results come out later this year, we can see to what extent Sudan has been effective in protecting children from such violations.

Some people in Sudan believe FGM is deep rooted in the culture, will criminalizing FGM put an end to it?

Sudan is considered one of the countries where the prevalence rate is very high. According to the Multiple Indicator Cluster Surveys (MICS) 2014, the FGM/C rate is 86.6 percent. Sudan is one of the countries that is part of tier 1 globally. This has attracted much attention both at the regional and global level.

FGM/C is considered a violation, gender-based violence and a negative social norm. We need to collectively work together to abandon it.

Yes, the Law will accelerate the reduction in practice if it is effectively operationalized by all stakeholders; law enforcement, health practitioners and community members including parents. This period will require intensive collaborated efforts.

The law was approved by the Sovereign Council, comprising of military and civilian figures, including women.

Has the presence of women in this Council been a crucial factor?

The presence of women in key positions should always be a catalytic factor and supportive of women and gender equality issues. They are part of the women’s movement. But men have also played an important role at different ministries and institutions, especially the Ministry of Justice and the Ministry of Labour and Social Development.

The FGM law is a long process of joint efforts of activists, Government, CBOs and NGOs and donors since 2006.  The FGM article was part of the amendments to the Criminal law that Ministry of Justice prepared and submitted to the Ministerial Council for approval which was in line with the memorandum prepared by National Council for Child Welfare (NCCW) under the auspices of Minister of Labour and Social Development.

Did the Sudanese revolution play a role in the passing of this law?

The first national committee set to follow on the criminal law reform was in 2006.  A composition of diverse groups of women joined efforts to review the law and to address FGM criminalization.  In 2010 The Child Act 2010 was approved. This Act had incorporated article 13 that criminalizes FGM for the first time.  In the absence of the political will this article 13 was dropped.  Since that time six states (South Darfur, Gedarif, Red Sea, South Kordofan, Northern state, North Kordofan) issued state laws criminalizing FGM.

The efforts continue and in 2018 a national and Khartoum State FGM laws was revised and presented to the National Assembly and the Khartoum Legislative Council which was subject to various reviews but was never tabled for final discussion until the Parliament was dissolved in Dec 2018.

The December revolution spirit accompanied with strong political will, has paved the road for legal reforms crowned by the FGM law.

In Sudan, rights campaigners say female genital mutilation has over the past three decades spread to remote regions where it was previously not practiced, including Sudan's Nuba mountains and Darfur. Why has the practice of FGM spread to new areas of Sudan?

As a result of conflict many ethnic groups who have been forced to be displaced were hosted by communities where FGM practice is predominant. Displaced populations in their strive to be accommodated and accepted by host communities and as part of a acculturalization process resorted to practices that were not part of their culture. For instance, the Nuba, the Fellata and the Fur tribes were known to be non FGM practitioners, however started to adopt FGM as part of their new identity.

Can you tell us more about other changes that the Miscellaneous Amendments have made to women and child rights in Sudan?

The amendments is a real  achievements for women and children rights in Sudan, these includes but not limited to, giving the women the right to accompany their children while traveling inside and outside Sudan, abolishment of the article 151  titled “Gross Indecency” which has been used to beat women and humiliate them based on public order; abolishment of Article 154  “Practicing Prostitution” based on likely being in such place, the article was replace with more strong and clear wording.

Major achievements for children are abolishment of death penalty for anyone who did not exceed the age of 18, harmonize the definition of the Child with the Child Act and setting the age at 18.

What other struggles remain for women and young girls’ rights in Sudan?

Young girls, 38 percent are still facing the challenge of being married before 18-years-old. Child marriage is practiced among many groups in rural, more than urban areas, depriving them the right to education, making choices and decisions.

The 40 percent presentation of women in key political and senior management positions are not yet fulfilled.

What’s happening right now is actually positive and promising, changes have taken place since this new government came to power and we remain hopeful as we move closer to upholding all the rights of women and children and we welcome the announcement of the review of the Personal Law 1991 which will definitely consider the amendment to the child marriage article.

What about child marriage and efforts to abolish that too?

Child marriage is one of the more challenging issues. If I look at the prevalence rate in Sudan, it’s 38 percent according to the MICS 2014. S3M survey, though not comparable to the MICS survey and was conducted among families with under five-year-old, there are alarming figures regarding provenance. I must say that the figure is a bit high. Its over 60 percent among families with children under five. So, we’re really looking forward to the results and the findings of the MICS later this year.

There are a lot of issues that we should address. We must look at poverty, migration, displacement, conflict, movement among nomads-all are drivers behind child marriage. We need to start to think of having collective and consolidated interventions. We need to look at the imbalances in power relations, gender norms, and the aspect of socialization process and examine why child marriage is increasing in certain areas.

It needs a lot of collaborative efforts and a high commitment by the government. We hope the next few months will see the endorsement of the national strategy and the action plan for child marriage and the and amendment of the Personal Law 1991. And once the Personal Law is amended, we will be happy to see the minimum age set for a girl child to be married. All this is still pending, and we remain hopeful.

There is also currently a process taking place to develop a National Action Plan for Child Marriage. Hopefully this will be announced soon.

Child marriage is especially high amongst nomads and people on the move. They see it as a protection measure. The interesting thing is that it’s not just girls but also boys are pressured to marry very young.  This is happening in East Darfur, South Darfur, North Darfur and the East. Wherever there are nomads or pastoralists there is this intention to marry and like I said it’s not just the girls but also the boys.

Yes. Every girl has the right to decide over her body, education, life partner and future.”

Girls should be given the consensus and the right to take informed decision on anything affecting her life. Every girl should be given the right to information, continue her education, to choose when and who to marry, etc. Girls need to be empowered. I would hope that all parents, mothers, fathers, teachers to understand that no one has the right over any one’s body or future. They need to provide space to choose and to protect our girls from such violations. FGM/C and child marriage are considered a violation, gender-based violence and a negative social norm. We need to collectively work together to abandon them and I’m optimistic that the future of the girls, women and children rights in Sudan is bright.

A special thanks to our generous donors and partners and everyone who has contributed and continues to contribute to promoting the rights of women and children in Sudan.

The joint programme is generously supported by the governments of Finland, Germany, Iceland, Italy, Luxembourg, Norway, Sweden and the United Kingdom, as well as the European Union. 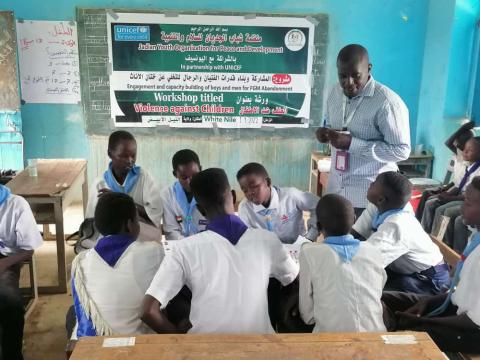 “For the first time, I know that circumcision is not good for a girl, and I have younger sisters." 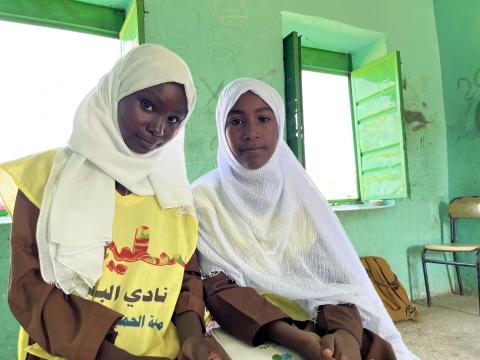 “Be wise… don’t neglect my worth…” 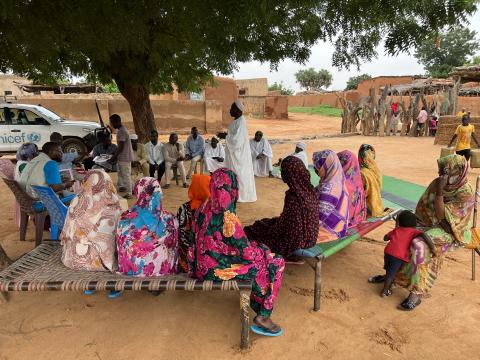 "My wife and I will do everything in our power to keep our daughters safe from getting circumcised." 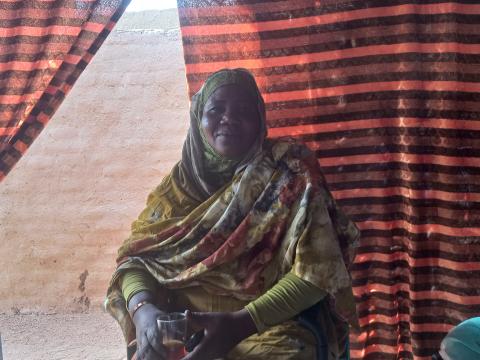