Firstly, what inspired you to take on a career in water and sanitation?
I had just finished university when I started working for an NGO in the Cambodian refugee camps in 1987. The educated elite had been murdered by the Khmer Rouge, and because none of the refugee staff had the opportunity for a formal education, I was the only engineer in a camp of 200,000 people. I was really thrown into the deep end.

How have communities been impacted by climate change in South Sudan?
In the last decade, the temperature has been increasing at twice the global average. While Somalia, Kenya and Ethiopia are facing a crippling drought, South Sudan is entering its 4th consecutive year of flooding. But the impacts on children are the same – increased risk of mortality.

I’m from Ireland and when we see several inches of water flowing outside the door, we call the authorities in a panic. But across South Sudan, flood waters can be 1-2 metres high, sometimes for months at a time. Food sources are impacted, livestock die, livelihoods are obliterated, and the family’s welfare is at risk.

With climate induced rains, small towns have become islands and we're going to see more of this as temperatures increase. In 2021, flooding made over 500 schools and almost 70 nutrition sites across South Sudan inaccessible, so children couldn’t use the services they rely on. When some communities returned to their villages, their tukuls (mud huts) were still below water. One year on, the flooding continues to affect at least 835,000 people.

Over 60% of the population are food insecure, yet South Sudan is quite a fertile country. Mangoes and pineapples are grown almost all year round, but they can’t be exported as just 2% of the roads are paved across the country and huge swathes of land are cut off in the rainy season. There’s just too much water for the agriculture sector and many families are only able to grow enough food crops to meet the needs of their families to survive.

Not only are there climate induced rains, but in areas which are impacted by overflow from the Nile tributaries, weeds are destroying the networks and the waters now flow in unpredictable directions. People are forced to move to dry land or to IDP camps where there is increased risk of disease transmission.

Is climate change making the situation worse for children?
Absolutely. South Sudan is responsible for just 0.004% of global carbon emissions but ranks 7th (most affected country) on the global UNICEF Children’s Climate Risk Index Report – based on children’s exposure to climate change and environmental shocks.

With increased flooding, there are more mosquitoes. Cholera is a major killer disease in South Sudan, and when flood waters are contaminated, children are at increased risk of contracting the disease. This can lead to dehydration, malnutrition and even death if untreated. In less than two hours, cholera can kill an otherwise healthy adult.

Malaria is another of the biggest killers of children under five, transmitted through the bites of infected female Anopheles mosquitoes. While other countries have eliminated mosquito-borne diseases through good environmental sanitation (primarily drainage), in South Sudan we are focusing on stopping mosquitos from infecting children, in addition to environmental prevention measures. UNICEF distributes large volumes of mosquito nets to families, which are impregnated with insecticide, however, malaria remains one of the biggest dangers to children. Coupled with poor sanitation and malnutrition, children who contract malaria are at a very high risk of dying.

Then there’s trachoma, a bacterium which enters the eyes or nose and can cause permanent blindness if not treated properly. It's one of several Neglected Tropical Diseases still prevalent in South Sudan. Good hygiene, washing hands and face with soap and water can prevent trachoma, but without clean water and good sanitation it is not possible. Clearly in such high-risk environments, for children to be healthy, we need to ensure they have access to safe water and good sanitation.

Why are communities missing out on clean water and how are you changing that?
In South Sudan, 59 per cent of the population lacks access to safe water. With increased flooding, safe water points are submerged forcing people to use unsafe water and children often get sick. We have to work fast in emergencies and develop long-term solutions.

In September this year alone, UNICEF provided life-saving interventions through the provision of access to safe water for 73,647 people, basic sanitation for 52,861 and hygiene promotion benefited 39,903.

Across the country we are installing solar powered water systems which provide affordable safe water with a minimum carbon footprint. We’re building flagship systems in Bor and Torit towns which will be completed in 2023, benefiting over 150,000 people with affordable safe water using green energy sources. Engineering, operation, maintenance, and management are all feasible with low energy cost. We can have a sustainable system which can run without external assistance.

UNICEF has also just completed a large water treatment plant in Juba city which treats water from the river Nile, purifies it and pumps it to host populations in Juba city, including the internally displaced persons camps. The project will have the capacity to treat and pump 4.6 million litres of water per day, providing safe water to over 100,000 people

In the first eight months of this year, we have supported 355,054 people to gain access to safe water supply. But there’s still a long way to go.

Is sanitation poor across South Sudan?
Approximately 75 per cent (three out of every four people) don’t use toilets in South Sudan, up from 61 per cent in 2010. The country is probably the only country in the world where open defecation is on a reverse and negative trend.

Why is progress on sanitation so slow and what is changing?
Over the past few decades, the approach to household sanitation in developing countries has changed. In the past programmes to improve sanitation focused on building toilets, and not on getting people to want toilets.

It’s been over a century since this problem existed in developed countries. In the mid-1800s in western Europe, it was not uncommon to throw human waste onto the street. But as the pathways for disease were better understood, good sanitation became a social norm. In industrialized countries cholera, typhoid, and other waterborne diseases are now a thing of the past and every home has a toilet.

In developing countries, the assumption that simply building latrines would solve health problems has been overtaken by the knowledge that changing the social norm around defecation is the critical step. And in order to own the intervention, people must pay for their own household sanitation.

In South Sudan we are accelerating the process of getting people to adopt good sanitation practices because it's so urgent, but we still need to be patient. You have to sit down with communities and explain why they need to change their behavior and ensure they have ownership.  The more villages that adopt good sanitation, the more will spontaneously happen beside them. Changes are possible if you do it the right way.

Whether you call them’ dunnies’ in Australia, ‘outhouses’ in America, a ‘ben-jo’ in Japan, ‘die toilette’ in Germany, or ‘the jacks’ in Ireland, people need good sanitation to lead a healthy life. But funding in South Sudan is low, and the needs are high.

Do communities want toilets and sanitation?
I’ve seen entire villages build toilets in every house in a couple of months with guidance from UNICEF and our partners. If communities are motivated to improve their sanitation by themselves, without any external financial support, the result is sustainable. After becoming open defecation free by their own means, sometimes villages are motivated to go beyond sanitation. For example, when communities are hit by flooding, they start building their own drainage instead of waiting for someone to help them do it.

How are you building climate resistant sanitation?
In areas where there is a risk of flooding, we advise communities to make the structure of the floor levels higher than the potential flood level. This is especially important for latrines. One of the greatest risks to public health in flooding is overflowing latrine pits. We advocate for simple solutions to the structure of the pit such as a bamboo basket type structure inserted in the pit, which can prevent it from collapsing in a flood.

Why are you and UNICEF so committed?
Initially when you start out in this career, you see a new toilet or water system built and there’s a strong sense of achievement because you know it will save lives. With experience, you start working at scale and the focus shifts to building and strengthening systems. It’s incredible when you consider the potential scale of a successful pilot to impact large numbers of people.

UNICEF is working with the government to set up sustainable management of water and sanitation systems which save thousands of lives. The Government has also committed to making the country open defecation free (ODF) by 2030, which is a huge challenge – we need to change the behavior of 8 million people in seven years! But the whole sector is on board.

So many families in South Sudan have lost everything. They flee to refugee camps or return to their villages which have been wiped out by climate induced floods. Without humanitarian aid, even more children will die. South Sudan is one of the most challenging environments in the world to be a child and access to water and sanitation is a fundamental human right. We will never give up.

From January to 31 August: 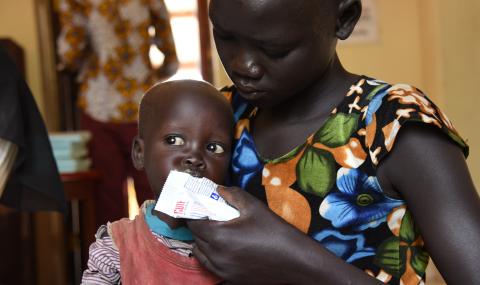 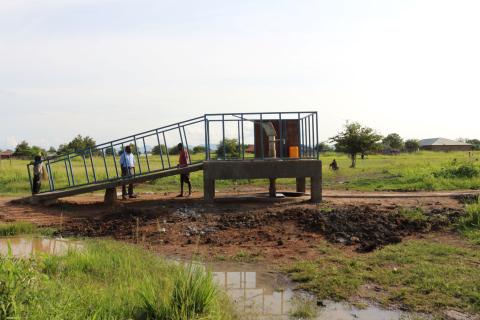 UNICEF helps provide clean water access before, during and after the floods