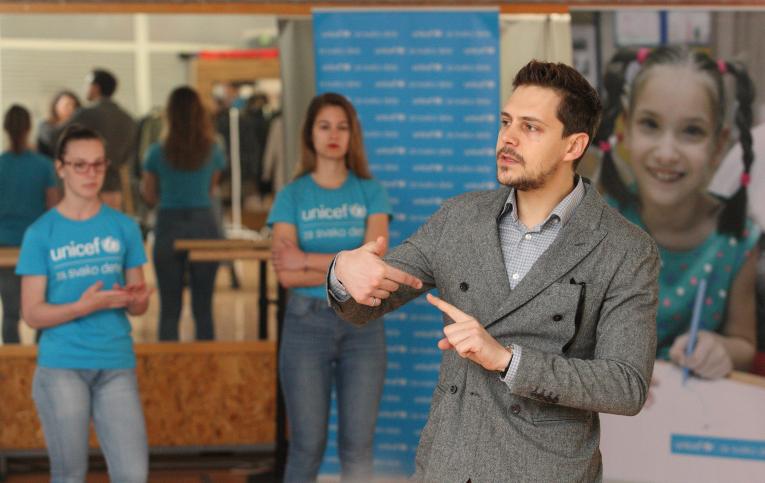 Belgrade, 25 March 2019 - Actor Miloš Biković met with UNICEF Facers to support their engagement. Facers are young people who help UNICEF to reach citizens and convey the importance of its programs for the benefit of children and families in Serbia.

"I want to support the fact that young people have the opportunity to learn, but also the fact that they are taking charge. In this way, they are acquiring new skills, while at the same time working to improve the society in which they live - they are spreading solidarity. I am pleased to see that young people have the opportunity to develop their capacities and to acquire skills that will be useful later in life, and UNICEF is helping them do that", said Miloš Biković.

Facers inform citizens about how they can get involved in UNICEF’s work and thus be part of a community that regularly supports children.

In 2018, thanks to the solidarity and donations of over 30,000 citizens through the Friends of UNICEF Club, 1500 premature and sick babies received improved care in neonatology units in Kragujevac, Niš, Novi Sad and Belgrade, 200,000 children had access to improved early childhood development services in 25 health centers and development counseling units, 7000 children were enrolled in a program to prevent early school leaving which reduced school dropouts by as much as 66% in schools where the program was implemented, and 1700 children were involved in inclusive sports and recreational activities through the "Sport for All" project.