Leave no child behind in Serbia 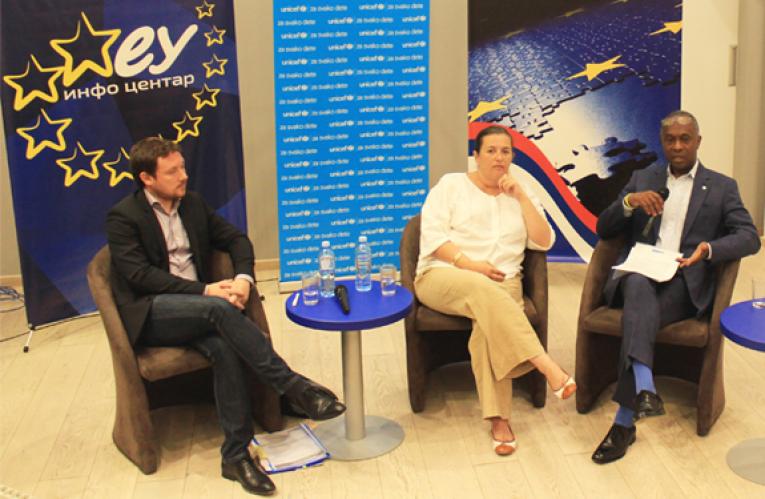 Belgrade, 5 July 2017 - Children and young people are integral to achieving the Sustainable Development Goals (SDGs) set in the 2030 Agenda. UNICEF and the EU are partnering to support the work of national authorities in promoting children's rights as part of the on-going reform process to align national laws and policies to EU standards and to localise the 2030 Agenda.

The EU-UNICEF Expert Training for Key Stakeholders: Leave No Child Behind in Serbia – Integrating Child Rights in Policy Reform and Programming, held today, is part of this on-going effort.

The aim of the EU and UNICEF partnership is to provide practical guidance on how to operationalise a rights-based, child and youth focused approach to policy-making and programming.

Despite enormous progress realized for children since the adoption of the UN Convention on the Rights of the Child in 1989, the rights of millions of children are still being violated every day. This is why the pledge to “leave no child behind” is at the heart of the 2030 Agenda.

“Children and young people are at the heart of almost all of the SDGs. And they focus on reaching ALL children. In order to do this, the UN and the EU are calling for investment in children, particularly young children and the most deprived ones. Ultimately, progress in the condition of children is essential if we are to prevent state fragility and ensure long-term sustainable development, social cohesion, stability and human security at national, regional and global levels” said Michel Saint-Lot, UNICEF Representative in Serbia.

On its path toward EU membership, the Government of Serbia is committed to integrating child rights into its policies.