The best start for every child - support from the earliest childhood

Conference on ‘System Collaboration in Supporting Children with Developmental Risks and Disabilities and their Families: Towards Integrated Early Childhood Intervention Services’ 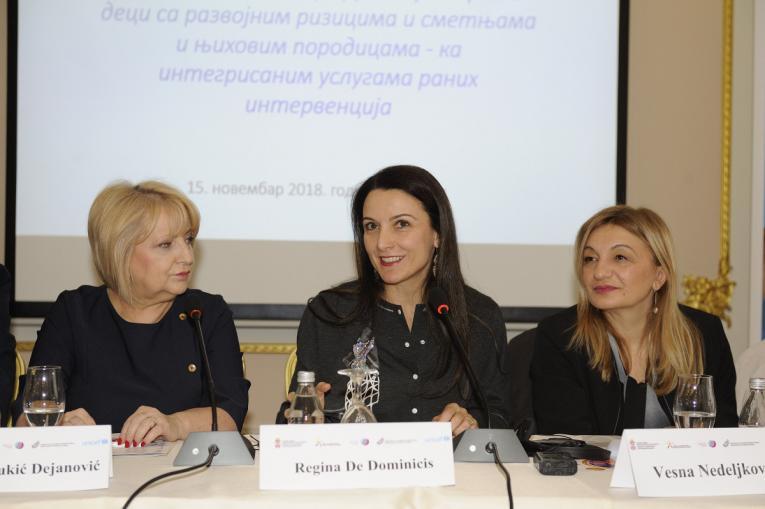 More than 150 conference participants welcomed Prof. Slavica Djukic-Dejanovic, Minister for Demography and Population Policy and President of the Children’s Rights Council of the Government of the Republic of Serbia; Regina de Dominicis, UNICEF Representative in Serbia; Ministry of Health, Education and Social Welfare representatives; and Dragana Sretenov ahead of the programme on early childhood development of the Open Society Foundation office in London.

“Family and the early development of children are one of the priorities of demographic and population policy in Serbia and one of the most important areas of activity of the Children’s Rights Council of the Government of the Republic of Serbia. By signing the Call for Action for the improvement of early childhood development programmes, the Ministers of Health, Education, Labour, Employment, and Veterans and Social Affairs, as well as the Minister for Demography and Population Policy, committed themselves to direct their coordinated action for the benefit of each child and family in Serbia.

In order for different forms and support programmes for families and children to be efficient, high-quality and sustainable, and widely accessible, we need to make certain changes in the functioning of the systems and their institutions, to adapt certain legal solutions, expand the services”, emphasized Prof.  Djukic-Dejanovic.

Every fifth child is in need of support from an early age because they are exposed to biological or environmental risks that have a negative effect on their development and reduce their life opportunities.

“Serbia already has a substantial institutional and programme structure for interventions in early development. Families have access to numerous preventive and support services in health and preschool institutions, centres for social work and local communities.

It is necessary to make additional investments to introduce more efficient and effective work methods that put the family at the centre of the action.

That is why it is important that together we all learn from good examples of other countries, to avoid wrong steps and achieve good savings in resources by good planning and cooperation,” said Regina de Dominicis, UNICEF Representative.

Prof. Anna Maria Serrano from the University of Minho in Portugal, who is also the President of the European Association for Early Childhood Interventions, emphasized the importance of developing an early intervention system in the context of the development of inclusive values of every society and empowering the family as the most important context for growing children.

“Worldwide research indicates that early intervention effects are better if support is provided as early as possible, in supportive and natural conditions, at home or in kindergarten, with the maximum involvement of the family and peers. Interventions should be realized through everyday activities of child and parents, and expert support should be shifted from child to parent and the entire family.

The commitment of all participants and family support providers in the early stages of intervention, early risks identification through paediatric service, as well as the early inclusion of children with developmental delays and disorders in preschool education, are extremely important”, Prof. Serrano said, conveying Portugal’s experience in developing one of the most efficient early intervention systems in Europe.

Practitioners from Belgrade, Leskovac and Nis, and members of intersectoral and multidisciplinary local teams for the development of early intervention systems support presented the way early childhood intervention services are administered in Serbia.

Over the next two years, with the support of UNICEF and the programme on early childhood development of the Open Society Foundation’s London office, an agreed early intervention model will be applied in Kragujevac and Leskovac, and later transferred to all municipalities in Serbia.