On the day Fatima Suleiman, a 40-year-old volunteer community mobiliser (VCM) in Borno, north-east Nigeria, rolled up her sleeve to receive her first dose of the COVID-19 vaccine, dozens of women from the community where she works accompanied her to the clinic.

“They wanted to get the vaccine too,” said Suleiman, a widow and mother of eight who works in Maisandari. “But they couldn’t because they are not health workers. Vaccination in Nigeria is still for health workers only – but the women made me promise to inform them when general vaccination commences and said that I should be there with them when they receive their first shots. I agreed.’’

For many people who know Suleiman, the spectacle at the Yerwa Clinic is not surprising. As a former polio vaccinator and roaming health worker, Suleiman has been a part of Maisandari for six years. The VCM promotes the benefits of birth registration, routine immunization as well as ante-natal and post-natal care attendance to women and men.

Suleiman is one of 2,046 community mobilisers engaged by UNICEF to reduce infant and maternal mortality in 101 wards of Borno State. Her weekdays are busy with daily visits to women in homes and to health workers in nearby clinics. Her popularity with children and women has earned her a chieftaincy title from elders of the community, who fondly refer to her as the Maman Yara of Maisandari.

“The title means the ‘mother of children’. But my most memorable experience as a health worker in Maisandari happened when a woman was experiencing a difficult childbirth at home. She refused to go to the hospital and her neighbours secretly called me to come,” said Suleiman.

“I rushed to her house and assisted in the delivery of twin babies. I was able to convince her husband to take her to the hospital after the delivery. It was clear to everyone that the woman and her babies could have died if I was not called,” she said. “I thank my community members for their support and getting in touch with me whenever the need arises.”

Suleiman says receiving the COVID-19 vaccine at the Yerwa Clinic in Maiduguri is a validation of her belief in the power of immunization to protect children and adults against diseases. Prior to becoming a VCM, she had tirelessly combed the streets of Maisandari for months, immunizing children against the deadly poliomyelitis.

She says that receiving the vaccine is both a protection from COVID-19 and a demonstration of her work as a vaccinator and health worker.

“As a VCM, it is expected of me to live by example – that’s why I took the vaccine. I also wanted protection from the virus,” said Suleiman. “I was not afraid at all to take the vaccine; I was happy that it's available here in Nigeria now. I didn't feel any reaction after taking the vaccine and I encouraged my community members to also take theirs.”

A story of resilience

For years now, the health worker has found purpose improving the wellbeing of women and children in and around Maisandari. But like many women in north-east Nigeria, Suleiman has experienced personal and agonizing consequences of armed conflict.

“My husband was killed along the Maiduguri-Damaturu road by non-state armed groups in 2015. He was on his way to Kano when he was abducted and killed. I was left to raise and cater alone for eight children. It has been difficult, but I have accepted his death in good faith,” said Suleiman.

“I was a polio vaccinator for two years and then I became a VCM. UNICEF is supporting my colleagues and me with a monthly stipend, and I started a small poultry farm last year to boost my income. All my children are in school and Alhamdulilahi (thank God), we are all doing well,’’ she added.

Through her work, Suleiman is contributing to the reduction of deaths from childhood diseases in Maisandari. Aside from household visits, one of her major health promotion tools is the monthly women’s meeting she leads in the community.

“It is a forum where we encourage and advise women who are going through challenges. The meeting welcomes widows, divorcees and married women. We raise awareness on health promotion and economic empowerment. We believe women should support their families by generating income, no matter how small,’’ she said. 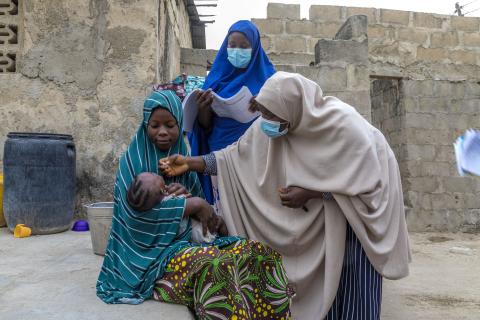 It's been three years now and Nigeria has not recorded a single case of wild polio. A network of frontline workers has been instrumental in achieving this. 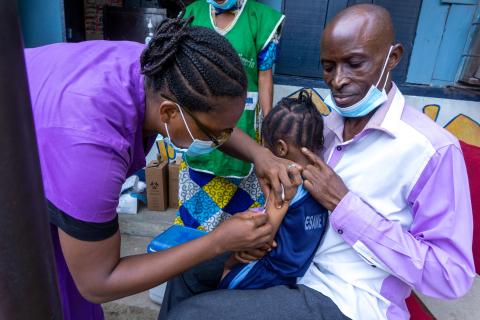 Integrated vaccines, a path to full immunization in Nigeria 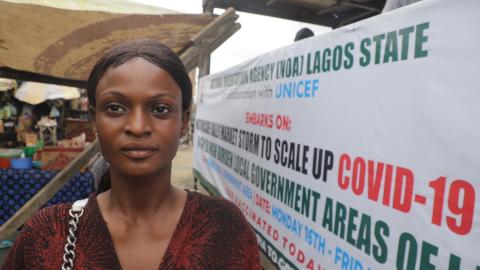 With the support of the UN Basket Fund, UNICEF is helping Lagos state make the vaccines available in famous local markets for eligible populations. 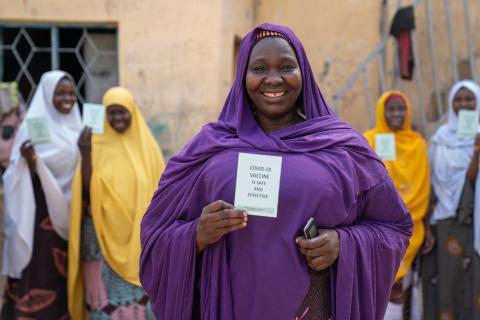 Vaccination is a lifesaver