Cost of absenteeism due to air pollution among private sector companies in Ulaanbaatar, Mongolia

Ulaanbaatar, Mongolia, is both world’s coldest capital city and among the world’s capital cities with the highest level of seasonally polluted air during winter. Over 80 percent of this seasonal air pollution is due to domestic heating with coal stoves in residential communities known as ‘ger districts’ due to the prevalence of traditional nomadic housing used in these areas. This report presents the direct and indirect costs of winter seasonal air pollution due to employee absenteeism in the private sector. In winter 2019, UNICEF convened a meeting in Ulaanbaatar, at which human resource (HR) officials and high-ranking executives from several well-known Mongolian corporations shared their opinions on how winter air pollution impacts absenteeism rates among their employees. Through this meeting, UNICEF postulated that absenteeism must be a significant driver of ‘hidden’ opportunity costs, affecting not only corporate bottom lines but also employee financial well-being.

The design of the study included creating inclusion and exclusion criteria. These criteria encompassed business type, employee numbers, availability of employee attendance records, format of records, quality and completeness of records, and willingness to share records. Representatives of employers and select employees were surveyed using quantitative and qualitative instruments to characterize direct and indirect costs, and absences due to illnesses that are common during highly polluted months.

The sampling design of the study was purposeful sampling. Data from between 2015 and 2019 were analysed, from a total of eight companies and including a total of 2,764 employees. Almost all of the companies used fingerprint scanners that link each employee to a payroll number. Questionnaire data was obtained for 1,330 employees working for private sector companies spanning six economic sectors. A total of 133 people participated in 26 focus group discussions and 20 people completed individual interviews.

The main purpose of this study was to assess both direct and indirect hidden costs to private sector companies as well as individual employee costs associated with absenteeism due to air pollution in Ulaanbaatar, Mongolia.

The results of the study show that the combined direct and indirect hidden costs of absenteeism identified as being related to wintertime air pollution are significant for both employees and employers in the private sector in Ulaanbaatar, Mongolia. The major drivers of direct cost to employees identified were health-care expenses, including doctor visits, medication, hospitalization and transportation, in addition to loss of earnings. Although the employees surveyed were evenly divided by gender, it was found that the cost of illness-related absences was disproportionately higher for female workers, especially those with young children. The major hidden cost drivers for employers were the number and human capital costs of employee absences. 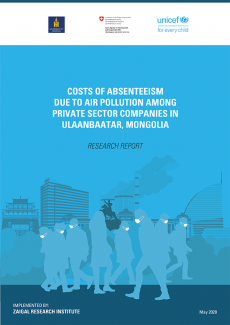