UNICEF installed loudspeakers to broadcast remote lessons in communities without internet or television signals, guaranteeing access to remote education for children and teenagers in the Peruvian Amazon.

UCAYALI, Peru – One of the things Richard Guimaraes Camayo enjoys most about living in his community in the Peruvian Amazon is getting together with friends and playing football. Both things used to happen mainly at school, but the arrival of the pandemic changed everything in Nuevo San Rafael, a Shipibo community in the Amazonian region of Ucayali, two hours by river from the city of Pucallpa, that this 15-year-old calls home.

“We couldn’t talk to our teacher and I felt sad and worried. We couldn’t see each other, we can’t do group projects”, he laments.

The coronavirus hit this area especially hard: shortly after the first case had been detected, the region became one of the most affected in the country. Richard -- whose Shipibo name is Soi Nita, meaning “man who knows” -- is the second of five brothers. He recalls when his father became the first in the family to fall ill with COVID-19; followed by him, his mother, and, finally, his younger sister.

In Nuevo San Rafael, houses are generally open -- lacking fences or even walls to separate them completely from the next home -- and the use of common spaces like the football pitch, the farms, or the areas where women come together to embroider and design are commonplace. That’s where families greet each other, where children meet to play, and where Richard chats with his friends. With the arrival of the pandemic, everything fell silent.

Something similar happened with the community’s high school, where the doors remain shut. The empty classrooms with scattered chairs used to hold around 40 students like Richard. After months of silence, however, -- recently -- the school bell rang once again.

The challenge of learning at home

With a State of Emergency declared and all schools shut by the pandemic, the Ministry of Education launched “I Learn at Home”, a national strategy for remote education for children and teenagers.

UNICEF advised authorities on the implementation of a strategy so that it would respond to the needs of students living in rural and indigenous communities: Peru is home to 48 indigenous languages and I Learn at Home lessons are available in Spanish and nine indigenous languages.

“In the rural areas of Peru, we have approximately 1.2 million students, half a million of which belong to indigenous peoples. Thus, through radio, we’ve decided to provide the service of intercultural bilingual education”, explains Nora Delgado Díaz, Director of the Department of Alternative Basic, Intercultural Bilingual, and Rural Education Services.

Lessons from I Learn at Home -- reaching a majority of students across the country -- are published online and broadcast on television and radio. But in Nuevo San Rafael, as in other remote communities, children and teenagers could hardly access the material due to a lack of internet and television connectivity. While radio frequencies reach the community, “very few families own radios and radio signals reach a select few points in the area”, as Gisella Godier, Regional Coordinator for UNICEF in Ucayali, explains. Further complicating matters, electricity is not available 24 hours a day and a majority of families live in poverty or extreme poverty, making radio equipment prohibitively expensive.

These problems affect many children and adolescents in rural areas, making them especially vulnerable to academic delays and school desertion.

In response, UNICEF delivered four loudspeakers to local authorities to expand access to the educational programmes broadcast over the radio. In September, the loudspeaker reached Nuevo San Rafael, changing the lives of Richard and the community’s other youths.

Teaching from the tallest tree

Nuevo San Rafael chose to install the loudspeaker atop one of the community's tallest trees -- next to the school cafeteria. All around, students gather by turns and in small groups to listen to the content in each subject area.

Broadcasting the recorded lessons is another challenge in this community: the files containing the classes are copied to a USB memory stick, which a teacher transports from Pucallpa to Nuevo San Rafael. Once in the community, a small electric generator purchased collectively by the parents starts humming, the memory stick is connected, and the voices of teachers fill nearly every corner of Nuevo San Rafael.

Certainly, simply listening to classes is sometimes not enough and students benefit from being able to ask questions and be guided by teachers. But students in Nuevo San Rafael are lucky to have one of their teachers -- deeply committed to their learning and development -- living in the community and able to join students daily for additional support.

The installation of the loudspeaker has brought a certain degree of normality back to Richard’s life: he can continue with his studies, connect with his classmates, and complete group assignments. Regaining contact with the educational system is vital both to avoid academic delays and school desertion. Moreover -- for this teenager -- it’s a way of imagining a brighter future: “When I’m done with school, I want to keep studying at university and complete three degree programmes to help my family and community”.

COVID-19: A generation of children in Latin America and the Caribbean are missing out on schooling 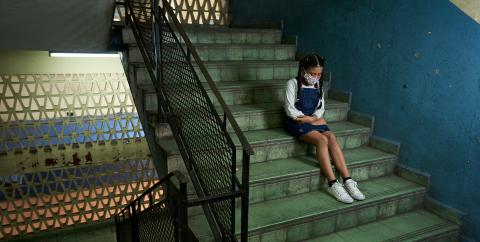 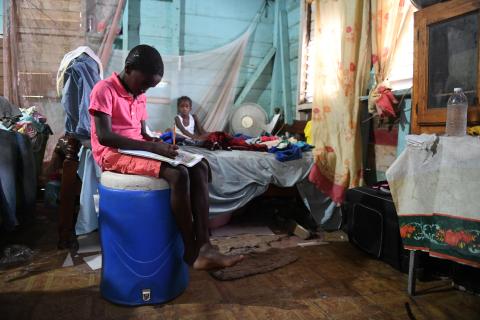 An online programme for teachers supported by UNICEF aims to improve remote learning best practices on the island, where schools were closed due to COVID-19 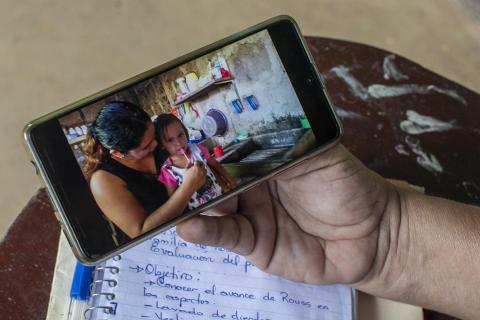 In the midst of the pandemic, therapies for children.

The continuation of treatment in times of coronavirus is critical for disabled children and their families.