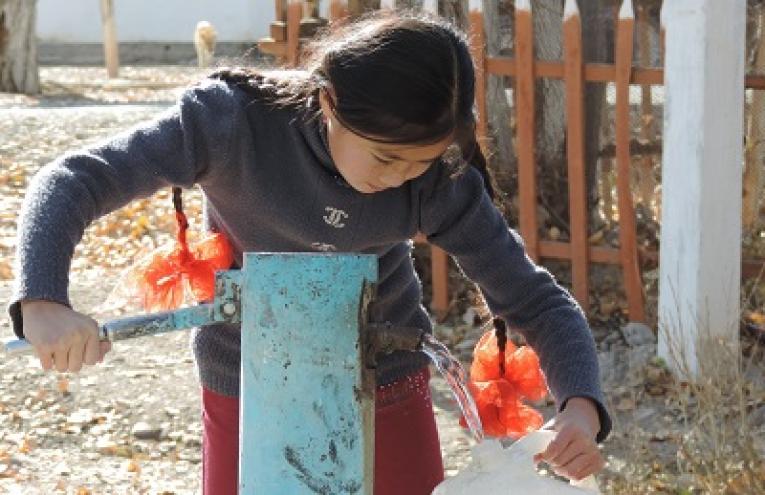 BISHKEK, 22 March 2017 – Some 600 million children – or 1 in 4 children worldwide – will be living in areas with extremely limited water resources by 2040, according to a UNICEF report released on World Water Day.

The report, Thirsting for a Future: Water and children in a changing climate, looks at the threats to children’s lives and wellbeing caused by depleted sources of safe water and the ways climate change will intensify these risks in coming years.

“Cimate change will reduce water supply in certain regions, which will make it more difficult to provide children with the water they need for their survival, health and well-being. During the last 20 years, the average temperature in Kyrgyzstan has increased from 4.8°C to 6°C. According to the most pessimistic estimates, the average temperature in Kyrgyzstan could increase by 8°C during this century. Due to its geographical location, Kyrgyzstan is one of the most vulnerable countries to a changing climate in Central Asia,” - said UNICEF consultant on climate change Nicholas Molyneux.

According to the report, 36 countries are currently facing extremely high levels of water stress, which occurs when demand for water far exceeds the renewable supply available. Warmer temperatures, rising sea levels, increased floods, droughts and melting ice affect the quality and availability of water as well as sanitation systems.

“Water is elemental; without it, nothing can grow. But around the world, millions of children lack access to safe water -- endangering their lives, undermining their health, and jeopardizing their futures. This crisis will only grow unless we take collective action now,” said UNICEF Executive Director Anthony Lake.

Population growth, increased water consumption, and higher demand for water largely due to industrialization and urbanization are draining water resources worldwide. Conflicts in many parts of the world also threaten children’s access to safe water.

All of these factors force children to use unsafe water, which exposes them to potentially deadly diseases like cholera and diarrhoea. Many children in drought-affected areas spend hours every day collecting water, missing out on a chance to go to school. Girls are especially vulnerable to attack while collecting water.

The poorest and most vulnerable children will be most impacted by an increase in water stress, the report says, as millions of them already live in areas with low access to safe water and sanitation.

The report also notes that:
· Up to 663 million people globally do not have access to adequate water sources and 946 million people practice open defecation.
· Over 800 children under the age of five die every day from diarrhoea linked to inadequate water, sanitation and hygiene;
· Globally, women and girls spend 200 million hours collecting water every day.

The impact of climate change on water sources is not inevitable, UNICEF says. The report concludes with a series of recommendations that can help curb the impact of climate change on the lives of children. Such measures include the following:
· Governments need to plan for changes in water availability and demand in the coming years; Above all, it means prioritizing the most vulnerable children’s access to safe water above other water needs to maximize social and health outcomes.
· Climate risks should be integrated into all water and sanitation-related policies and services, and investments should target high-risk populations.
· Businesses need to work with communities to prevent contamination and depletion of safe water sources.
· Communities themselves should explore ways to diversify water sources and to increase their capacity to store water safely.

“In a changing climate, we must change the way we work to reach those who are most vulnerable. One of the most effective ways we can do that is safeguarding their access to safe water,” Lake said.

Note: Thirsting for a Future: Water and children in a dangerous climate is the third in a series of reports issued by UNICEF on the impact of climate change on and its effect on the lives of children. The reports include recommendations for how to minimize these impacts and help achieve the Sustainable Development Goals on climate action. The other reports are Clear the Air for Children and Unless We Act Now.