Financial stability and job creation top concerns for Iraqis, according to the newly launched national adolescent and youth survey 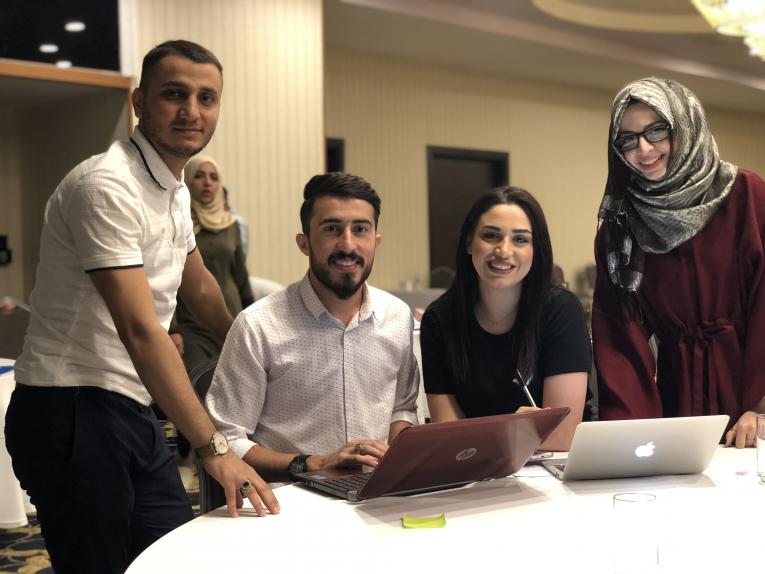 3 May 2020, Baghdad, Iraq – This month the Government of Iraq with the support of UNFPA and UNICEF, unveiled the results of its National Adolescent and Youth Survey. The survey was the first of its kind in over a decade, with the last survey taking place in 2009. Its aim is to enable the Iraq Federal Government and the Kurdistan Regional Government to develop adolescent and youth-centered policies based on what adolescents and youth see as priorities.

“Young people are the innovators, creators, builders and leaders of the future. But they can only live out their full potential if they have skills, health and choices in life and most importantly, an adequate system that meets their inspirations,” explained Ms Marta Ruedas.
Iraqis between the ages of 10 and 30 were asked about a range of key thematic issues affecting their lives, including health, education and civic engagement. According to the survey, 39% expressed worry about their future financial security and employment prospects. With over a quarter of Iraqis between the ages of 15 and 30 jobless, Iraq is one of the countries with the highest youth unemployment rates in the region.
“The results show that young people have a clear understanding of citizenship, political and social life and livelihoods as well as their rights and obligations. The survey will be the basis for a clear and transparent process to put together youth-based policies,” said the Minister Taleb.
For his part, Dr Nouri Al-Dulaimi elaborated further, adding that his ministry, like other ministries, “will continue to provide developmental opportunities for young people as part of the national development strategy to achieve the 2030 Sustainable Development Goals”.

The findings also brought some welcoming news on gender equality. 70% of those surveyed refused to resort to violence with their partner in comparison to only 54% in 2009, and 83% stated that decisions about child spacing and pregnancy should be jointly made between the couple.
“Young people in Iraq are embracing gender equality and are longing for policies that will meet their aspirations. With concrete data at hand, the Government, with the support of the United Nations, has the responsibility to turn the positive trends highlighted in the survey into concrete policies and actions to protect young girls from all kinds of harmful practices and enable young people to make informed decisions about their reproductive health,” noted Dr Sogunro, UNFPA Representative.

Iraq’s population is one of the youngest in the world and has the fastest-growing population in the region. Adolescents and youth are expected to reach 16.4 million people, which will make up 31% of the total population by 2030.If harnessed properly, this can be a historic opportunity for the government to get the most from its young people by investing in job creation.“This population will be a powerful force for economic growth, decision-makers should listen to what young people are telling us and adopt adolescent and youth-friendly policies that create conditions for them to participate in decisions that influence their futures,” said the UNICEF Representative Hamida Lasseko.

A total of 33,000 Iraqis between the ages of 10 to 30, participated in the survey in all of Iraq’s provinces from February to April 2019. The Central Statistical Organization and the Kurdistan Regional Statistics Office conducted the survey in coordination with the Ministries of Planning, Ministry of Sport and Youth and Ministry of Culture and Youth in the Federal and the Kurdistan Region respectively and with the technical support of the UNFPA, UNICEF and with the financial support from the Swedish International Development Cooperation Agency – SIDA.

On International Youth Day, the Ministry of Youth and Sports and UNICEF officially launch the ‘Learning Passport’ digital platform to benefit 100,000 young people in Iraq