Why (and how) early education works for displaced children

19 April, Sefina Iser, six, who was displaced from her home due to conflict, is now learning … and learning fast. She knows how to read and write in just three months. When a displaced community suffers discrimination, violence and trauma, hope is found for the youngest affected children through quality early education.

Sefina Iser, six, proudly demonstrates how to write her name, something she could not do three months ago. “I want to learn” she says. Sefina and other young pre-primary aged children at Meda site for Internally Displaced Peoples (IDP) in south eastern Oromia region, Ethiopia can be seen smiling, singing, counting, reading, and even confidently taking turns to lead classes for other young children through a variety of learning games.

But just last year the story was very different for Sefina and other young children at Meda IDP site. Their previous home sat on the border of the Oromia and Somali regions of Ethiopia, an area plagued with ethnic violence. This border region has experienced a surge in conflict over the past few years, causing thousands of families to leave their homes. In January 2018, there were 1,739,431 IDPs with children comprising 60 per cent. Of these, 1.2 million were displaced due to conflict, including Sefina and her classmates.

The IDP children have been through traumatic events – things that no child should have to experience, especially the youngest of children. Many children have become the victims of the violence and are paying an indirect price for the conflict.

These young children are at a great risk for developing cognitive, behavioural and emotional difficulties later on in life. Such children affected by conflict are more likely to drop out of school, start school late, experience academic failure and develop socially aggressive behaviours.

But for the Meda IDP community, this pattern of conflict and trauma can end. Their next generation, including Sefina and her classmates, are now developing a foundation to education – through quality pre-primary classes, something none of them have ever experienced before.

“I want to learn” says Sefinaa Iser. She joined the Accelerated school Readiness and Child-to-Child  class in January and recently graduated after three months of learning.

Sefina and 367 other children in her community just completed three months of Accelerated School Learning (ASR), an Early Childhood Education (ECE) programme developed and implemented by UNICEF and NGO-partner, Imagine1day. Sefina learned how to read and write for the first time, and in her mother tongue, Afaan Oromo. She can now identify shapes, numbers, letters, and animals, and most importantly, gain confidence to speak in front of strangers, overcome and heal from traumatic events, and inspire others to continue their education.

Ms. Abshiru Ibro, Sefina’s teacher further explains, “They were unable to speak or count at first. But now they sing, count, write and even keep trying to learn when I am not here!” (referring to children leading the class while participating in the interview).

The psychosocial support that early education brings is substantial, as Abshiru explains, “There are about three kids in my class who still fear new people. They cry a lot when new people come. I tell them that the new people are like us and they don’t want to hurt us. The training gives me important skills to help them, by using [for example] play, story-telling, puzzles, and color and matching games.”

And Sefina’s learning doesn’t stop after three months of ASR. Since formal primary school doesn’t start until September, UNICEF and Imagine1Day initiated the Child-to-Child (CtC) programme in the IDP camp to fill the four-month gap. CtC is an initiative that brings older children (in grades five, six or seven), known as ‘young facilitators,’ to continue teaching the younger children. Sefina’s new CtC ‘young facilitator,’ Aliyi Hussein, is from the host community (Meda town) and will travel to the IDP site each weekend to continue lessons so Sefina can be well prepared for primary school.

The work could only be done with the support of various partners on the ground. While UNICEF developed the ASR and CtC programmes, produced the learning materials, oversaw the implementation, and provided financing and monitoring support, Imagine1Day was the main implementor of the project who identified, hired, trained, and organized the ASR facilitators. They also organized the construction of classrooms, registering of students, and other mentoring and monitoring support to ensure efficient implementation.

Host communities and local governments offer tremendous support by providing food rations, clothing, and tarps to protect the schools and homes from rain, among other survival items. When communities from the Medawalabu Woreda heard about the conflict, people jumped at the opportunity to help.  Many offered their skills as teachers and facilitators (like Sefina’s ASR and CtC teachers), others provided transportation support, and some even gave their livestock to IDP families. The IDP community does what they can with the little they have, by building the classrooms from local materials, clearing bushes and trees for play areas, and mobilizing their children to go to school.

“Changing the outcomes for the next generation”

Now, young IDP children, like Sefina, have a chance to change the outcomes for the next generation. Through ‘playful’ early learning and psychosocial support, their generation will be educated and have the behavioural and emotional skills to foster more peaceful and fruitful societies.

Through its emergency programming, UNICEF is delivering quality pre-primary classes though ASR and CtC to 7,283 IDP children in Ethiopia. 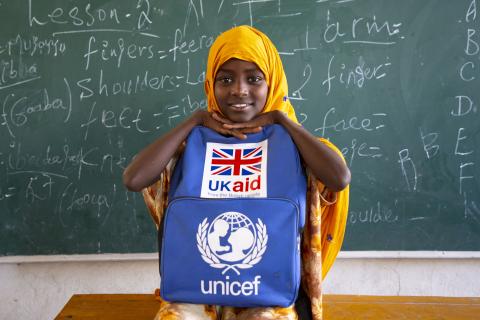 "I thought I had lost everything because of the floods"

The 'Bete - My Home' programme is supporting children facing humanitarian emergencies in Ethiopia. 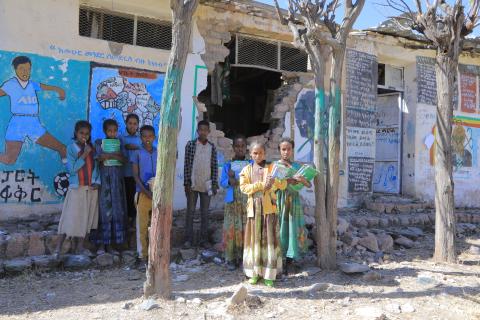 Despite challenges, UNICEF and partners are supporting child

As a result of the conflict in northern Ethiopia, over 6,000 schools have been completely or partially damaged and looted...

“I want to be a financial tycoon and I wish to work in a big cooperate bank,”