How a preference for sons fuels gender-biased sex-selection

The halls of the elementary school in Vardenik, the largest village in Gegharkunik, Armenia, are adorned with pictures of fallen heroes from past battles – all of them men. Here and there, we see a few posters of famous Armenian writers, athletes, scientists and musicians. All but one of them are male.

The absence of females is visible beyond the pictures on the walls. It is also seen in classrooms in many parts of Armenia, where there can be up to four boys for every girl. Whether it’s on the walls or in the classrooms, girls are missing.

Armenia has one of the highest rates of gender-biased sex selection (GBSS) in the world. And as a result, girls are missing from families, classrooms and communities. GBSS is a form of violence against girls that is notoriously difficult to report on. In 2018, however, 111 boys were born in Armenia for every 100 girls. In that year alone, 424 girls were ‘missing.’ Over the past 7 years, it is estimated that more than 4,000 girls who would have been born in Armenia were not, due to the persistent preference for sons. That represents 4,000 losses – of life, of opportunities, and of potential.

When asked exactly why this is happening, teachers and administrators at the elementary school in Vardenik shrug. Many say that couples are having fewer children nowadays. “There’s no work, it’s very hard to feed a family,” says a fourth-grade teacher, who prefers to remain anonymous, “so young families nowadays stop at two, maybe three. Before, they would keep trying until they had a boy.” While speaking directly about gender-biased sex-selection (GBSS) is considered taboo, she suggests that if couples have “fewer tries” they will terminate pregnancies with female fetus to ensure they have a son.

Such responses are in line with key findings from groundbreaking research that explored the causes and impact of a preference for sons in Armenia, commissioned by UNICEF and conducted from 2017 to 2019 by researchers from Brown University, ETH Zurich and the University of Lausanne. The findings reveal three key factors that are working in combination to fuel a gender imbalance so severe that many girls are missing: falling fertility rates, easy access to ultrasound technology, and deeply entrenched norms that still value sons more highly than daughters.

The findings confirm that families in Armenia use two methods to guarantee the gender distribution they want in their children: modern-day GBSS, using ultrasound scans to identify female fetuses and terminate pregnancies; and the more traditional strategy of only having children until you have at least one boy.

Couples in three areas covered by the study (Vardenik in Gegharkunik province, Syunik province and Yerevan) showed a clear bias in favour of sons and, at the same time, a desire for a balanced gender distribution. However, sex selection only seemed to happen in families that had no sons. The study found that families that had a first- or second-born son were 50 per cent less likely to have more than two children. In sharp contrast, parents were far more likely to keep having children after the birth of a daughter. As a result, the last child in more than 60 per cent of all the households studied was a boy.

According to a 2006 study published in the scientific journal PNAS on abnormal sex ratios in human populations, the ratio at birth is remarkably consistent across human populations (if there is no manipulation), with 105-107 male births for every 100 female births. Indeed, the ratio in Armenia was close to this natural level before the widespread availability of ultrasound technology, and the country remains broadly in line with this ratio when it comes to the first two children in a family.

A second-grade teacher in Vardenik, who asked to to remain anonymous, observes, “Have you noticed how many men in our village aren’t married? They can’t find wives because there are so few women in our village.”

So, why the son preference?

A preference for sons is found across regions and social levels in Armenia, according to the UNICEF-supported research. Time and time again, parents, teachers and residents in the three regions raised the same themes around the preference for sons.

Vladimir Melqonyan, a father of three girls in Gyumri, Armenia’s second largest city, displays the family tree that his father created with pride. His love for his daughters is clear but, as he explains, he still wants a son to continue the family line. When asked if he would include his daughters in the family tree, he is not convinced it makes much sense. “I can include my daughters’ names,” he says, “But their children won’t be in our tree.”

Elsewhere, Margarit Piloyan, a mother of three daughters in Gyumri, echoes that view: “On a family tree, they write in the boys’ names but just put an apple for the girls.”

Researchers in the study asked individual wives, husbands, the mothers of husbands for their emotional and stereotypical reactions to pictures of families consisting entirely of girls or boys. First, they were asked to pair the pictures with words associated with “joy” and “sadness” or “flourishing” and “withering”. Respondents showed no preference or only a slight preference for boys.

The same pictures were then paired with words associated with “flourishing” or “withering” in relation to the continuity of the bloodline. This time, there was a significant preference for the pictures of families with boys, suggesting that a strong bias kicks in when bloodline is added to the discussion. The research also found that sons are seen as remaining “part of the family,” while daughters are perceived as leaving the family to join another family through marriage.

Fathers Harutyun Darbinyan, from Yerevan, and Mkrtich Hovhannisyan, from Gavar, each have four daughters. Both believe that a child is a child and have ignored societal pressures to manipulate family planning based on gender bias. Both men also know, however, that these pressures can be considerable, explicit, implied, and often conveyed in jest, through jokes among men.

“Real men have sons,” is one common saying Harutyun has heard from his friends. “When my friends say this to me, I tell them, ‘Men have sons, but real men have daughters.” After his second daughter, Susanna, was born, friends who had sons started joking, “Let me show you how it’s done.” He doesn’t take such comments to heart, he says, “but sometimes I give them a piece of my mind.”

Mkrtich is an army veteran. He left school at 16 to join the military and lost his left hand in battle.  “Boy, girl - what difference does it make?” he asks. When his wife, Hasmik, was pregnant with their third daughter, childhood friends were among those who urged the couple to end the pregnancy. “People say all sorts of things,” he says, “but I stick to my principles.”

Similarly, Margarit, the mother of three girls in Gyumri, recalls, “When people found out I was expecting a third, they kept asking, ‘Have you checked the gender?’ And I said no, even though I had, so I wouldn’t have to deal with them.

UNICEF and partners are working to address GBSS through the Missing Girls research project, also advocating for policies and programmes to end all forms of violence against women and girls in Armenia, including GBSS. The research confirms that tackling GBSS means challenging and changing gender norms, not only for girls and women, but also for boys and men. It means mobilizing the public and civil society as well as the Government and mass media.

“When my fourth daughter was born,” says Harutyun, “I took a magharich [a celebratory gift] to work. People were surprised. They were saying, ‘Why are you celebrating your fourth daughter?’ I posted online: ‘My 4th miracle was born!’ And the comments quickly rolled in: ‘Wow, you had a son! Congratulations!’ I replied, ‘My girls are my miracles.’”

In 2020, UNICEF Armenia is working with a national broadcast partner to air a special TV series to tackle gender norms and preferences linked to parenthood. Decades of behavioural research show that, as a popular form of media consumption, such edutainment approaches have succeeded in influencing social norms. UNICEF hopes the TV series will resonate with youth and young parents, opening up the topic on their TV screens and raising questions about choices and behavior linked to gender norms. UNICEF also plans to work with teachers and other education professionals to expand their skills on inclusion and gender roles, aiming to enhance teaching practices in the future to change current norms around girls and boys. 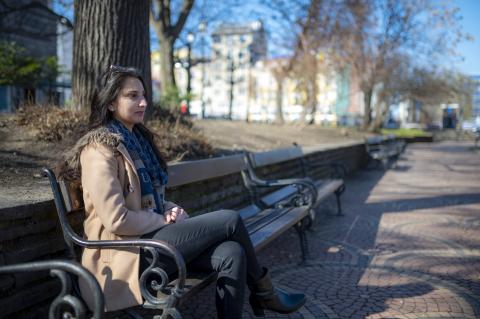 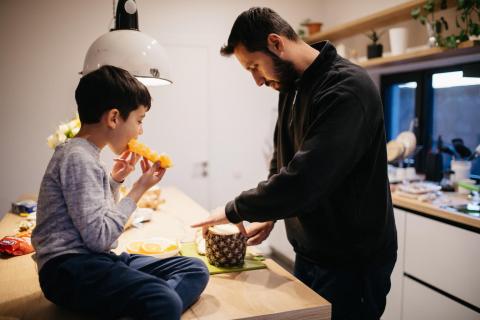