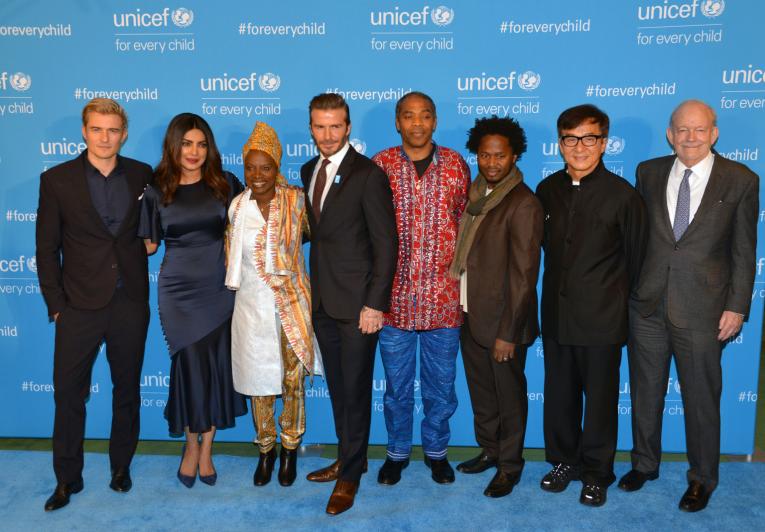 NEW YORK, 12 December 2016 – UNICEF commemorated 70 years of tireless work for children today with the help of some of the organization’s best-known Goodwill Ambassadors and celebrity advocates at a ‘children’s takeover’ event co-hosted by 12-year-old Millie Bobby Brown and featuring children and young people who have benefited directly from UNICEF’s efforts.

"My involvement with UNICEF began almost 10 years ago in India. Today, I stand here humbled, enriched and committed, because of it.  Thank you, UNICEF, for the amazing journey so far as well as this huge honor,” said UNICEF Goodwill Ambassador Priyanka Chopra. “Along this decade old journey, with UNICEF, I have been on many field trips to villages and centers across India. On those trips, I spent time with numerous young girls and their families and experienced firsthand the transformative power of empowering young girls with opportunities that are rightfully theirs. Together, with my fellow, dedicated ambassadors, I am now proud to stand with UNICEF to help build a world where children’s rights are respected and protected.”

Ms. Chopra has served as a UNICEF national ambassador in India, where she has been an intrepid advocate for girls and adolescents. Celebrating her appointment, UNICEF Executive Director Anthony Lake said, “Priyanka Chopra is already a champion for India’s children -- and as a UNICEF global Goodwill Ambassador, she will be a force for children and adolescents everywhere.”

The anniversary celebration, which was led by the next generation of young celebrities and other young people, powerfully demonstrated the impact of UNICEF’s work over seven decades to protect the rights of the world’s most vulnerable children.

“This celebration of UNICEF’s 70th anniversary belongs to those for whom UNICEF was created in the first place: children. And it also belongs to the thousands of UNICEF staff and our partners whose work in some of the world’s most dangerous and difficult places has touched the lives of millions of children. What can be more important?” said UNICEF Executive Director Anthony Lake.

People’s Choice nominee and star of hit television series Stranger Things Millie Bobby Brown served as the evening’s co-host and interviewed international soccer star David Beckham about what he has seen and learned over the course of his 11-years as a Goodwill Ambassador. Rising young Broadway star Akira Golz and UNICEF Youth Advocate Chen Lin were also co-hosts at the event. Together they represented the future of UNICEF and its work for every child.

The programme also featured Juan Carlos, a 27-year-old lawyer from El Salvador, who recalled how UNICEF helped him after he lost his limbs when he stepped on a buried landmine at the age of five years old. He now advocates for the rights of children with disabilities, working to help break down the barriers and inequities they often face.

Livey Van Wyk, a mother living with HIV, spoke about her experience fighting stigma, She was accompanied on stage by her 13-year-old son, who is HIV-negative thanks to UNICEF’s work in Namibia to prevent HIV transmission from mothers to their babies.

“UNICEF was established to bring help and hope to children whose lives and futures were at risk.  Our mission is no less urgent today,” said Mr. Lake. “As UNICEF gives children hope, children are the world’s hope for a better future -- for all of us.”

UNICEF was established in 1946 by the United Nations to safeguard the lives of children struggling to survive in the aftermath of World War II, and in doing so, help rebuild destroyed societies and restore hope for a better future.

Today, the organization continues to work tirelessly in the world’s toughest places to bring life-saving aid and long-term support to children whose lives and futures are endangered by conflict, crises, poverty, inequality and discrimination.

Immense progress for children has been achieved in recent decades. Since 1990, the number of children dying before their fifth birthday halved and hundreds of millions of children have been lifted out of poverty. Out-of-school rates among primary-school-aged children have reduced by more than 40 per cent between 1990 and 2014.

• The publication of a new book, For Every Child, Hope: UNICEF@70 1946-2016, which captures 70 years of the organization’s work for the most vulnerable children;
• The launch of a new global institutional identity under the umbrella concept, UNICEF for every child, that underscores the universality of UNICEF’s mandate and the urgent need to reach the most vulnerable and excluded children; and
• The relaunch of UNICEF’s global website, www.unicef.org. 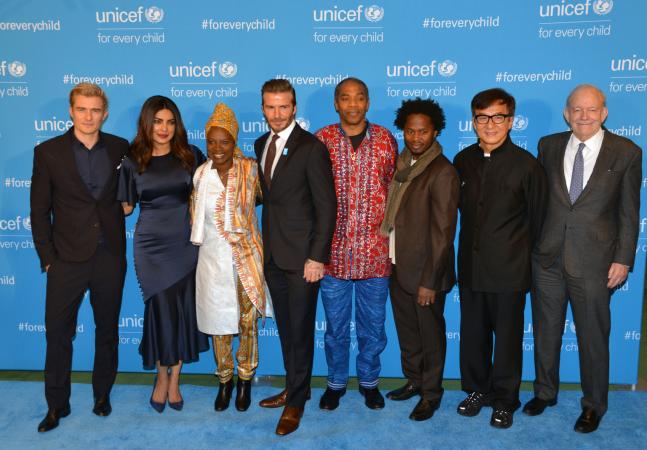