Moving Beyond Detention for Adolescents in Azerbaijan

The wall topped with sharp razor wire is something that 17-year-old Ali is all too familiar with. His world at the Correctional Center for Juvenile Boys of the Penitentiary Service of the Ministry of Justice is surrounded by the concrete wall and barred windows.  He occasionally is able to go for a walk beyond the barriers accompanied by guards, and is bitterly reminded of how other people live their lives in freedom, whilst he is stuck following the strict regime in the detention center.

Ali will be in detention for 9 years. He deeply regrets the actions that led him to end up here in the detention centre, away from his brother and sister at the age of 14.

“I was working at a construction site, but the pay was not sufficient for my training, living, and renting an apartment. So, as I felt it was not enough, I went to a foreigner and asked for money, he refused. He then did something wrong to me and I punched him, took his money, and then ended up here,” he said.

‘Here’ is a detention centre where boys under 18-years-old are sent after committing a crime, rather than to an adult prison. Ali’s background is similar to many of the boys in the detention centre. He is an orphan and had no one to help fight his case for him.

UNICEF, alongside Azerbaijan NGO’s, in the framework of the Promoting of the Access to Justice for Children program supported by the European Union, is advocating that the detention sentences for juveniles be limited so they are not the same as adult sentences.

I should not have committed the crime, but it is my first crime, and 9 years is not right.

“UNICEF promotes international principles and standards when it comes to administration of justice for children. Children who are going through the judiciary system should be treated in a way that their best interests are protected,” said Ramil Iskandarli, who worked with UNICEF on the project.  “UNICEF promotes specialised justice system in Azerbaijan to ensure better protection of the rights of most marginalized and vulnerable children and adolescents.”

Local organizations also want the conditions inside detention centres to improve. Although the boys in the detention centre are given lessons, NGO staff believe that teaching is not of a good standard.

“For as long as the adolescents stay in a facility, they can’t get any decent education. As a result they can’t gain a profession and they are deprived of any chances to prove themselves or be successful in a society,” said Nazir Guliyev, Chairman of the Board for the NGO Alliance on Children’s Rights.

After their sentence is over, and they are out in world once more, most people stigmatize adolescents who have been in detention, and are unwilling to befriend them or hire them for work.

“Everyone alienates that person and they feel that they are useless individuals,” says Guliyev.“The statistics show that notorious criminals have been to prison as children. So it means that by detaining children, we cultivate future criminals.”

But there is an alternative to sending children to detention. Kamala Ashumova is head of the NGO Reliable Future Youth Organization that runs rehabilitation centres, where troubled teenagers can access legal services, and support from teachers and psychologists. Adolescents who have committed small crimes can be sent to here rather than to detention.

Everyone alienates that person and they feel that they are useless individuals.

“If kids are diverted to us officially by police or unofficially by parents it helps kids to not end up living a prison life. Firstly, kids are rehabilitated within families, and feel the support of family,” says Ashumova. “We investigate the root cause of the crimes committed by kids. We help the child not to be discriminated by the public, and we try and heal his trauma.”

Farid is one child who instead of going to detention was lucky enough to be sent to the rehabilitation center in the town of Gandja. He and his friend robbed a small store when they were 16-years-old.  They stole money and cigarettes and a few other things, but were caught by his friend’s mother and taken to the police station.

“I do regret it. I don’t recommend any one to be exposed to prison or detention. I wouldn’t recommend it to my worst enemy. The reason that I wasn’t in prison was that I was a minor and this was the first crime that I committed.” said Farid.

After detaining him for a day, the police registered Farid, and recommended that he go to the rehabilitation center. Due to UNICEF trainings, even police are recognizing that true rehabilitation has a better chance of happening outside of the detention centers.

When Farid started seeing a psychologist at the centre, he was able to understand that he was mixing with a group of friends who were leading him into a life of crime. At the group sessions in the rehabilitation center, he also had the opportunity to make new friends and engage in sports activities.

“The center helped me.  My conversations with the psychologist and the center gave me- how can I say- love, something that I never got from home. So, they did something that my family didn’t do,” Farid said.

Since coming to the center, he has not been involved with crime, and has plans to study engineering at university. There is a danger however that his success story may be one of the last. The rehabilitation centres are in danger of closing, and desperately need government funding to provide long-term services for the future.

“The sustainability of this project is important. Police and other bodies are starting to send these kids officially to us.   If a child does not undergo the rehabilitation process, he may be in danger of committing grave crimes,” Ashumova says.“If the programme stops, parents and kids will have no place to be referred to, the number of crimes will increase.” 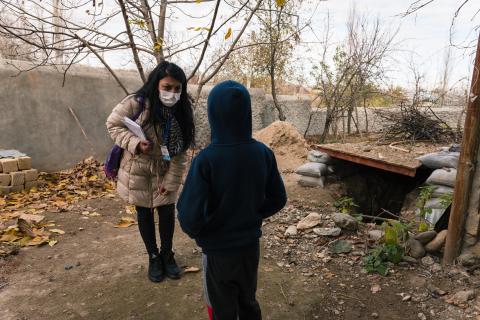 A story of endurance and support 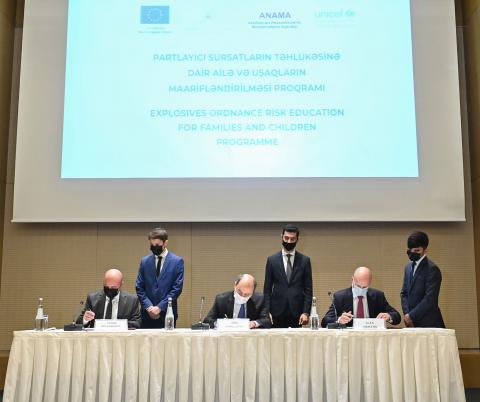 Explosive ordnance and landmines: Ministry of Education, European Union, ANAMA, and UNICEF launch a programme to protect children and families 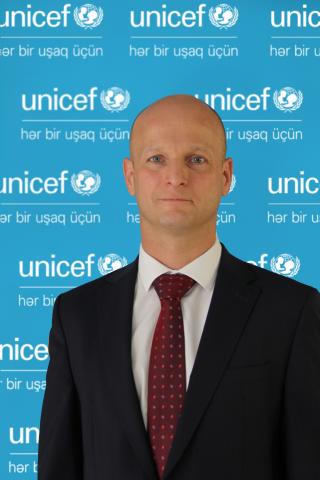 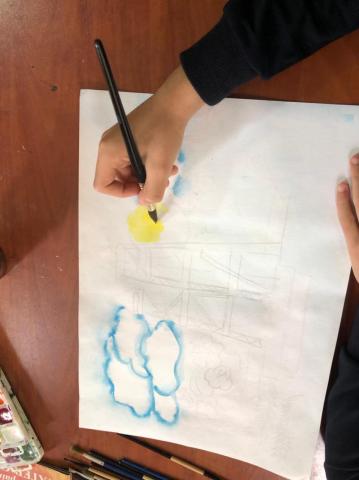 A centre that give chance to start a new life