A matter of life and death: A case for the Uganda Child Helpline

An Essential Service during COVID-19

The call came in at 8:00am to the Uganda Child Helpline.

‘Hello, Ronald has a deep cut on his head. He is still bleeding.  He is five years old.’

Since its establishment in 2014 as a mechanism for child protection, the Uganda Child Helpline (UCHL) 116 on average receives 100 calls per day, reporting different forms of violence against children- physical, sexual and emotional. It also addresses issues around online safety for children. Also known as ‘Sauti’, a Swahili word for ‘voice’, the helpline, which is run by the Ministry of Gender, Labour and Social Development with funding from UNICEF and other partners, provides counselling and refers children to district service providers for additional support. In some cases, when local structures are unable to address the cases, the helpline staff also directly follow up cases related to violence against children throughout the country.

The 2016 UHCL Annual Report notes that nearly 3,000 cases of child abuse were reported and over 1,000 callers sought counselling services through the helpline. Child neglect was the most reported form of abuse at 48 per cent followed closely by sexual and physical abuse. A 2018 national Violence against Children Survey that measured the prevalence, nature and consequences of physical, emotional and sexual violence against children in Uganda revealed that one in three girls while one in six boys, suffer sexual violence during their childhood and seven in 10 boys suffer physical violence indicating a significant need for support.

To ensure effective case management and referral of cases, the UHCL applies a multi-level stakeholder approach that engages different offices including the district Probation and Social Welfare offices, police and other justice actors, and health centres as required.

As the world struggles to contain the spread of the coronavirus (COVID-19) pandemic, many children currently at home are being exposed to increased risk of violence – including abuse, torture, physical, sexual and emotional exploitation. In the first week of April 2020 however, no calls were answered at the Sauti call centre, as the helpline closed due to restrictions imposed to curtail the spread of COVID-19 in Uganda.

Out of concern for the sustained safety of children, UNICEF led advocacy efforts with other partners at the highest level to ensure the continuation of the helpline service, highlighting the critical service the helpline offers. A Ministry of Gender April 2020 report notes that, ‘It was evident from the media and other social media platforms that cases of abuse against children were still happening.’

One of those cases was Ronald in Wakiso. When the cows started lowing at night, Ronald’s stepmother accused him of having played during the day instead of feeding them. She hit him hard on the head, resulting in a deep cut. Ronald’s uncle who made the call revealed that the local council chairman was not available as the lock down had found him in another district and the helpline was his only other option. Following the call, the helpline contacted Wakiso police who quickly intervened, took him out of his father and stepmother’s home, sought treatment for Ronald, and with the Probation and Social Welfare Officer found temporary but safe abode for him at a paternal aunt’s home.

Of the 269 cases reported in the first 14 days of the helpline reopening, child neglect, physical and sexual abuse cases constituted most of the cases and there also were two reports of murder. The helpline is providing counselling, referrals for further support, or follow up of cases with the district level Probation and Social Welfare Officers, the Police and other relevant stakeholders and service providers.

“The helpline is an essential service not only because it gives a voice to children, but also because it provides children with critical access to safety and justice.”

UNICEF’s commitment is to continue funding the operations of the Uganda Child Helpline, to ensure safety for every child, while also supporting the Government’s social welfare workforce and other child protection actors in providing child protection services. UNICEF is working with UNFPA to upgrade the helpline so it can also accept calls on Gender Based Violence (GBV) in general.

The case workers at the helpline call centre are also addressing the numerous calls requesting information about COVID-19, which the counsellors are providing. 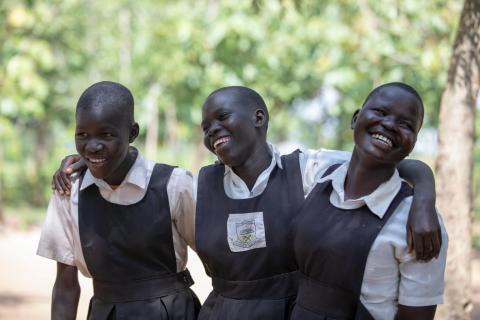 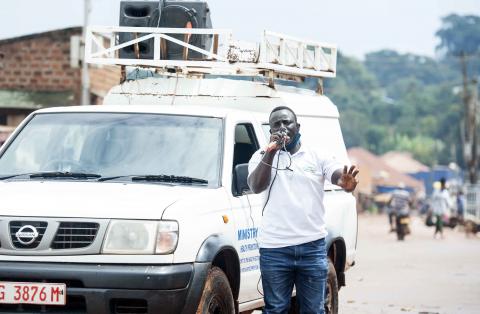 Mobile health educator takes one village at a time
Step by step, he gives the technical information, backed with actual examples
Read the story 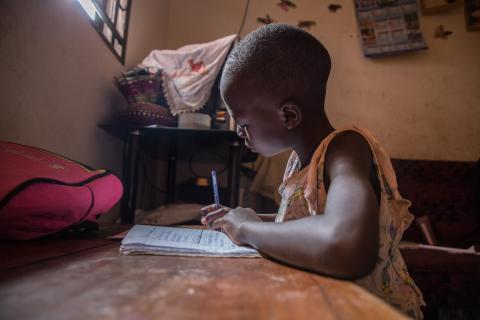 In education, now is the time to ‘build back better’
Read now 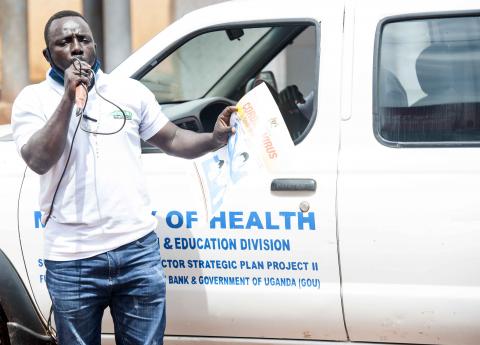