''Empowered Girls, Empowered Future'' It is not a Dream

The 4th International Day of the Girl Child Conference was organized with the theme “Empowered Girls, Empowered Future: Empowerment of Girls through Science, Arts and Sports” 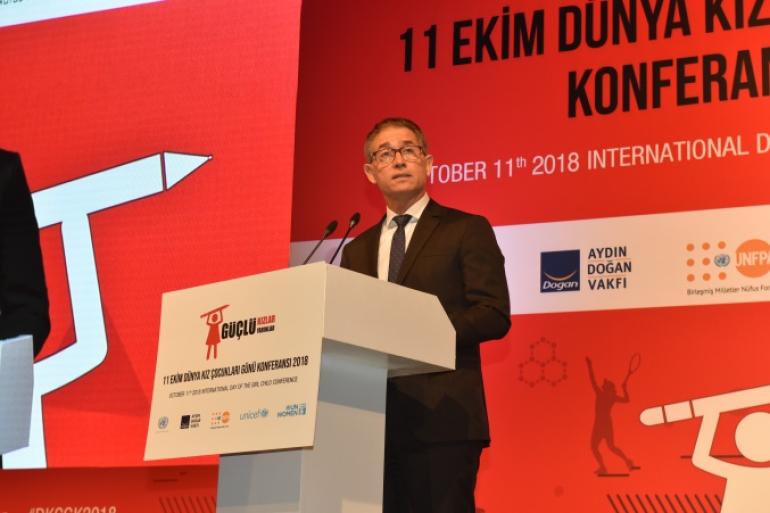 İstanbul, 11 October 2018- The 4th International Day of the Girl Child Conference, co-organized by Aydın Doğan foundation, UNICEF, UNFPA and UN Women was held on October 11th at the Hilton Convention Center. The conference focused on revealing the full potential of girls to shape the future of societies, eliminate obstacles they face and create social awareness on gender equality.  During the sessions national and international role models to girls shared their own success stories with 500 participants from public and private sectors, civil society, academia, media and children themselves. All panelists underlined the importance of combining education with science, arts and sports to contribute to girls’ empowerment and gender equality.

In her opening speech, Vice Chairperson of Aydın Doğan Foundation, Vuslat Doğan Sabancı, stated, “It is in our power to change stereotyped social norms and prejudices that prevent today’s girls from improving themselves in education, sports, arts and science and from turning into tomorrow’s powerful and influential women. In order to make “the change we need” it is of great significance that we discuss the issues concerning the realization of full and equal rights for girls and continue launching projects to attract public attention and raise due awareness to support tomorrow’s successful women. As a citizen of the world, each of us must continue to stand by girls to raise powerful women who break new grounds and contribute to their family, society and country by thinking, working and producing”.

Invest in Girls Invest in Humanity
Philippe Duamelle, UNICEF Representative to Turkey, in his opening speech declared "Data speaks for itself. Today, over 131 million school-aged girls are still out of school. Young women aged 15-29 are more than three times as likely as young men to not be in employment, education or training. One in 10 girls under the age of 20 has experienced a form of sexual violence. Taken together, these statistics show a world in which a significant part of one half of humanity is being systematically left behind, and forced to endure various forms of discrimination and inequality. But this situation is not irreversible – and if we all work together, there are many areas where we can achieve real and lasting positive change. After all, when we invest in our girls’ education and well-being, we are investing not only in their future but in the future of humanity".

Guest Speaker Zainab Salbi Gave Inspiring Messages
The guest speaker of the conference, Zainab Salbi, founder of  Women for Women International, an organization dedicated to serving and empowering some 420.000 women survivors of wars in 10 different countries by offering social and economic support, shared a personal life story to emphasize the importance of girls’ and women’s empowerment.

Ms. Salbi, recently named as one of the “100 Leading Global Thinkers” by Foreign Policy Magazine due to her valuable efforts, came to Turkey to address this conference specifically. Salbi gave important messages to the participants in her speech titled “The Change Agents for a Better World: Girls and Boys“.

In her speech, Gender Equality Programme Coordinator from United Nations Population Fund, Meltem Ağduk, indicated “A strong society can only be formed when the power of girls is unleashed. This is only possible when laws and national and international goals are in harmony; and societies, governments, national and international institutions, and individuals work together.

Sabine Freizer, UN Women Office in Turkey Deputy Director, also delivered a speech and stated, “We share a commitment to create a sustainable world able to provide progress, welfare and justice to all girls. Arts and sports are areas that promote empowerment of girls. Attending arts and sports activities may help girls build confidence, enhance vitality and learn to be a team member, a leader and a role model. Our responsibility is to help them realize their potential and support them in building both their future and the future of society.”

World-Renowned Figures Gathered in the Panel Discussions
The 4th International Day of the Girl Child Conference hosted world-renowned figures throughout the panel discussions titled “Creativity and Energy Resources: Girls in Arts and Sports”, “Our Guide to Life and Freedom: Girls’ Empowerment Through Science and Technology”, “Role Models for Children and Young People”.

The panel on science and technologycreated a platform to share opinions on what can be done for the empowerment of girls shared by Batuhan Aydagul, Director of Education Reform Initiative, Derya Ozkaya Matras, Country Director of Facebook and Assoc. Prof. Burcu Ozsoy, Researcher on Polar Regions at Istanbul Technical University.

Inspirational Art Activities Left Their Mark on the Conference
At the conference, Mardin-Mesopotamia Circus and Street Arts Group, Music for Peace and Gizem Nalbant entertained the participants with their performances.

The Book Titled ‘Ben Istersem’ (If I Want) Was Introduced
The book titled ‘Ben Istersem’ (If I Want) published by Doğan Egmont publications in cooperation with Aydın Doğan Foundation which compiles stories by famous female authors in Turkey was promoted at International Day of the Girl Child Conference. The stories for Empowered Girls and Empowered Future were written by Canan Tan, Deniz Erbulak, Feyza Hepcilingirler, Gulten Dayioglu, Ipek Ongun, Karin Karakasli, Sebnem Isiguzel and Sermin Yasar and the book was illustrated by Dilem Serbest. 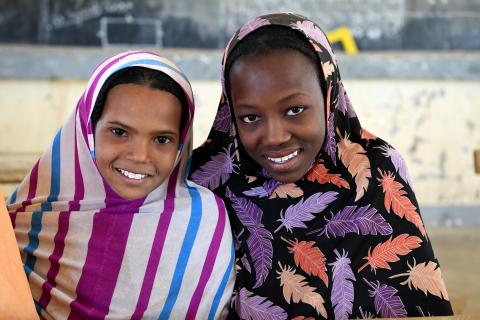 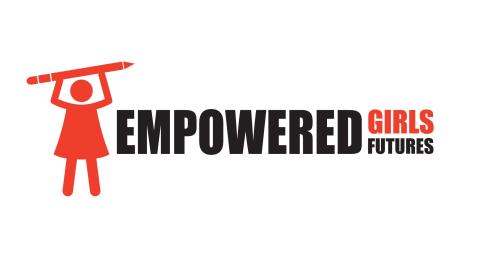 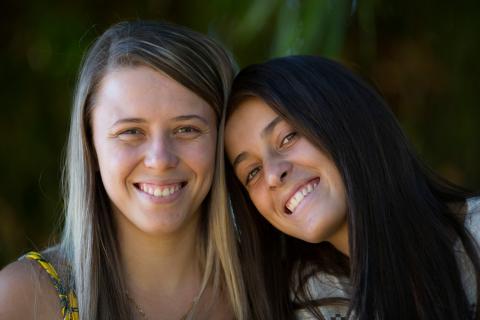 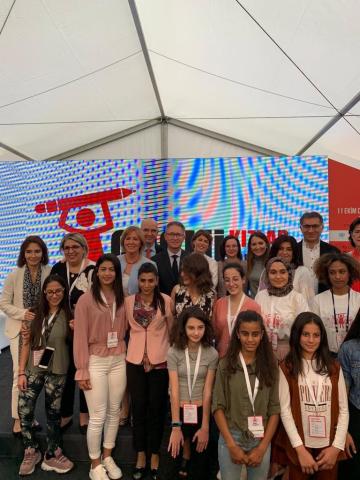