This World Immunization Week, we survey five immunization campaigns that saved lives in Sudan since 2020.

World Immunization Week (WIW) is an opportunity to remind ourselves and our loved ones that immunization is one of the most effective ways to protect children and their future. Globally, 1.5 million deaths could be prevented if all children were vaccinated.  In a young country like Sudan where 72 per cent of the population is under 24 years of age, immunization is crucial. UNICEF is a champion of immunization in Sudan and across the globe, procuring over 2.752 billion vaccine doses and reaching nearly 45 per cent of children under 5 years of age.

The Immunization Programme (IP) in Sudan includes routine immunization for children and adults, COVID-19 and other vaccines that are prioritized during outbreaks. UNICEF supports the immunization infrastructure in Sudan by strengthening the health system, providing capacity-building and procuring vaccines to ensure vaccine equity and that children and communities have equitable access to immunization, wherever they are, in cities or in conflict-compromised and remote areas.

Below are five examples of UNICEF-supported immunization campaigns in Sudan that saved the lives of children and adults in recent between 2020 and 2021 years.

In August 2020, following several COVID-19 lockdowns, 12 circulating vaccine-derived poliovirus type 2 (cVDPV2) cases were detected in Sudan and a further 46 were recorded during a polio outbreak. UNICEF worked with partners on two rounds of nationwide outbreak response campaigns in 186 localities across all 18 states in Sudan. Over 8 million children were reached with the polio vaccine. As a result, and after tremendous work, Sudan was declared polio-free in January 2022.

Sudan has recorded several yellow fever outbreaks within the last decade. Outbreak response campaigns were implemented in 2005, 2015 and again between 2014 and 2018. UNICEF supported in the mini-catch-up campaign between March and September 2021 in six states, integrating with a polio campaign to increase reach. Following persistent advocacy, the yellow fever vaccine was approved for introduction into the routine programme in 2021.

Both refugee and host communities in Gedarif and Kassala, Eastern Sudan, were reached with immunization supplies in 2021, with over 37,000 people receiving the yellow fever vaccination and over 44,000 receiving the first dose of oral cholera vaccine (OCV) in Gedarif and Kassala. More than 37,000refugees from Ethiopia received the yellow fever vaccine, while over 44,000 people received their first dose of oral cholera vaccine (OCV).  They are now safe from the high risk to outbreaks of cholera and yellow fever among their communities.

Since March 2021, UNICEF has been deliveringCOVID-19 vaccines to Sudan via the COVAX Facility and supporting in health system strengthening. across the country.

Sudan has secured more than 12.3 million doses of COVID-19 vaccines via COVAX facility.

To reach this level of success, UNICEF is continuously investing in cold chain equipment as part of its technical support to the Federal Ministry of Health (FMOH).

Measles remains a huge risk in Sudan. It is contagious and deadly. In 2021 UNICEF worked with partners on a measles outbreak response campaign reaching, 82 per cent of all children under one year old  in Sudan who received their first dose of the measles vaccine, while 64 per cent  between 18 -24 months received their second dose. From 2000 to 2018, access to measles immunization prevented an estimated 23.2 million deaths worldwide. Access to this cost-effective and safe vaccine will save many lives in Sudan.

The Immunization campaigns in Sudan are made possible thanks to our partners, World Health Organization (WHO), Gavi, Alwaleed Philanthropies, the Government of Netherlands and USAID’s Bureau for Humanitarian Assistance (BHA) 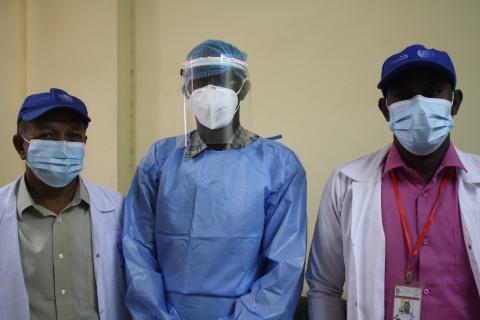 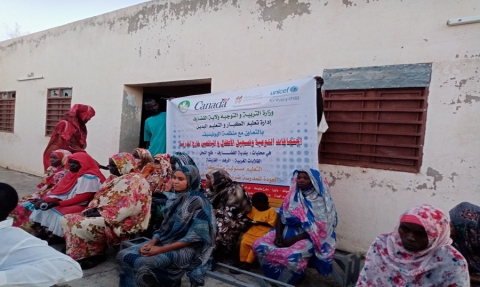 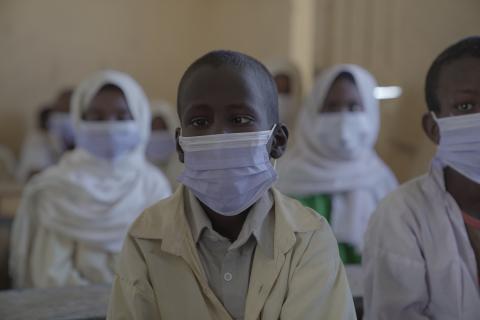 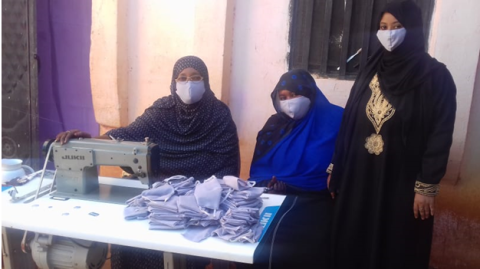 Tailoring skills to respond to the COVID-19 pandemic

Equipped with sewing machines and training, teachers in White Nile State leverage their tailoring skills to respond to COVID-19