Gaza schools equipped as shelters in preparation for future emergencies

Conditions were crowded and unsanitary and alarms raised over possible spread of disease for the simple reason that the schools were not intended as living spaces for so many.

GAZA, State of Palestine, 30 June 2017 - The Gaza Strip has seen repeated violence and conflict The last military incursion in 2014 displaced up to 500,000 people – more than one-fourth of the Gaza Strip’s population, many of whom sought shelter in schools.

At the height of the two-month-long conflict, 290,000 people had sought shelter in 113 Palestinian public schools and schools run by the United Nations Relief and Works Agency (UNRWA).

Conditions were crowded and unsanitary and alarms raised over possible spread of disease for the simple reason that the schools were not intended as living spaces for so many.

UNICEF, backed with funding from the European Civil Protection and Humanitarian Aid Operations (ECHO) Delegation in the State of Palestine, has now outfitted two public school compounds designated as emergency shelters with the proper water and sanitation facilities in case they are needed to shelter Palestinian families once again.

Toilet and shower blocks were constructed in the schools, the sanitation facilities rehabilitated, power generators installed along with solar electricity and solar heating units to provide hot water in the showers, and basic entryways built to provide access to those with disabilities.

“Having these shelters has greatly alleviated the burden posed by emergency preparedness at this very difficult time. Gaza needs more of these efforts. We are grateful to UNICEF and ECHO for their contribution,” said Engineer Hatem Ghaith, head of the central emergency committee at the Ministry of Education and Higher Education.

The UNICEF program is a pilot for a much broader effort to outfit Gaza’s schools in case of emergency. A total of 20 public schools were identified and will be outfitted by UNICEF and other organizations, in addition to 50 UNRWA schools.

In the 2014 war, families shared sleeping and eating areas in the schools, which had basic toilets and sinks that were often deteriorated. The lack of adequate shower spaces especially affected women and girls who were unable to bathe or clean themselves in private.

Moreover, the use of sinks for washing, small toilet areas, and the basic stress of housing so many people in a non-residential space caused additional damage to the schools, impeding access to education and impacting the quality of learning for Gaza’s one million children over the long term.

At least 262 schools were damaged in the conflict; three public schools were completely destroyed and at least 23 kindergartens suffered harm. Civilians, including children, were killed and injured in schools where they had taken shelter. In southern Israel, at least three hits on schools were recorded as well, causing destruction.

Following the 2014 conflict, a survey was carried out to identify non-school emergency shelter options, but in the densely crowded Gaza Strip, few alternatives were identified, and none able to provide shelter at scale to the extent that school buildings do.

The selection of the school compounds to be equipped as DES was done jointly by the Ministry of Education and Higher Education, the Ministry of Social Development and the UN Office for the Coordination of Humanitarian Affairs, taking into consideration the lessons learnt from the 2014 conflict, when the most affected municipalities were those located near the fence between the Gaza Strip and Israel. The shelters were therefore chosen among a list of preselected schools located along the central area of Gaza, further away from the fence.

The Gaza Strip has seen major armed conflicts in 2009, 2012 and 2014, each weakening infrastructure on the ground.

“The rehabilitation and upgrading of water, sanitation and hygiene (WASH) facilities is essential to prepare the schools to become shelters and better host displaced people during a crisis,” said UNICEF WASH specialist Sebastien Truffaut.

He said that humanitarian aid organizations are working with education and social services officials in Gaza to ensure that such damage is minimal and emergency preparedness is improved, while advocating for better conditions for the Gaza Strip’s two million residents. 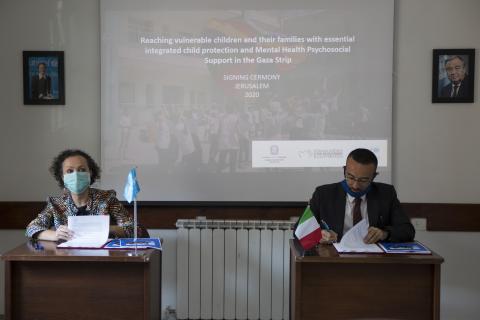