Online launch of the survey on knowledge, attitudes and practices of disciplining children at home 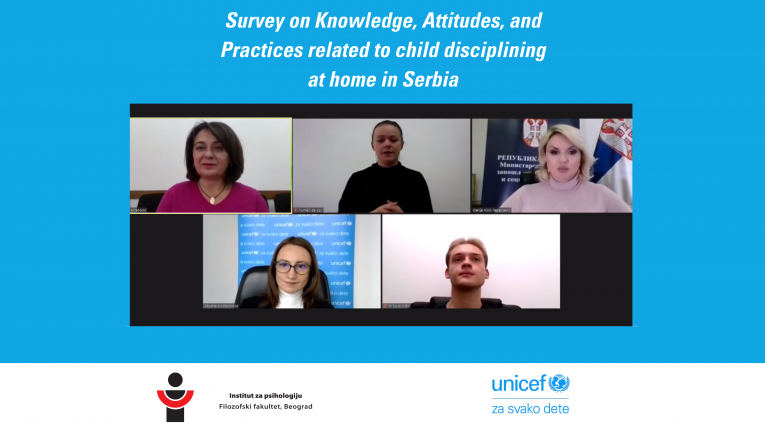 Belgrade, 16 December 2020 –  UNICEF,  together with the Ministry of Labour, Employment, Veteran and Social Affairs, today presented the findings of the Survey on Knowledge, Attitudes, and Practices related to child disciplining at home in Serbia. The Survey was conducted for UNICEF by the Institute of Psychology and the Institute for Mental Health.

The attitudes towards violent disciplinary practices were assessed on a nationally representative sample of parents of 0-18-year-old children in Serbia and a sample of professionals who provide parenting support. The Survey also paid attention to the communication channels that parents and professionals use and trust when seeking/providing new information and advice.

Parents of various backgrounds and circumstances show strikingly similar beliefs, at very similar levels of intensity, about the joys and challenges of parenting. They share a strong sense that they are good parents, as well as a desire to improve their parenting skills.

Darija Kisic Tepavcevic, Minister of  Labour, Employment, Veteran and Social Affairs, said that “within the comprehensive scope of protection of children's rights, the protection of children from all forms of violence, abuse and neglect is one of the policy priorities of the Republic of Serbia, in accordance with the adopted zero tolerance for violence’ principle.”

“In that sense, the Ministry of Labour, Employment, Veterans and Social Affairs, in accordance with the scope of its work and within its jurisdiction in the field of social protection, in cooperation with other relevant actors, is actively involved in protecting children and families from all forms of violence”,  the Minister concluded.

Parenting is an important and challenging task and parents need support with child-rearing.

“We all know that parents love their children and want to see them grow up healthy and happy.  But many of them, both fathers and mothers, need support to develop positive parenting skills to avoid using violence in child-rearing. Achieving ‘zero tolerance to violence’ is a long journey which requires commitment, patience and consistency”, said Deyana Kostadinova, UNICEF Representative in Serbia.

Building the system to change behaviours, attitudes and practices towards ensuring that every child lives in a non-violent and supportive environment requires both the availability of quality services and parenting programmes, as well as consensus around consistent public awareness-raising.

It is also important to harness the support and involvement of the  government, community, parent associations, NGOs, and businesses. And to always  be open to hear the views of children and adolescents as this is an issue that truly affects them.

Reflecting on the views of young people on violent disciplining of children obtained through the U-Report platform, Mihailo Mitic, member of the UNICEF Youth Board, said: “Adolescents and young people must participate in positive parenting programmes and campaigns. We will be parents someday too, so it is important that we learn about parenting and how to be good parents. Nobody was born with all the knowledge. Parenting needs to be learned, just as we learn other things”, said Mihailo Mitic.

Nonviolent child home disciplining should be part of a wider response within the framework of child protection from violence and abuse, including explicit prohibition of all corporal punishment in all settings, mandatory compliance with the general protocol on the protection of children from abuse and violence and the relevant special protocols aimed at protecting children from abuse and violence, the Survey concluded.

•             Almost half of the interviewed parents (47%) beat their child for the first time when the child was between two and three years old.

•             More than two-thirds of parents were psychologically aggressive toward their child at least once in the previous year.

•             Two most frequent reasons for violent disciplining were the child’s disobedience (22%) and finding herself/himself in a dangerous situation (23%).

•             Most professionals expressed a negative attitude related to corporal punishment, and medium satisfaction with their preparedness to deal with the issue.

•             When professionals were asked about their own beliefs regarding parenting, and the source of information they found the most trustworthy, 17.2% professionals trusted their own parents’ advice most.

Survey on Knowledge, Attitudes, and Practices related to child disciplining at home in Serbia is available here. 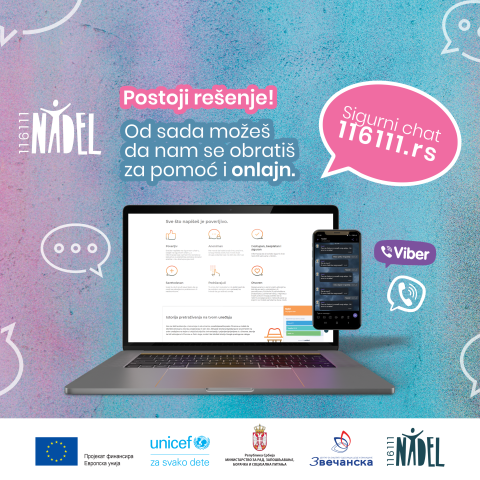