Child marriage among the Roma population in Serbia

This qualitative research confirmed the widespread existence of child marriage practices in Roma communities. At the same time, it was found that the modalities, causes, and presence of this practice varied considerably from the communities in which the research was conducted.

This indicates the complexity of the factors that influence the existence and character of child marriages.

The decision-making process related to child marriages in the Roma community is primarily influenced by the following factors:

The patriarchal model of functioning of the community where the position of women is subordinate and their gender roles predominantly imply the role of wife, mother and housewife.

“I asked my husband later would he let me work? No, he says: our women don’t work. Our men work for women and children. You won’t work with me. Maybe later, but we’ll see. If I have trust, let some years go by, if we have children, let them grow up. (You didn’t work later?) No, I didn’t. I practised with my husband’s sister’s children. With the neighbours, but didn’t work like an employee (the respondent completed a hairdressing course).

The powerful influence of social and cultural norms within which the cult of virginity determines the perception of marriage.

“But you know what, we have this, it’s not even a custom, it’s like a law that exists, and that we the Roma maintain. It’s not just my generation, ever since people know about us Roma (my mother, my aunt, my husband’s sister, everyone I know)... simply that’s the law. When a girl gets married, her husband must be her first, meaning that she must be a virgin. If it happens that she is not a virgin, then the entire Gornja Čaršija will be buzzing, like, that will be a disaster."

Consequently, entry into marital union as a result of the first sexual relationship, without knowing what it implies, which in particular refers to the complete absence of knowledge about sexual life, especially among girls.

“My opinion is that the children as young as that don’t even know how to think about marriage the right way. I got married. I will have a child and everyone will help you. That’s not it. They are not mature enough for marriage. Even at 18 it’s too early. They’re still restless. Only at 20, 21 they start becoming mature... Marriage is not just, pardon me child, lie down and make love. What will we eat tomorrow? Why would someone else take care of them? With poor people first comes the child. Poor man’s capital is a child. First, you get that right away. And that’s why I’m against it, ‘cuz they’re not aware of what that marriage brings. Marriage brings both good and bad ...”

Lack of intergenerational dialogue when it comes to marriage and sexual life, especially between mothers and daughters. As a consequence of the taboo of sexuality, there is a high risk of endangering the reproductive health of young girls, especially in cases of early childbirth.

“(Did you talk to your mom about marriage at all while you were a girl?) No, of course not. I never talked to her while I was a girl, of course not. Actually, I didn’t talk to anyone about it. I didn’t even know what this marriage means, but I wanted to try. To see what it is and what it’s like.”

Pressure from the community regarding the irreversibility of entry into marriage, where divorce is largely seen as damaging to the family’s reputation and honour.

“When I said I’m gonna run away, my dad and mom and everyone jumped at me. And then when I came even worse, like a nun... Yeah, you get back and there’s no more friends, you’re just staying home with your mother. Then it's even... (And how long did that last?) Well for a good part of two-three years. Later I went to my sister's and there and shame and everything (And were you ashamed or were you made to be ashamed?) A lot, I would have been ashamed. It’s really a disgrace.”

The economic factor, which implies the perception of the child being better off when she moves to the husband’s family. Selling the bride in this context is not a prevailing model, but an assessment of the parent or the child herself that she will have a better life in the new community, in the absence of alternative life choices, where marriage is the only possible and desirable starting point of the life cycle.

“Families where there is no economic empowerment ... the children and family there are totally capitulated... there's fights, there's disputes because hunger does not tolerate anything... poverty does not tolerate anything... So these children marry early. Because they’re moving away from this family and think they will enter a better family. But the same thing also waits for them there.“

Perception of education as a generally desirable, but essentially unnecessary, resource. In this regard, the lack of motivation for further education, primarily among girls, makes marriage seem desirable because there is no alternative model. The gender role of a woman as a housewife, mother and wife is imposed on girls from early childhood, denying them the idea of different life choices.

Poverty as a consequence of marginalization by the majority environment, but also of the closed circle of social norms and the lack of education within the communities themselves.

“They (the older brothers who took care of the respondent, because she lost her parents early) were afraid, they did not have the time to take care of me because they worked you know. They didn’t let me, he says, sister you can’t go to school because there ain’t no one to take care to you. I say, I will stay here brothers, I say I won’t go to school, but I ain’t gonna know nothing. Today I can’t write, I don’t know anything... I say for my daughters. School must, must... children must learn the school, and not walk around. I’m a mother and I said I’m gonna send you to school, I’ll bring it for you and I tell him I’m bringing. Not to be a fool like me, I don’t know in school, I can’t read, I don’t know anything."

The examples of good practice of integrated Roma show the possibility of having an alternative to child marriage in terms of understanding a wider range of life options. However, the factors of discrimination from the wider social environment, as well as the difficult economic situation in the entire country, point to the danger of the reverse practice where children from integrated families marry as the result of the aforementioned factors, which can also explain the increase in the rate of child marriages in the past decade.

Limitations in the examples of good practice are related primarily to their marginal position as members of the Roma minority, which is evident at levels ranging from education to everyday life. In this regard, the phenomenon of the ‘glass ceiling’ is particularly emphasized, where, due to their ethnicity, Roma have a subordinate position both in the education system and in the labour market. Such a position poses a great challenge in combination with the potential pressure from traditional norms and customs present in Roma communities, where young Roma, faced with obstacles encountered in the majority environment, often choose to follow their community models.

"They (the policemen from Bela Palanka) didn’t even want to properly come out... the policemen didn’t even want to talk to us, but they said, if you want to talk, come to the police administration, that’s right there and like we can sit down and talk. We have absolutely no need to like come out to the field and come to your house... that’s normal for you, you get married today, tomorrow you fight, the day after tomorrow you celebrate, get a divorce or whatever, and that’s it.”

The recommendations that follow indicate the different levels that need to be addressed in order to effectively approach combating the practice of child marriage in Roma communities: 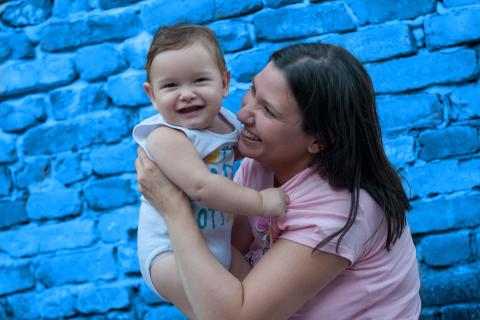 There are widening equity gaps between national averages and the most marginalized children..

UNICEF is the global leader promoting and protecting children’s rights in 190 countries, including Serbia