It is just a few hours before sundown in Tambul in the Western Highlands province of Papua New Guinea.

It is just a few hours before sundown in Tambul in the Western Highlands province of Papua New Guinea. Women gather on a grassy field, some of them carrying their infants in a traditional string bag that is commonly used in the country.

A volunteer is explaining the workings of an innovation known locally as the ‘Bebi Kol Kilok‘, or Baby Cold Clock – a hyporthermia alert device in the form of a wrist band that alerts parents to a fall in the newborn’s body temperature. It was distributed by volunteers in Tambul.

Low tech innovations and simple practices are at the core of a UNICEF-supported ‘Saving Lives, Spreading Smiles’ (SLSS) of which the ‘Bebi Kol Kilok’ is a central part. More than 150,000 babies born over the next three years and their mothers will benefit from the project. It focuses on neonatal hyperthermia (low body temperature) in newborns - a common factor that contributes to death among newborns in Papua New Guinea.

Jacqueline, 25, has brought her one-month old infant, Jazeline, for the outdoor counselling session. Her baby has been given the Bebi Kol Kilok a month ago, as she was born prematurely. The life-saving device alerts parents and caregivers by producing a beeping sound and flashing an orange light. On hearing the alert, parents or caregivers provide skin to skin contact, known also as Kangaroo Mother Care (KMC) to warm the baby.

UNICEF provided training for community volunteers in 12 villages on how to educate mothers on the use of the device and how to administer KMC, said Acwe Mambu the SLSS Field Officer, who has a UNICEF-provided uniform to be recognized in the community. She added that hypothermia is an issue in the highlands as nighttime temperatures plummet low enough to create frost on the ground. The low temperatures are often linked to the climate change, in recent years communities are experiencing more frost and are struggling to keep their children and crops from freezing.

Jacqueline said that in the past month the device has successfully warned her on several occasions of a fall in her baby’s body temperature. She volunteered to demonstrate the device for the other women.

“I think I would have lost my baby without the Bebi Kol Kilok,” Jacqueline says.

She added that the device went off a few times when she was out but that the father and grandfather were present, took note of the alert, and warmed the baby.

Jacqueline says she walked for about one hour to attend today's session. Her husband is unemployed, so the family makes a living from selling vegetables. The battery life of the Bebi Kol Kilok is one month, designed to protect the baby from hypothermia in the critical first month of the baby’s life and is removed after a month. Male villagers joined to hear more about the device.

They listened carefully to the volunteers and asked questions at the end. Culturally, men in Papua New Guinea are not involved in child care, but the device attracts attention and makes them curious. Since the introduction of the Bebi Kol Kilok last year, according to health professionals, this simple innovation has not only helped save lives but has also changed behaviors of some of the fathers. Some have said that they are now more engaged with their babies, they better understand their needs and are able to meet some of them - such as keeping the infant warm.

Newborns, particularly low birth weight babies, are prone to hypothermia, which slows down the functions of vital organs such as the brain, heart and kidney and eventually shuts down if the temperature remains low for extended periods of time.

Dr. Magdalynn Kaupa, at Mt. Hagen Hospital, has seen many low birthweight babies over the course of her career. As the chief paediatrician for the region she has a good picture of the overall health situation for mothers and babies and sees a lot of patients daily.

Dr. Kaupa identified several reasons behind the low birth weight of many babies: skipping visits to the clinic; poor nutrition; malaria; and social issues, such as mothers not being taken care of properly during pregnancy. In addition, some mothers opt to give birth outside of a clinic or hospital. “You can have a mother (just outside of the hospital) selling betel nut and she’s not coming to the clinic. The word is not getting to them, or they might have migrated from elsewhere to work. So coming to the clinic is not important to them ... they are fighting for survival. Coming to the clinic means missing a day of work.”

“The Bebi Kol Kilok has really helped,” Dr. Kaupa said, adding that it has even encouraged fathers to become more involved in their children’s well-being. “It’s all about doing the right things when they find out something is wrong.”

Wandea Opmi, one of the volunteers, said many of the women in the area deliver babies with a low birth weight, making them even more susceptible to cold. Wandea said the volunteers - who receive four weeks of training - gather mothers from their respective villages and bring them together for the sessions. A major part of the messaging is to encourage expecting mothers to deliver in a clinic, provide information about prenatal and antenatal care, and that they should also seek other simple information on nutrition, hygiene and sanitation.

A change in mindset

In the rural areas of Papua New Guinea, parents - many of whom are subsistence farmers - typically spend significant time outdoors and away from their newborns due to the heavy workload in the fields.

In the past, Dr. Kaupa said, babies - even those who are pre-term or underweight - would be left alone with relatives. But, with the Bebi Kol Kilok programme, which was introduced in October 2018, “the spin-off is the parents stay with the baby until the baby is very well. So, hospital admission rates have really dropped.”

Papua New Guinea has an alarmingly high rate of newborn deaths, with about 6000 babies dying every year before they reach four weeks of age. This accounts for about 17 newborns a day, a rate that has not improved in the last 20 years and is also the highest in the region. Results of the one-year pilot showed a more than 10 percent decrease in some areas in hypothermia cases.

Easing the strain on the health system

“The Bebi Kol Kilok is very helpful, especially in the cold climate of the Highlands,” said Dr. Rose Hosea, the paediatric medical officer at Mendi General Hospital. “The moms know how to monitor their baby’s temperature so it also shortens hospital stays.”

Building on the success of the Bebi Kol Kilok, UNICEF is now introducing yet another innovation, this time to help and save the mother’s life. A Non-Pneumatic Anti-Shock Garment (NASG) will be used in the rural and remote locations for the mothers, who have just delivered at home and are unable to reach a health facility. The Garment, designed to stabilize a woman experiencing bleeding after delivery helps compress the blood circulation in the legs and uteruses, redirecting the blood flow to other vital organs – heart, lungs and brain, and giving mothers an additional eight hours to be transported to the nearest health facility. At the hospital, staff have already been trained in the prevention and management of bleeding after delivery. 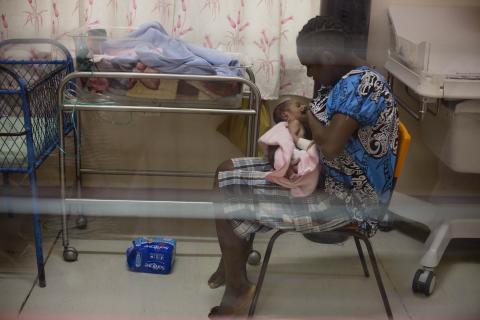 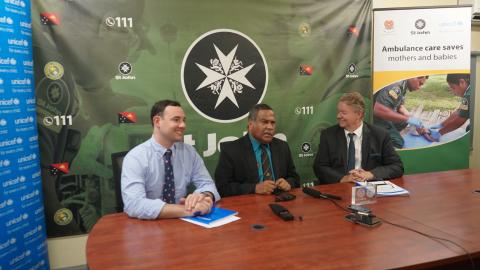 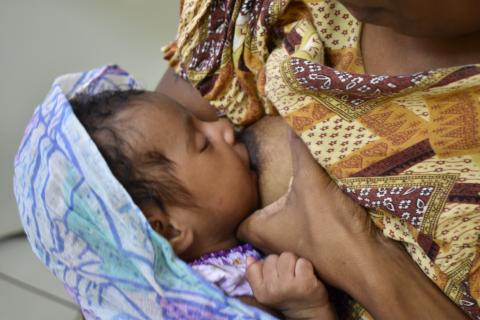