Citizens of Montenegro generally evaluate road traffic safety in their country with a medium grade. 58% say that they are personally worried because of road traffic safety, and more than 90% say that they feel jeopardized in road traffic at least sometimes. Majority of citizens think that participants in traffic themselves are responsible for road traffic safety, but that the state has to be active as well: stricter laws are necessary, as well as better control. One of the most striking findings is the discrepancy between the number of respondents who report violation of regulations and far smaller number of those who claim to have been sanctioned for that. Only one percentage of citizens is sanctioned for violating regulations about driving children, in spite of widespread mistaken beliefs and practice. Only 6% of drivers are sanctioned for using their mobile phone while driving, opposite to 76% of those who admit having used their phone during driving. While 42% of drivers admit that it happens to them to drink and drive, only 8% were sanctioned for that. 14% of citizens report to have been sanctioned for not fastening safety belt, and 12% for overtaking. In general, citizens of Montenegro know the basic traffic regulations and facts about traffic, although their knowledge may be characterized as general and superficial. Citizens are able to list many rules (for example when overtaking is forbidden), as well as to recognize correct actions (for example if a child should sit in the front or the rear seat). However, only between 10 and 30 % of drivers know the correct legally stipulated limitation of speed on various roads. Additionally, only between 20 and 40 % of citizens are informed about age of children that specific rules refer to. Citizens mainly have positive attitude towards adhering to traffic laws and regulations. Even 92% of citizens think that drinking and driving is dangerous. 74% think that mobile phone shouldn’t be used during driving, and more than two thirds of citizens think that safety belt protects from injuries. 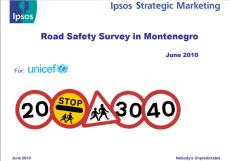