The Survey was conducted in 25 primary schools on the sample of 349 pupils of seventh, eighth and ninth grade of reformed education system. The gender structure: 46% of boys and 54% girls. In city schools 59% of boy/girl pupils were interviewed, while in schools outside city 41%. In 21 secondary schools, 317 girl/boy pupils of first, second and third grade were interviewed. Self-assessed level of awareness of global warming was at high level. Pupils in primary schools (54%) and in secondary schools (50%) said they were familiar with the term global warming. Pupils defined global warming as “increase of the temperature on Earth”. 33% of children in primary and 31% in secondary schools were unable to define/explain this notion. School and television were the main source of information, which contribute to the increase of boy/girl pupils‟ awareness of global warming. This topic was covered in primary and secondary schools within regular teaching activities. Pupils were partially aware of the term “greenhouse effect”. They heard of this term, but they did not know what it was. Those who knew what this term implied most often said it was “the sunlight which penetrates to the Earth, but under the impact of harmful gases it stays there, while only one part goes back to space”. Carbon dioxide was recognized as gas with highest impact on global warming. According to respondents, activities/factors which contribute the most to global warming were industrial plants and cars/traffic. As main consequences of global warming they mentioned melting of glaciers and bad weather/weather condition changes. Pupils knew that global warming negatively impacts on people’s health, flora and fauna. The negative influence on the economy has not been recognized. Boy/girl pupils had positive attitude towards environmental protection, which they assessed as very important. Children, 42% in primary and 44% in secondary schools, participated in some kind of action/event aimed at preservation and protection of the environment. Most often, this action included cleaning and arranging of schools yards, which was organized by teachers and school. Pupils were able to recognize activities and behaviours which had positive or negative effect on the environment. According to them, negative impact had fossil fuel-powered cars and use of deodorants. Positive impact had afforestation, waste recycling and playing sports. Boy/girl pupils applied some of measures aimed at environmental protection in their home/school. High level of readiness among respondents to point to people around them (friends/family) how they can contribute to the reduction of harmful gas emissions is evident. Interviewed boy/girl pupils said that the behave on environmentally-friendly manner in everyday life. However, by everyday activities it is possible to contribute to reduction of harmful gas emmission causing the global warming. Children in primary and secondary schools show readiness to undertake activities that will contribute to environment protection and/or reduction of harmful gas emissions in the future period. Boy/girl pupils recognized global warming as a very serious problem for the world and the Europe. For Montenegro and region it is a serious problem too. Global warming is an interesting topic to learn and talk about. Majority of interviewed pupils in primary schools (67%) has subject that covers global warming, while this percentage in secondary schools is considerably lower (31%). Pupils showed a significant level of interest in getting more information on causes and effects of global warming. The most suitable way of acquiring new knowledge and information is through subject in school, internet and television. 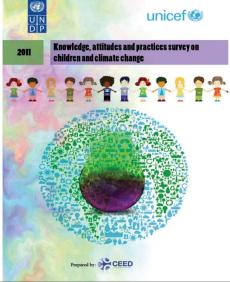