UNICEF and the Football Federation of the Kyrgyz Republic devoted the match between Kyrgyzstan and Turkmenistan to the International Day of the Girl Child celebrated today all over the world. 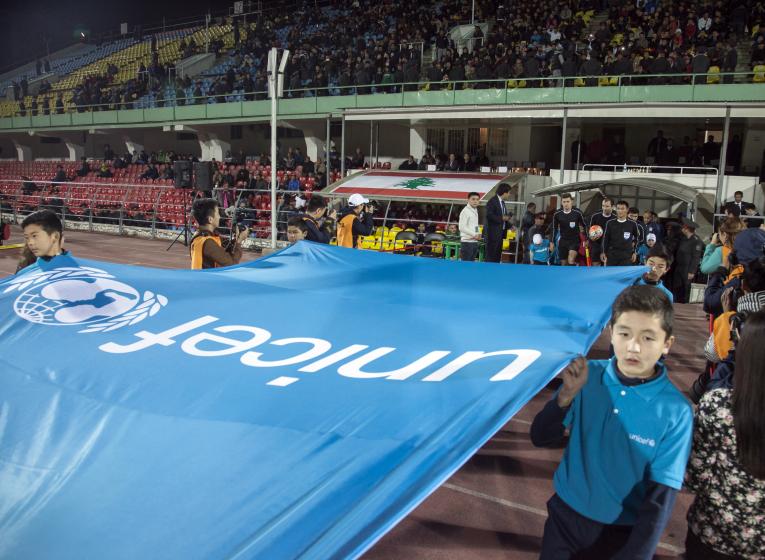 BISHKEK – A friendly match between the national football teams of Kyrgyzstan and Turkmenistan took place today at the ‘Spartak’ stadium in the city of Bishkek. UNICEF and the Football Federation of the Kyrgyz Republic devoted it to the International Day of the Girl Child celebrated today all over the world.

There are over 1.1 billion girls around the world. They face many challenges, including early marriage and early pregnancy.

Kyrgyzstan is on the second place among CIS countries on childbirth at the age of 15-19 years.

According to UNICEF’s study conducted in 2014, one in ten women aged 15-49 married before reaching the age of adulthood.

As a result of early marriage and early motherhood girls put at risk their reproductive health, cannot complete their education, become victims of violence, which not only negatively impacts the lives of  women themselves, but their children too. This problem causes the highest maternal mortality rate in Kyrgyzstan among the countries in Eastern Europe and Central Asia. Moreover, women with low levels of education are three times less aware of the danger signs of childhood diseases, which is one of the reasons for seeking too late medical assistance, and child mortality.

Another problem is household work. Girls spend 160 million more hours than boys doing household chores everyday, according to the UNICEF report. It provides statistics on how much time girls spend for cooking, cleaning, taking care of younger or older family members. On average, around the world girls aged 5 to 9 years are forced into domestic work 30 per cent more time than boys of the same age.

Uneven distribution of household duties strengthen stereotype that women's primary role is to serve the home and family. This leads to greater economic dependence of girls and women and the restriction of their rights.

In Kyrgyzstan, Dedicating the football match to the Day of the Girl Child, UNICEF and the Football Federation of Kyrgyzstan draw the public attention to the needs of girls and call to invest in girls – their health, education and safety – allowing them to build better lives and to create a more peaceful and prosperous Kyrgyzstan. The friendly match Kyrgyzstan - Turkmenistan will be the third in a series of games devoted to children.