For International Women's Day, we are celebrating the battle of women in diversity

It’s tough being the head of a single-parent family. Especially when you’ve got seven children at home. But Vanessa Fabiola Effountame has transformed this army into seven miracles since her divorce from their father. Today, she’s the proud mother of two daughters (Nolwenn, 17, and Kyria, 5) and five boys (David-Jeremie, 14, Noe-Lucas, 13, Joshua, 11, Nathan, 10, and Isaac, 7) who keep her busy all day long.

“It’s tough at times, but I hang in there. You have to be both a father and a mother at the same time. You need to know exactly when you have to be the father and when to be the mother. It’s hard to describe this kind of daily challenge, you just live it,” she explains, “but what matters at the end of the day is that they all do well.”

Vanessa Fabiola has always loved children. At the age of 15, she was already taking care of her little sister. She was the one who registered her for school. At 22, she became a mother herself and now looks back in pride at the end of each day. “When the house is quiet and I watch them all sleeping, like little angels ... then I just think to myself, they’re my little miracles,” she says. “I can only thank God for having blessed me and chosen me to become the mother of these wonderful little imps. That’s when I feel proud of myself and, above all, of the journey we’ve been on together. It’s not been easy by any means! It’s been a high price to pay, but not unbearable. The main thing is to find a routine and to know the direction in which you want to point your children. They didn’t ask to be born, but they’re here. So it’s our duty to watch over them, take care of them, educate them and give them values. Show them the path they should follow so that they never turn away. Support them in each step they’ll take in life. Teach them which boundaries to break or respect,” adds Vanessa.

Now 39, she tries to spend a lot of time with her children. From time to time, she tries out fun craft activities with them, which they really love. She watches them, listens to them and spots their talents, all the while focusing on communication.

“I’m a very strict mother. I keep an eye on everything! But I also communicate a lot with my children. I don’t allow any misbehaviour. I correct them immediately. I often talk to them about the problems their generation faces. I don’t hide anything from them because I’m someone who believes that if they don’t learn about certain things from me, life might teach them in a much harsher way. I also teach my children to fear God and His word. It’s the very basis for the way in which I raise my children. It’s the foundation upon which my family life is built. Teaching children to say ‘please’, ‘hello’ and ‘thank you’ isn’t enough. You also have to teach them human values. It’s not easy trying to do everything at the same time. But as long as we find our strength in God and love our children, we can forget stereotypes,” concludes this strong, proud mother.

Virginie and Maylis—the mother-daughter team that is passionate about digital technology!

Africa’s future depends on its investment in the next generation. This is the motto that motivates this young mother-daughter duo. Both women are passionate about digital technologies and Virginie Mounanga has used her wealth of experience to turn Maylis Kouakoua Akele (13) into a prodigy and help her develop a cybersecurity app for children. This passion for all things digital is in Maylis’ blood.

“I started to get fascinated by digital technologies when I was still very young. When I was bored, I’d learn how to use computers and tablets. I created this application as a way of raising young people’s awareness about the dangers on the Internet. My game is a quiz and when you get the answers to a few questions right, you collect points in a digital wallet. Once you reach a certain number of points, you win prizes. The questions cover several topics, such as health, hygiene, online bullying, as well as lot of other things too. For example, in the game, you might meet adults with bad intentions, people who might ask children to get the pin number for their parents’ bank card so they can use it. I also want the app to get young girls interested in digital technologies,” explains the young teenager who also enjoys dancing, reading autobiographies and spending time on her phone.

Maylis is in ninth grade and preparing for her exams, but she’s got ambitions. She is one of 400 finalists from across Africa in the 2022 Junior Margaret Award, a prestigious prize for digital technologies supported by Emmanuel Macron. Her parents are extremely proud of her.

“Maylis has come through our Junior Champion factory. We’re supporting her as parents,” explains Virginie Mounanga who heads up a company in the digital sector. Her company also has a digital club that teaches young people how to code and develop digital technologies and, in just two years, she has trained and raised the awareness of more than 700 young people.

“A woman’s key to success depends on her ability to combine her working life with her personal life. That’s our greatest challenge. I’m also lucky to have a husband who supports me. We live in a society where it’s not easy for women like me in the tech industry to build a career, especially since women aren’t yet fully recognised as leaders in the industry.  We need to lead the way and break down gender stereotypes in the tech industry. I’ve noticed that there is a serious lack of training in the sector for young people,” adds this mother of two who has everything she needs to succeed. Virginie found her inspiration in her own mother, the first speech language pathologist in Gabon who built a rehab centre for children with disabilities. She also runs a digital competition—now in its third year—that aims to raise awareness among children and teenagers. And last but not least, Virginie also coordinates the Gender and Disability Unit in Gabon which has an inclusive program that integrates children with disabilities.

A voice, a star. Renée Ruth Grâce Nguema Iwenguessono has found her place as a radio host whose voice keeps the people of Gabon company every morning on Urban FM 104.5. At 30, she’s passionate about her work and has a promising future in the media in Gabon or elsewhere in the world.

The granddaughter of retired Gabonese journalist Justine Nganga, Renée Ruth has always been fascinated by the media. She still remembers the day during the school holidays one year when she was invited onto a programme for new high-school graduates. Something clicked and it was the start of her adventure with Urban FM and her journey towards becoming a radio host and voiceover actor today.

“I feel really relaxed on air because, apart from a few shows that are filmed, no one sees you, they just listen, so you’ve got the chance to create a connection with your listeners using your voice, energy and style of presentation,” explains Renée Ruth.

She believes that a woman can live from her passion by focusing the things she likes and, above all, by not letting herself be pigeonholed into a specific field. Through her work and persistence, she’s been able to make those around her—and her family in particular—understand that communications is the field in which she wants to excel.

She declares loud and clear that a woman’s place is where she can put her skills and abilities to the best use possible. Women must participate in a country’s politics, culture and economy and in society in general. Women have the right to work and, above all, be paid fairly for the work they do and not less because people think their work does not deserve as much as a man’s work.

“I believe that women must be heard and valued for the work they do in society. A society can only develop when its people feel protected, heard and free, that’s what stimulates creativity which benefits everyone. Women shouldn’t be improving society only to be deprived of their own rights. Women, let’s have the courage to say NO when our lives are at risk, when we’re attacked physically, sexually, psychologically or economically. In Gabon, we have Law No. 006/2021 of 6 September on the elimination of violence against women, so let’s not hesitate to use it when necessary,” adds this passionate advocate.

Renée Ruth is very open minded. She’s ambitious and hopes to go even further. “I don’t set myself any limits. Today, I’m at Urban FM. Tomorrow, I could, indeed I must, represent my country further afield elsewhere in Africa or Europe, I want to feel free go even further, whether that be on the radio or in my voiceover work. And who knows, maybe one day I’ll have my own media company and train others who are passionate about communication too,” she adds.

On International Women’s Day, Renée Ruth will join other media outlets to talk about women’s rights. “You need to know how divide your time, because in addition to being a communicator, I’ve got another side too, Renée Grace the daughter and sister to her family, even if both sides are intertwined,” concludes one of the most-well-known voices of Gabon radio. 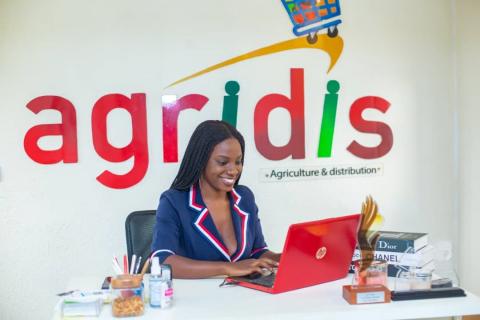 On International Day of the girl, meet Tamarah, digital champion from Gabon investing it in agriculture