Parents are the most important educators, as well as teachers in schools. We all need to act towards the same goal – to educate children and talk about healthy food, and to use all available capacities to make children to really eat healthy food, says Enisa Čučilović, one of the members of the Center for Healthy Aging in the Sarajevo municipality Centar, who participated in a workshop on healthy nutrition with primary school students.

Intergenerational workshops, attended by about 120 first-grade students of the Primary School “Isak Samokovlija” and the First Primary School Ilidža, were held on 4th and 5th of December in Centers for Healthy Aging in the municipalities of Centar and Novo Sarajevo. This educational gathering of children and elderly was organized within the framework of UNICEF’s Project “Nutrition Friendly Schools”, which has been conducted in four primary schools in Sarajevo and Banja Luka. Besides intergenerational, workshops with children and parents were held, with the common goal of raising awareness among children and their parents about the importance of healthy nutrition for the balanced growth and development of children.

Under the slogan “Eat Well, Grow Well,” the children and the members of the Center for Healthy Aging gathered and talked. Through games and entertainment, adults have talked about their childhood, what they ate, and why it is important to eat healthily. The workshops made many of the participants to smile, but also nostalgic memories of “old days” came out. Neither children nor elderly covered the emotions – they all say that the programme has passed in a great atmosphere.

At the intergenerational workshops, there were nutritionists and members of the Association of Chefs of Bosnia and Herzegovina, who prepared healthy meals with participants, explaining how important it is to eat healthily and why it is important to eat fruit, vegetables, dairy products, cereals… The students visited food stalls, and around each table, there were several elderly people, who shared their experiences with the children about the importance of a healthy lifestyle, and together they prepared healthy sandwiches.

Participants agreed that children learn more easily if they are involved in preparing meals and if someone explains to them in a simple way what kind of food is healthy. We saw that they were right at the workshop. On the question: “What are the healthy foods?”, the first-grade student Kan Bojčanović immediately told us: “corn, fish, onion, watermelon, and salad,” and his peer Matea Samardžić added: “In order to be healthy we should eat apple, tangerine, banana, and orange.” Both of them say that the workshop was “super” and that they learned to make healthy sandwiches. Their friend from school Taira Ljuca carefully listened to nutritionists and chefs, and she shared her knowledge with us: “To be healthy we should eat fruit, vegetables, dairy products, healthy food, cereals.”

Members of the Center for Healthy Aging did not hide their satisfaction with hanging out with the youngest. They say that in their time there were no foods and products that children today have. Enisa Čičilović believes that today’s diet is much different from the time when she was a child. She talked with the children about the diet, explained to them what they used to eat when they went to school, talked about healthy, homemade bread, cooked eggs, jam, cheese, sour cream, and the children listened carefully and talked about what they eat at home and how parents and teachers educate them to eat healthily.

“Nowadays children often eat snacks and drink soda, which was not common in our time. I am very happy and proud because I participated in the realization of the project “Nutrition Friendly Schools”. I spoke with children about how healthily we used to eat. I worked in a kindergarten for 40 years, and I gave them an example of how boys ate chips, flips and drank cola in large amounts and one day they felt a terrible abdominal pain. They were so sweet and listened to me carefully. One boy said that his mom says he should eat healthily and that it’s all for his own good,” says Ms Enisa.

Sabaha Trlo, who lives in the Center for Healthy Aging Novo Sarajevo, says she is very pleasantly surprised that there is a program “Nutrition Friendly Schools” and that children are a part of the population for which it is most important to be healthy.

“What you learn when you are little stays with you for the whole life. The most important thing is that to children of this age, we adults – parents, teachers, grandmothers – show how to eat healthy in a way that children can understand. When they try healthy food, they will see that it is better and healthier, but also tastier than some things that they eat constantly, such as a sandwich with mayonnaise or pie … Children can feel that healthy things are better for them,” says Ms Sabaha.

She says that at the time she attended school, there was no abundance we have today, but that this abundance, unfortunately, “went in a wrong direction, as today it is considered a luxury if you drink and eat unhealthily.”

“We had homemade and healthy products before, and we are all healthy adults. When I went to school and studied medicine, one assistant professor told me – wait for this “chocolate generation” to come and the strokes will happen to 40- and 50-year-old people. This time has come. We need to talk about this with our children and youth. Parents need to become good examples and show to their children why it is important to eat healthily. As a parent, you need to eat healthily, so your child would see what it looks like and that it is not expensive or impossible to eat healthy,” explains Ms. Sabaha.

Also, her friend from the Center, Fatima Landža, believes that the workshop was useful for the youngest. She says that they talked to the children about what they did and ate when they were little, that they did not have the things children today have, and the children listened carefully and accepted new knowledge.

“The different times came, parents have a faster pace of life, they are often in a hurry. Our mothers had more time to think about the meals. But, children need to be taken care of and learned what is healthy and what is not. Parents today give children one or two marks, and they go and buy themselves chips or a cola, which is not recommended,” says Ms Fatima.

Sejdefa Bašić Ćatić, the Executive Director of the Association Partnership for Public Health, which is one of the partners of UNICEF, said that the project “Nutrition Friendly Schools” came as a natural sequence after the successful implementation of the project “Nutrition Friendly Kindergartens” by the UNICEF Bosnia and Herzegovina, in the past few years, in the cooperation with the public health institutes and the Association of Chefs of Bosnia and Herzegovina.

“We knew that the next step was to work with primary schools, having in mind the kind of diet offered to children in schools, because they either bring lunch from their homes or buy it in schools. We visited several schools and noticed that sweets, industrial and carbonated juices that are full of sugar are sold in schools, and juices and snacks are often advertised. If we know that only Coca-Cola contains about twenty packs of sugar, which is too much of the so-called fast energy for every child, then we understand the importance of implementing this project,” says Sejdefa.

In the realization of the project, the Association of Chefs of Bosnia and Herzegovina, whose members promote healthy food, is again included in the project and are always happy to respond to calls for workshops of this type. The focus of all previous workshops held in November and early December was on children and parents, when nutritionists and chefs explained, through practical and interesting examples, how to combine healthy food and quickly prepare a healthy and delicious meal.

“At workshops, we break prejudices that healthy food is too expensive and that it takes a lot of time to be prepared. We give practical tips on how to prepare a meal quickly, cheaply, and of high quality. Today, we all have a blender, and sometimes it is enough only to mix fruits and vegetables to have a ready meal that is healthy. I am very pleased to participate in these workshops. Nowadays, we are all busy and we are hardly able to focus on what matters, but we must be aware that we have to dedicate ourselves to our children,” said Nermin Hodžić, the President of the Association of Chefs of Bosnia and Herzegovina.

UNICEF Bosnia and Herzegovina conduct the project “Nutrition Friendly Schools” in cooperation with the competent ministries, public health institutes, NGO Public Health Partnership and the Association of Chefs of Bosnia and Herzegovina. Under the slogan “Eat Well, Grow Well”, our goal is to, together with children, parents, and teaching staff, develop awareness of the importance of adopting and nurturing healthy lifestyle habits.

The goal of the project, which is implemented according to the methodology of the World Health Organization, is not only to promote healthy diet among children and youth, but also to influence the adoption of appropriate policies at the level of educational institutions that would place healthy living habits in the general program and continuously promote them. 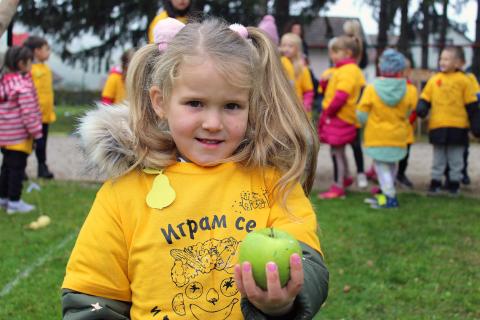 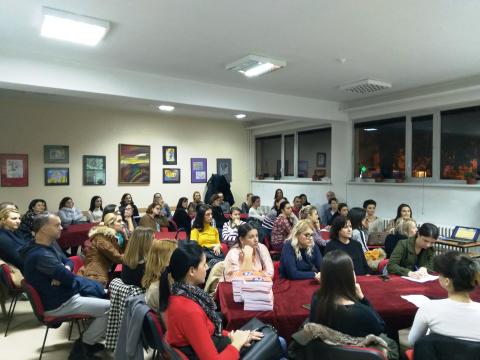 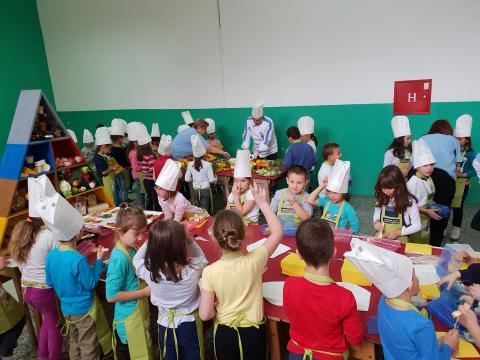 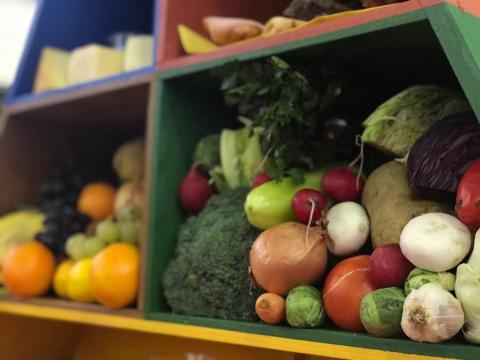