Consolidated report on the quantitative and qualitative research

The research ‘Voices of Youth’ was conducted as part of the project ‘Dialogue for the Future’, implemented by the UNDP, UNICEF and UNESCO in partnership with the Presidency of Bosnia and Herzegovina. The United Nations Office for Peace Building Support/Peace Building Fund (PBF) project finances the project Dialogue for the Future. The research was conducted in the form of quantitative research and surveys and based on a representative sample of the general population of youth aged 15 to 30 years (N=2.016 participants) in BiH. The sample contained at least 100 young people (total N=224) belonging to the vulnerable categories: ‘youth’, ‘Roma community’ and ‘youth with disabilities’. The qualitative aspect of the research involved focus groups. There were seven focus groups with different categories of youth in three cities in BiH: Sarajevo, Mostar and Banja Luka. Around 700,000 young people aged 15 to 30 live in BiH, which represents around 21 per cent of the total population. The results of this research support the conclusion that there is an urgent need to create the mechanisms and permanent solutions that will lead to an improvement in the general status of youth in BiH. It is evident that the status of youth as well as the status of other categories of the population depends on the material welfare of the total population of BiH. The plans, attitudes and level of satisfaction among youth correlate directly to the economic position of youth in society. In relation to the results of the research conducted four years earlier (2011/12), in certain spheres of life there are signs of progress yet at the same time there is also evidence of stagnation and even deterioration in others. The main conclusion drawn through this research is that young people continue to face different challenges, ranging from education through to employment and work, to security, social protection and their standard of living. The main problem for youth according to the results of the study is unemployment, followed by unresolved housing issues and material and economic dependence. The young people who participated in the research considered their status to be average; however, positive trends were noticeable. When compared to the research from 2011/2012, the young people seldom reported their standard worsening or remaining the same and their perception of the near future was positive: compared to 2011/12, the youth seldom responded that their future would be the same or worse.

Voices of Youth
Bosnia and Herzegovina 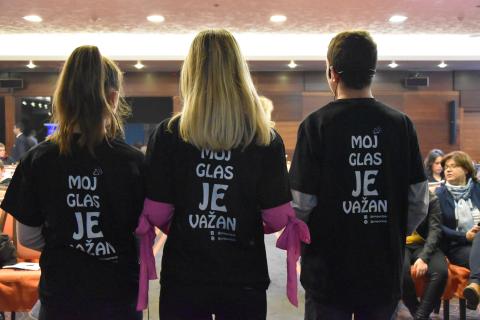 Official launch of U-Report in Bosnia and Herzegovina!