UNICEF promotes equal rights for all women and girls and supports their full participation in all spheres of social and political life.

The process of introducing gender equality in all areas of social life in Bosnia and Herzegovina requires, above all, action in terms of changing awareness and increasing knowledge about the causes and consequences of discrimination based on gender. Therefore, this is a very lengthy process that largely depends on numerous social circumstances and impacts at global, regional and local levels, and requires a thorough restructuring and reform of institutional policies.

The examples of gender inequality are first most noticeable when it comes to women’s participation in public and political life. Second, women’s position on the labor market is characterized by multiple burdens of women in the domain of market economy, and increased violence against women, including domestic violence.

In the last ten years, significant efforts have been made in Bosnia and Herzegovina to develop a domestic legal, institutional, and policy framework for the application of the principles of gender equality, which are largely in line with international standards. However, gender equality is still not treated as a priority of developmental and other strategies and is still considered as a matter that concerns only women.

UNICEF Bosnia and Herzegovina promotes gender equality among girls and boys, from their birth to adolescence, through public advocacy, and awareness-raising activities that are, in most cases, more likely to affect girls, but can also affect boys.

The promotion of the idea of gender equality is represented in all program areas of UNICEF Bosnia and Herzegovina. UNICEF also implements targeted activities aimed at raising awareness, protecting and supporting the realization of the rights of girls and women, such as preventing early marriage and improving their education through the acquisition of new knowledge and skills, especially in the areas of information technology, engineering, mathematics and natural sciences.

Systematically, the equal participation of women and girls in the development and implementation of the program is promoted, and activities in this area will be enhanced in the coming period. 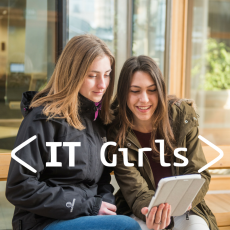 What is IT Girls?
Or why should girls be involved in programming?

IT Girls is a project that wants to encourage girls to start thinking about education and eventually potential career in the world of information technology, from early age on. It started off as an initiative of young employees of United Nations in Bosnia and Herzegovina, where this idea and this topic was voted as best one in the “UNder30 Innovation Challenge”.