Harare, Zimbabwe-At 2 months-old, Max would normally be reliant on breast milk only. Yet it has been weeks since he last breast fed and is compelled to eat unsweetened maize-meal porridge as is his daily diet.

It’s a sign of how Zimbabwe’s worsening food and broader economic troubles are taking a devastating effect on children.

For the nurses attending to Max at Rutsanana Polyclinic in Glen Norah suburb in the capital, Harare, such a diet is a “a big no”. But with the baby’s mother failing to produce enough milk due to the stress caused by her economic situation, maize porridge is the only available option.

The results are distressing: Max is so severely emaciated that he weighs less than a new born baby.

“Even if I try, Max refuses. He knows that nothing comes out of there, I can only manage a few drops and that’s it” said his mother, 23-year-old Chiedza, pointing at her breasts.

Max’s situation is part of a broader nutrition challenge faced by children in a country battling its worst economic predicament in a decade amid one of the worst droughts in four decades.

Nearly 1 in 3 children under five are suffering from malnutrition, while 93 per cent of children between 6 months and 2 years of age are not consuming the minimum acceptable diet and cases of Pellagra, a deadly disease linked to micro-nutrient deficiency are also on the increase.

To mitigate the health crisis, UNICEF with the contribution of the UN Central Emergency Relief Fund (UNCERF) and UKAID is working to provide life-saving and preventative treatment to around 650,000 children and women who are at risk of malnutrition by supplying therapeutic food (RUTF), micro-nutrients and vitamin A supplementation.

UNICEF is also supporting Harare City Council health facilities screen and identify children with signs of malnutrition and put them on the therapeutic feeding programme.

Nurses at Rutsanana Polyclinic discovered Max and his malnutrition, when his mother, Chiedza, visited the clinic for a routine check up in December.

Chiedza has not been eating adequate food to produce enough milk for her baby, said Jenipher Mudani, a nurse at the clinic.

“He is not growing, we call it ‘failure to thrive’ and as you can see he has a ‘moon face’,” said Mudanhi.

She added, “This is about malnutrition resulting from poverty. We can’t do much because at his age, we recommend exclusive breastfeeding in Zimbabwe but the mother can only express 5mls at best. They are too poor to buy their own food so forget about alternative feed for the baby,” said Mudani.

Seemingly hungry and dehydrated, Max is always on alert and cries frequently. He constantly puts his fingers in his mouth, a sign of hunger, said the nurse.  It’s almost impossible to identify any muscle growth on him. His sagging skin responds to even the tenderest touch by forming little pockets.

Because of his weight, my son is missing out on the clinic’s UNICEF-supported immunisation programme, putting him at more risk.

“His immunity is very low, he is a high risk patient,” she said, standing outside the family’s dwelling in the densely populated Stoneridge suburb on the outskirts of the city.

The conspicuous wooden shack is what Chiedza and her husband, Munyaradzi (42), call home in a suburb where most houses are made from brick. A few burnt out twigs hardly enough to start a fire stood at the centre of a makeshift brick fireplace outside the shack. A plastic bag with baby clothes lay abandoned next to the fireplace.

Inside the stuffy shack supported by a pole and mud, the only sign of food was a pot of tea. Munyaradzi said the tea had been his only “meal” that day. As for his wife and the baby, the sorghum drinks she received from charitable nurses at the clinic would suffice.

“We sometimes go for two days without eating a proper meal. Sometimes we just eat mangoes and save the mealie-meal for Max’s porridge,” he said, putting his hands on his cheeks and emptily starring at his small field of a stunted, drought-affected maize crop.

He sometimes does odd jobs such as fetching water for neighbours and said he gets US$5 on a good week.

Such poverty is putting a strain on children, said Nurse Mudani.  “Cases of malnutrition are increasing.  Because of the economic hardships some families go for days without eating a proper meal,” she said.

Malnutrition on the rise but help is on the way

Zimbabwe is battling its worst economic hardships in a decade, highlighted by spikes of hyperinflation, currency instability, widespread electricity shortages and fuel and food scarcity. One of the worst droughts in decades, heightened by climate change, has worsened the situation in a country heavily reliant on rain-fed agriculture resulting in over 7.7 million people living with food insecurity.

Nearly 100,000 children under five are suffering from acute malnutrition and over 1 million young children are not eating well enough to thrive. In response, UNICEF has prioritized the prevention and treatment of malnutrition among children, pregnant and breastfeeding women in 25 priority districts in Zimbabwe.

UNICEF provides nutritional support including early detection and treatment of infants and children under 5 suffering from severe acute malnutrition and preventative nutrition services for young children and pregnant women and lactating mothers.

There are fears that the situation could deteriorate further, and that increased donor support is much needed, said Mathieu Joyeux, the UNICEF Zimbabwe Nutrition Manager.

“What we see is this kind of double burden where people are waiting for their new harvest and then people can’t afford to buy food. People are defaulting back to low quality food. So we are supporting volunteers in the communities that are doing door to door screening - checking the situation of children and women,” said Mathieu.

“We are in the process of scaling up interventions but that needs more support. More outreach, more scale up means more resources are needed,” he said.

If picked up early enough and children have access to timely treatment, they can recover quite quickly. For underweight baby Max and many other children facing potential malnutrition and food insecurity, lifesaving interventions at UNICEF-supported clinics could see him back to health in a matter of months.

*Names have been changed 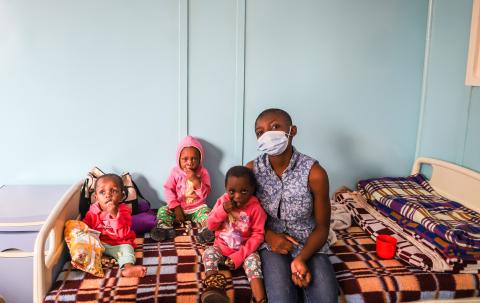 Sixteen-year-old, Fortune Maseko, lights up as she waves a piece of paper with her drawing of her favourite television characters. 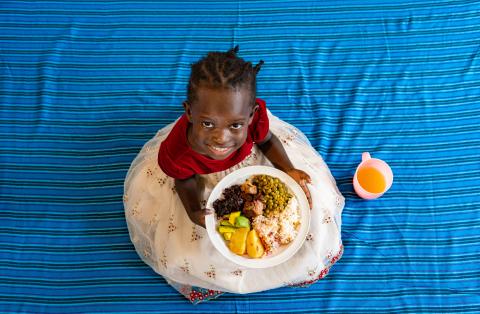 Importance of Integration of Nutrition, HIV and TB health

Miriam was diagnosed as suffering from severe acute malnutrition, the nurse-in-charge noted that Mirriam was underweight for her age 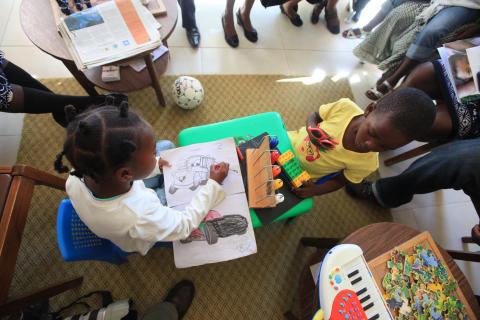