Youth Voices from the Sahel on Climate Change

The Sahel is home to more than 230 million young people under the age of 24.

Despite the challenges they face, these young people have rights, hopes and dreams. Their voices deserve to be heard.

A youth that represents change, that speaks up and brings about innovative solutions. A youth that is actively involved in shaping a better future.

The public debates organized by UNICEF aim to bring together 100 young people from the Sahel to discuss climate change, a theme that particularly affects them as the Sahel is one of the regions most affected by the current crisis.

Who are the young people participating in the debate on climate change? 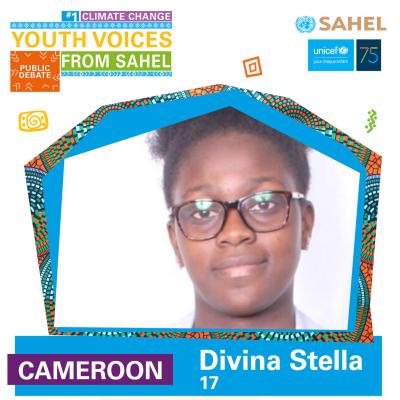 Divina is a well-known young activist. She works in challenging environments, mobilizing children in complex contexts to implement action plans and projects. 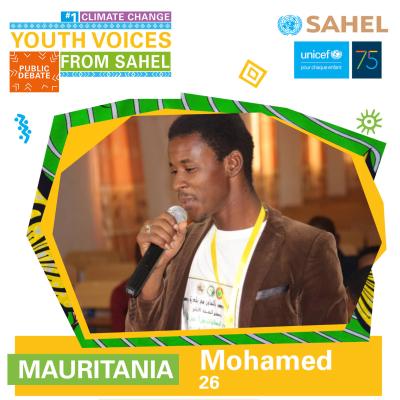 Mohamed helps mobilize young people in a sustainable way on both current and future climate issues and challenges by making them key actors of change. 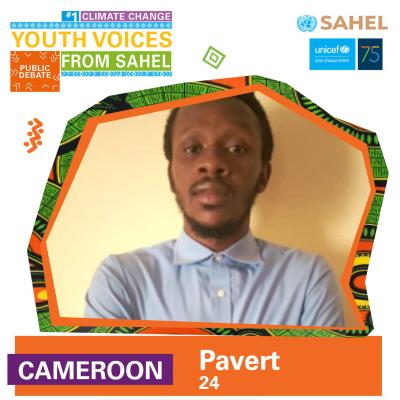 Pavert is 24 years old and works as a biogas technician in Cameroon. He is also in charge of coordinating training programs for a common initiative group. 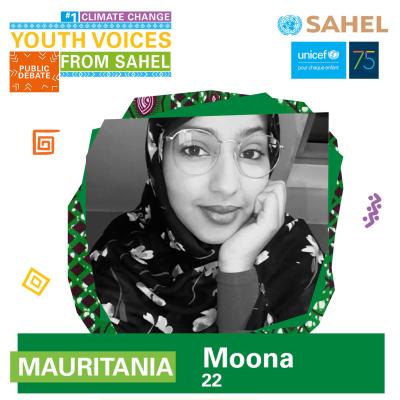 A young Mauritanian from the diaspora, Moona is committed to human rights and building a better world through writing and engaged poetry. 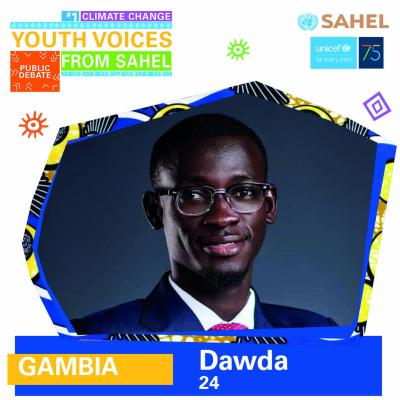 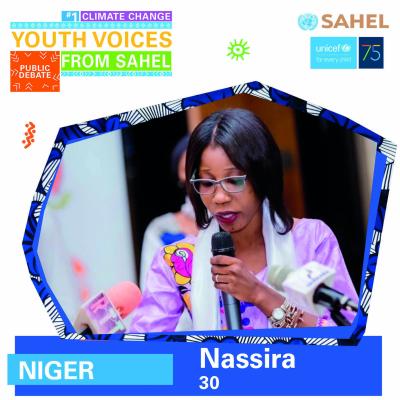 Nassira is a young woman committed to youth entrepreneurship, the empowerment of young girls, the fight against child marriage and gender-based violence. 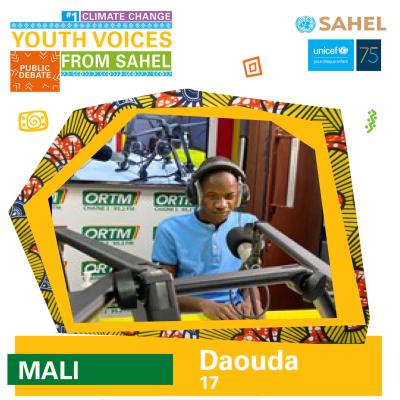 Daouda is passionate about protecting the environment. He has participated in many reforestation actions in the regions of Koulikoro and Segou. 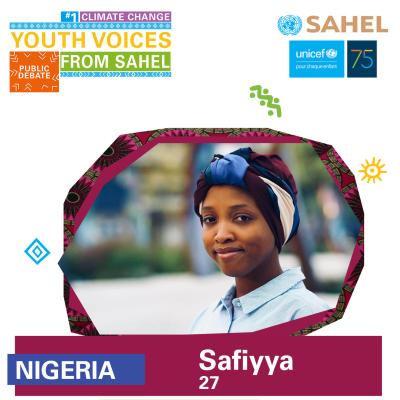 Safiyya is a civil engineer from a Northern Nigerian state where water is a significant challenge. She works to improve the quality of living in her community.

OPEN LETTER FROM THE YOUNG VOICES OF THE SAHEL

Recommendations from the Young people’s voices from the Sahel

On November 20, UNICEF gathered 100 young people from the Sahel in a live online public debate on climate change, where they shared their opinion and understanding elaborated in their pre-debate work and made recommendations to policy makers, their Governments and the international institutions in charge. Here is their message.

In the movies, the earth always has a superhero to save it when it is in danger. In real life, there is no caped crusader on the horizon, only the prospect of an apocalypse. It's almost here, already. It is called global warming. The Sahel, in particular, is burning. The increase in temperature will soon be 1.5 times higher than in the rest of the world (reaching 3-6° C). Our countries have already been hit by severe droughts in 2005, 2008, 2010 and 2012, and by increasingly frequent and severe floods in 2020 and 2021. Rising oceans are eroding our coasts, while our forests are shrinking. Climate change in the Sahel is not a threat but a reality that we live with every day. Water scarcity causes conflicts and displacements, and when rains flow in abundance, it overflows from soils too dry to absorb it, ruining crops, homes, and public infrastructures.

The Sahel is responsible for only 4 per cent of greenhouse gas emissions. However, the children of the Sahel are among the most affected in the world by the harmful consequences of global warming, the lack or overflow of water, pollution, and urbanization carried out with no consultation.

Policy makers in "rich" countries have promised 100 billion dollars per year to fight against the effects of climate change in "poor" countries, including the Sahel region. We are made to dream of a great green wall that would protect us from the desert. Ten years have passed, and these promises have not materialized, or only slightly.

We, the 320 million young people of the Sahel, represent more than 60 per cent of the region's population. We are the youngest population in the world, and we will be the decision makers of tomorrow. It is our future that is at stake, along with that of all humanity.

So it is time for change and to move on to the side of hope. It is time to give us, adolescents and young people from Burkina Faso, Cameroon, Chad, Gambia, Guinea, Mali, Mauritania, Niger, Nigeria and Senegal, the means to be the heroes who will save our beautiful planet.

We do not want to suffer from climate change, we want to build a world where every child, every woman, every man, will grow and flourish in a healthy and, above all, livable environment.

In this open letter, we therefore address all those who have the power to change things:

Starting with us, the youth from the Sahel:

- To inform and document ourselves so that our generation is fully aware of the extent of the effects of climate change;

- To engage ourselves more in actions and initiatives to fight against climate change, in favor of the preservation of the environment and the mitigation of the effects of climate change, such as: hygiene and sanitation, recycling of plastic waste, production of nurseries and reforestation;

- To encourage the populations to plant trees, by seizing every opportunity, for example, the celebrations of weddings, births, birthdays, diplomas .... Thousands of trees would be planted every day in sub-Saharan Africa alone.

It is up to you, the leaders of Sahelian countries and representatives of local communities, to:

- Educate young people and adolescents to increase their knowledge and understanding of climate change: schools must become a place where awareness and knowledge are built, and ecology must be integrated into the school curriculum;

- Plan and organize urban development, including the creation of sewage and rainwater drainage systems;

- Knowing the importance of trees in the regulation of temperature and air, invest to plant massively trees and to arrange green spaces in the big cities, with perimeters of games for children. This will not only improve air quality, but also make children aware of climate issues while having fun. Thus they will grow up and become eco-citizens;

- Massively invest in renewable energies (solar, wind) and subsidize their access for households;

- Encourage green alternatives to cutting firewood for households, for example by subsidizing the use of gas instead of coal: legal bans discriminate against the poorest households;

- Finally, include youth in the definition and implementation of national policies to fight against global warming.

To the international climate bodies and the United Nations, we ask:

- To accompany the countries, communities and youth organizations of the Sahel in their efforts to fight climate change, in particular by concretizing the financial pledges which are not a gift but a due to the least polluting but most impacted countries;

- To listen to, and carry, the voices of the youth of the Sahel who are on the frontline of discussions and decisions concerning the climate. Thus the problems of young people will be taken into account in every major decision that concerns the world.