When horrific violence erupted across the Kasai region of the Democratic Republic of the Congo in 2016, hundreds of thousands of people ran for their lives. They were forced to abandon their homes, villages and, in some cases, older or ailing family members. Many of those who had to flee were children.

The most fortunate children and families found refuge with relatives or friends in calmer parts of the region. But many more were internally displaced, living under the open sky amidst the trees and bushes of the vast, unforgiving savannah. These families on the move had no access to health care, food or safe water. They had no matches to light a fire, no mosquito nets to protect them from malaria.

Months of desperate existence followed. With nothing shielding them from the threats they faced – ranging from snakebites to waterborne illnesses – many people fell ill and died. The rest struggled to stay alive as fighting raged on around them.

Today, despite a lull in the fighting since the second half of 2017, waves of displacement continue because of persistent insecurity and fears of resurgent violence. Where the conflict has abated, some displaced people are returning to what is left of their villages. Often, they find that their homes and all of their possessions and livestock have been destroyed or stolen.

According to the United Nations Office for the Coordination of Humanitarian Affairs, 3.8 million people in the Kasai region are in need of humanitarian assistance, including 2.3 million children. What is happening in Kasai is truly a children’s crisis. 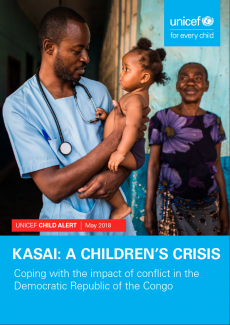