Outside the Primary Seven classroom block at Nabitende Primary School in Iganga District, Jane (not real name) is surrounded by classmates as she peeps through a mathematics test paper she sat in the morning. Despite arriving at school late, she scored 85 per cent.

Just a year earlier when she was 14 years, her life took an ugly turn when she was sexually abused while coming from a party in the neighbourhood. Most people in her community did not envision her in a classroom setting again.

When she reached home, Jane told no one about the act due to fear of punishment and for the next two months, she kept her secret – until when she developed malaria-like symptoms; body weakness, vomiting and nausea.

When Jane visited Mama Umar’s Clinic – a private health facility close by, her world crashed once more when the nurse broke the news that hers wasn’t malaria but a three-month-old pregnancy.

The nurse further took the initiative to inform Jane’s mother, Fatuma but her father, Iddi would find out a lot later from village rumour mongers because both Jane and Fatuma could not martial the courage to break the news to him.

“When we found out that our daughter was raped, we did not go to the police because it was too late. All evidence to support our case had already been lost. I went to the perpetrator’s home and spoke with his parents. They accepted to take care of the baby,” Fatuma says.

Fatuma took her daughter through the process of healthy living and feeding for her to deliver a healthy baby.

At around 9 a.m. on 15 October 2020, Jane felt a sharp pain in the lower abdomen when her mother had gone to the garden.

“I screamed loudly alerting my grandmother who was tending to the garden behind the kitchen. We tried to call a boda-boda motorcycle to rush me to the clinic but it was too late. I gave birth at home to a girl and we wrapped the baby with my blanket to keep her warm. I named her Surprise,” she says.

Igumba had supported Jane to start a grocery business,  counselled her and hosted her for a radio talk show on Eye F.M in Iganga Town where she spoke about her experience.

During the Go Back to School Campaign supported by UNICEF, Edaru visited Jane’s home bearing gifts and good news.

“At first, she wanted to hide when she saw me, but I called her out and gave her a welcoming smile. I told her I had come to congratulate her, carried the baby and informed her that she is welcome back to school to continue with her studies,” Edaru says.

With support from UNICEF through the Ministry of Gender, Labour and Social Development (MGLSD), male and female teachers were trained on how to make the environment at school conducive for children who suffered abuse and had dropped out as a result.

According to a UNICEF Uganda’s September 2021 report, student enrolment in the project districts of Kaabong, Kamuli and Iganga increased due to this intervention funded by the Spanish National Committee for UNICEF.

Jane is among the 820 pupils who had previously dropped out of school due to teenage pregnancies, child marriages and economic hardships but resumed school when the Government of Uganda lifted the two-year school closure on 10 January 2022.

With the psychosocial support provided by the Iganga District Probation and Social Welfare office with UNICEF support, Jane is now a champion of the fight against violence and teenage pregnancies.

According to Said Mukoto, the Iganga District Senior Probation Officer, over 30 para social workers have been trained and deployed in each of the eight sub-counties in the district, thanks to UNICEF and its partners the  Spanish National Committee for UNICEF and the Basque Government that made this possible.

Jane, now in Primary Seven, has been elected President of the Trailblazer Girls Education Club supported by UNICEF through the Trailblazer Mentorship Foundation (TMF). Her dream is to be a teacher like Edaru who gave her a second chance at education. Not only did he allow her back in school without a uniform, but he also paid her school fees this term.

The supportive environment she enjoys both at home and school is reflected in her improved performance at school. 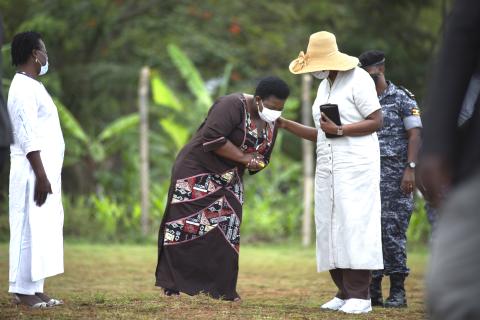 Teenagers pledge to abstain from sex to prevent pregnancies

The First Lady, who doubles as the National Champion for the ‘Protect the Girl, Save the Nation’ campaign, urged participants to make good choices, defy soc 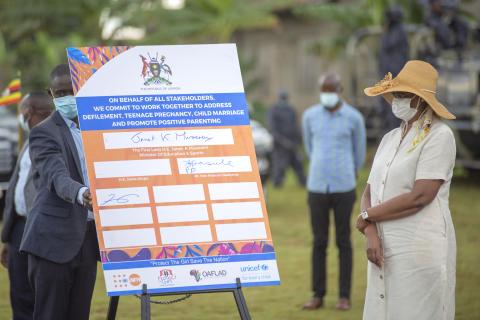 What more can be done to curb teenage pregnancies 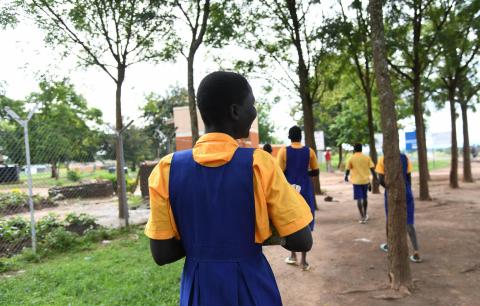 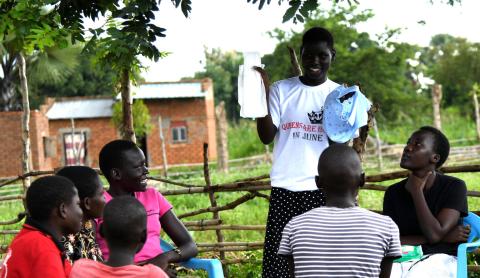 "What boys can do, girls can do as well and we are all equal"