In Turkey, UNICEF focuses on the most vulnerable children and families affected by the Syria Crisis and the Refugee and Migrant Crisis in Europe, helping them build resilience and positive foundations for the future

Since 2015, Turkey has hosted the largest registered refugee population in the world. Over 4 million refugees and asylum-seekers are currently registered in Turkey, of whom nearly 1.7 million are children.

As the conflict in Syria enters its 9th year, more than 3.6 million Syrians – including 1.6 million children – are under temporary protection in Turkey, 96 per cent of whom live in host communities across the country.

Turkey also hosts a sizable community of non-Syrian refugees and asylum-seekers of almost 370,000 (primarily from Afghanistan, Iraq and Iran), including some 120,000 children.

In addition, Turkey remains a transit country for unregistered refugees and migrants on the move. Since 2015, more than 1.1 million refugees and migrants have made the arduous journey from Turkey to nearby Greece, most of them fleeing conflict or seeking greater opportunities in Europe. An additional 180,500 were rescued or apprehended, and at least 1,500 have died or went missing in the attempt. Of those who successfully crossed, more than one-third are children.

Nearly a decade on, the immense scale and scope of the Syria Crisis has placed enormous strain on Turkey’s basic services and infrastructure, and refugee families in Turkey remain highly vulnerable. According to recent assessments, nearly 12 per cent of Syrian refugees continue to live in extreme poverty (defined as less than US$ 3.20 per day in Turkey), and 59 per cent in moderate poverty (less than US$ 5.50 per day). The contraction in the Turkish economy in 2018 and associated inflation placed additional burdens in the struggle to provide for their families.

The situation for refugee and migrant children remains particularly challenging. An estimated 400,000 Syrian children remain out of school and face difficulties such as a lack of awareness of available services, language barriers and socio-economic obstacles.

Refugee and migrant children – particularly those out of school – are also acutely susceptible to numerous protection risks, including isolation, discrimination, and various forms of exploitation.

Moreover, years of conflict and displacement continue to have a significant impact on their psycho-social well-being which, if not addressed, can have a lasting negative impact on their development. Syrian children and families are at a crossroads, and the risks of inaction are grave. An entire generation of Syrian children is at stake.

The Government of Turkey leads the overall crisis response and remains the largest provider of humanitarian aid to Syrians as well as other refugee and migrant groups – more than US $30 billion to date, according to official estimates. UNICEF supports these national efforts, guided by the Core Commitments for Children in Humanitarian Action .

Under the frameworks of the 3RP and the “No Lost Generation” Initiative, UNICEF works in five priority areas – Education, Child Protection, Adolescents and Youth, Health, and Basic Needs – to reach Syrian children and adolescents in camps and host communities, as well as vulnerable Turkish children affected by the crisis. UNICEF also provides targeted protection and basic needs support to vulnerable non-Syrian children and families on the move across Turkey.

Given the protracted and complex nature of the crisis in Turkey, which affects both refugee and Turkish children, UNICEF’s humanitarian action is integrated across the entire country program. We are committed to working through existing national and community-based systems, bridging the humanitarian-development nexus to better respond to the immediate and long-term needs of all children.

The aim is to build the resilience of vulnerable children and families to protect them against future shocks, while promoting social cohesion between the Turkish and refugee communities.

This work is further strengthened by data collection on child rights violations, through the Monitoring and Reporting Mechanism, as well as generating evidence, which can be used to reinforce and amplify UNICEF’s advocacy.

Together with the government and NGO partners, UNICEF is striving to prevent the loss of an entire generation of Syrian children in Turkey. But we cannot do it alone.

In 2019, UNICEF is appealing for US $239.4 million to meet the needs of Syrian children in Turkey under the Humanitarian Action for Children (HAC). Click here to see how you can help. 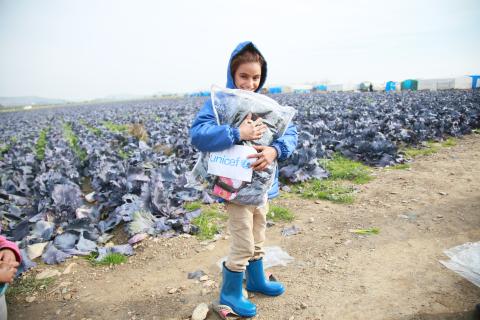 UNICEF works to ensure that children who have been forced to flee their homes receive vital support needed to prepare for cold winters.