MICS – Taking evidence based development to the Himalayas

Gilgit Baltistan - November 2017: “The proposal of conducting the first ever Multiple Indicator Cluster Survey (MICS) in Gilgit Baltistan, a region which has yet to establish a Bureau of Statistics, did not seem like an idea that could easily be executed,” says Babar Aman Babar, Secretary Planning and Development Gilgit Baltistan. “Today, the MICS has not only become a reality but has also garnered support from the residents and authorities all over the region. We hope that the data which has been collected through MICS will serve as a baseline for evidence based development planning.”

Since its inception in 1995, MICS, an initiative of the United Nations Children’s Fund (UNICEF), has become the largest source of statistically sound and internationally comparable data on women and children worldwide. Trained fieldwork teams conduct face-to-face interviews with household members on a variety of topics – focusing mainly on issues that directly affect the lives of children and women. UNICEF assists countries in collecting and analysing the data to fill gaps, and for monitoring the situation of children and women through this international household survey.

Gilgit Baltistan (GB) region is the northern most territory of Pakistan. With an area of 72, 971 square kilometres, it is home to three of the tallest mountain ranges in the world; namely the Himalayas, Karakoram and Hindukush range. To reach out to people living in isolated settlements scattered across the 10 districts situated in these mountains did not seem viable at first. However, the resolve of the people working in the Planning and Development (P&D) department and the volunteers inducted into survey teams, have turned the monumental task into a reality. The GB_MICS was not only executed within the allocated 100 days but has also brought in data of the highest quality.

“We are very proud of the work being done by the teams of youngsters who reached out to households in some of the most difficult to access terrain, that too in harsh winters,” says Muhammad Nazir Khan, MICS project coordinator at P&D. “Our teams have been going house to house, sometimes trekking for hours to reach their subjects. They have not only collected the information, but have built trust among the residents and given them hope about the government’s intentions for building a better future for them and their region.

UNICEF has strategically invested in data collection and helped transform the data landscape for more than 20 years. The global MICS programme is the centrepiece of this strategy. MICS findings have been used extensively as a basis for policy decisions and programme interventions, and to influence public opinion about children and women around the world.

As a key source to generate data on equity, MICS will play a key role in tracking progress towards elimination of disparities and inequities as part of the SDG indicators. While UNICEF and its partners work with national governments to accelerate improvements in the lives of the most vulnerable, MICS produces the data to validate the results of the focused interventions.

“Conducting the GB- MICS was by far the most challenging survey I have ever conducted, as we had to start from the scratch,” says Fatehuddin Ahmed, PME Officer UNICEF. “For the initial phase, more than 100 people were selected and trained by local and UNICEF staff. Fifteen teams, each comprising of five females and two males were dispatched to conduct the survey in 30 clusters and complete the survey within the allocated 100 days.

"We hope this survey solves our issues. Due to our remote location, our problems can never reach the authorities otherwise."

Gulzadi and her husband Azizullah live in a remote village of Ghizer District, along with their three children Danish (7), Daniyal (4) and Saadia (2). Their household has been selected for one of the survey clusters. With no government school or hospital in the vicinity, the visit from the MICS team brought hope for betterment to this impoverished family.

“With no healthcare or education available in the area, what choice do my children have other than to become untrained labourers?” asked Gulzadi while giving information to the team members about the lack of basic facilities in her village. “We hope that this survey can help solve our issues, as we live in such a remote area, our problems can never reach the authorities otherwise.

While some villagers were keen to provide information, in the hope to improve their living conditions, others were downright hostile when the idea of a survey was presented to them.

Ayesha Nazir, Assistant Chief P&D was sent to the Diamir District as a Technical Monitor, where the survey team comprising of men and women, were uncomplacent to the strictly conservative local traditions.

While some villagers were keen to provide information, in the hope to improve their living conditions, others were downright hostile when the idea of a survey was presented to them.

Ayesha Nazir, Assistant Chief P&D was sent to the Diamir District as a Technical Monitor, where the survey team comprising of men and women, were uncomplacent to the strictly conservative local traditions.

“We faced a most precarious situation when the survey team reached UC Tangir in Diamir District to conduct the survey,” said Ayesha. “As soon as the surveyors alighted their vehicles, one of the local mosques started announcing that anyone who cooperated with the MICS staff would be considered an infidel. We had to evacuate the area immediately for the safety of the survey team. It was only after extensive social mobilisation efforts that the team was let in again, that too with the continuous security from paramilitary forces accompanying the surveyors throughout their visit.”

"The MICS data is going to be the backbone of development in GB region."

Once collected, all the data was submitted to the data processing unit established in cooperation with the P&D department. Here, the data was subjected to a multi-layered rigorous checking system for the verification of any structural errors before it is entered in the system.

“The MICS data is going to be the backbone of development in GB region,” said Fatehuddin Ahmed, UNICEF. “We will now be able to tell the average level of education achieved in a UC, just by looking at the statistics collected by MICS, to fill in gaps critical to the progress and development of the region and the whole country.”

The results of GB- MICS have been published in cooperation with the National Bureau of Statistics and can be accessed on the following links: 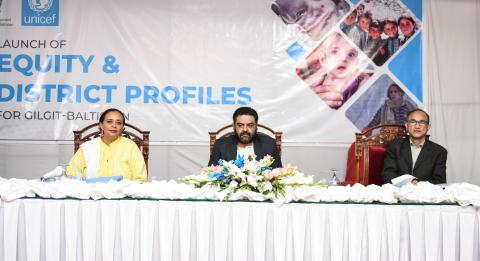