Winning time to prepare for the dire impacts of climate change

Access to water for five communities in Tahoua has changed their everyday life. On the bigger picture, the villagers now feel enabled to adapt to the dire impacts of climate change.

A joint UNICEF-WFP project to increase the resilience of communities in Tahoua funded by the German Federal Ministry for Economic Cooperation and Development brought water to five communities with 7'600 people and also ended the widespread practice of open defecation.

The impact has been far-reaching with women and children spending less time on the laborious quest to fetch water, girls and boys not missing half of the classes and the nutritional status of children improving (read more in this article).

"It is simple, every year there has been less rain", said Adamu Abubakar, a 44-year-old farmer. His words meet approval in the group of about 40 women and men we meet in a sweltering hot communal building next to the small Mosque of Tacha Adoua.

"When I was a boy there were trees everywhere and everything was green! Now everything is brown and sandy."

The lack of water has not been a constant in the life of the villagers. Mr. Abubakar remembers that three decades ago the surroundings were very different and water was not a permanent source of chagrin.

"When I was a boy there were trees everywhere and everything was green!" he said. "Now everything is brown and sandy." Looking outside into the bone-dry environment under the scorching sun it is difficult to visualize the past he is referring to.

Mr. Abubakar's family has been farming for many generations, working the fields handed down from father to father. But the land that has been sufficient to feed the family in the past nowadays only barely produces enough yield for survival.

While the rains have become fewer, they have increased in intensity, often leading to natural disasters like flooding and destruction of houses and fields. Four out of five Nigeriens depend on agriculture agricultural for income, largely rainfed farming and livestock keeping.

"What we are experiencing with the rains is the effect of climate change. We need to adapt. There is no way around it", said Mr. Abubakar. In the lean season between the two harvests, he started gardening to expand the diet of his family and sell some produce on the market of the closest city, Tabalak. He grows onions and tomatoes, watering the plants with the water from the new well.

"Now, there is enough water. This makes life easier for the herders and for the farmers, because there are no conflicts anymore."

Not only the farmers are benefitting from the water. Shafiou Al Hassan, 54, whom we meet at a fountain between the Mosque and the primary school of Tacha Adoua, is a pastoralist who relies on livestock rearing for income.

"There are four troughs for animals that get water from the big well. We now can bring our animals to the troughs like in earlier times when water was still readily available", he said.

The struggle for water in the past years repeatedly created conflict amongst the communities, including struggles between pastoralists and farmers over what was often perceived a competition for water, a scarce resource in the region affected by climate change.

"Now, there is enough water for all of us ", said Mr. Al Hassan. "This makes life easier for the herders and for the farmers, because there are no conflicts anymore."

"Before we had water in the villages, we spent at least half a day getting water. (...) Now we can use the time we save to prepare for the future and find new livelihoods."

Mr. Abdulrahman, 50, in a green boubou with a yellow scarf wrapped around his head to protect him from the sun, also relies on livestock for his livelihood. He watches Abdulrahman, 10 years, from a neighboring hamlet fill jerry cans with water from a hose at one of the village's four fountains.

"In the past, many pastoralist families had to leave the village during the dry season and move around to find water for the animals. Now, we have more stability", he said.

"Before we had water in the villages, we spent at least half a day getting water. That was most of our time. Now we can use the time we save to prepare for the future and find new livelihoods", said Mr. Hakimi, the chief of the village who goes by a single name.

The family of Yassin Mahamadou, a woman sitting on the water management committee, relies on dairy production and selling the products in the village. "Now that the animals always have water, they give more milk and we can produce more cheese", she said.

Producing the salty cheese that is served in thin slices is typically the domain of the women. "This is a first step. But now we need to learn how to run small businesses and sell the cheese on the local markets."

"Now we have time to get ready for what will come. Our children now go to school the whole day, they learn better and are healthier. They will be better prepared for their future."

"There were times when we walked with our jerrycans from house to house [in the city of Tabalak], knocking on doors and begging for water", says Ami Wandura. "These times are now over. We are not only a village anymore, but a village with water. Everyone now knows that", she said with pride.

Like the other members of the community, she is looking forward with optimism: "Now [that we have access to water] we have time to get ready for what will come. Our children now go to school the whole day, they learn better and are healthier. They will be better prepared for the coming changes and their future."

A water pump and solar panels

At the heart multi villages water system that serves five villages in Tahoua region is a well of 540 meters depth that taps into the water table. An array of solar panels provides the energy to the powerful pump that fills the reservoir with a capacity of 100'000 liters on a 10-meter-high water tower.

From there, a pipe system carries water to 16 fountains, 4 drinking troughs for animals, 5 schools and 1 health center. A water management committee made up by representatives from the communities takes decisions on the use of the water, collects fees and ensures maintenance and upkeep.

The project is part of the German Federal Ministry for Economic Cooperation's funding to improve resilience in the Sahel. 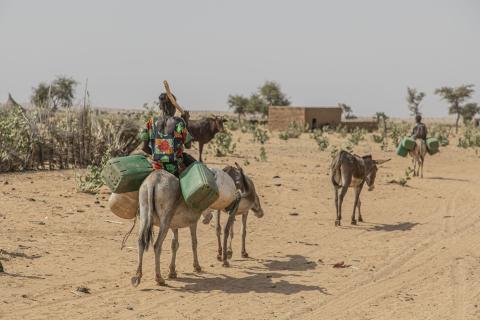 When five communities in Tahoua Region got access to water, the lives of the villagers changed dramatically, most of all for women and children. 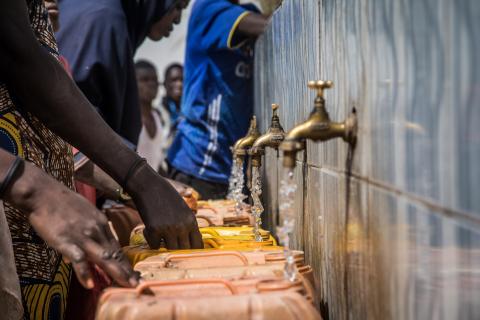 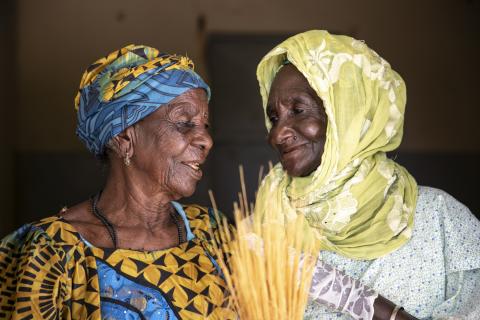