The state of the world's children 2007

Women and Children - The Double Dividend of Gender Equality

Gender equality is central to realizing the Millennium agenda, which risks failure without the full participation of all members of society. Within the Millennium Declaration and the Millennium Development Goals, and at the heart of the United Nations itself, is the acknowledgement that the vulnerable, especially children, require special care and attention. Gender equality will not only empower women to overcome poverty, but also their children, families, communities and countries. When seen in this light, gender equality is not only morally right – it is pivotal to human progress and sustainable development. Moreover, gender equality produces a double dividend: It benefits both women and children. Healthy, educated and empowered women have healthy, educated and confident daughters and sons. The amount of influence women have over the decisions in the household has been shown to positively impact the nutrition, health care and education of their children. But the benefits of gender equality go beyond their direct impact on children. Without it, it will be impossible to create a world of equity, tolerance and shared responsibility – a world that is fit for children. Yet, despite substantial gains in women’s empowerment since the Convention on the Elimination of All Forms of Discrimination against Women was adopted by the UN General Assembly in 1979, gender discrimination remains pervasive in every region of the world. It appears in the preference for sons over daughters, limited opportunities in education and work for girls and women, and outright gender-based violence in the forms of physical and sexual violence. Other, less obvious, forms of gender discrimination can be equally destructive. Institutional discrimination is harder to identify and rectify. Cultural traditions can perpetuate social exclusion and discrimination from generation to generation, as gender stereotypes remain widely accepted and go unchallenged. Eliminating gender discrimination and empowering women will require enhancing women’s influence in the key decisions that shape their lives and those of children in three distinct arenas: the household, the workplace and the political sphere. A change for the better in any one of these realms influences women’s equality in the others and has a profound and positive impact on children everywhere. This report intends to provide a road map to accelerate progess towards gender equality and empowering women through education, financing, legislation, legislative quotas, engaging men and boys, women empowering women and improved research and data. 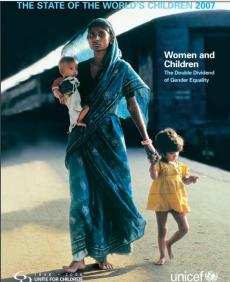