Investing in the Early Years

A child’s early years are one of the most critical periods of human development. Already at this time – with the size of a child’s brain reaching 80% of that of an adult by age 3, and 90% by age 5 – children acquire the ability to think, communicate, express emotions and form relationships. This period can be compared to the foundations of a house. If the foundations are solid, there is a strong chance that later periods in life will be optimal. Conversely, if the foundations are shaky, the later periods will be unstable. According to the Nurturing Care Framework developed by WHO, the World Bank Group and UNICEF for optimal development, children need good health, adequate nutrition, opportunities for early learning, safe and secure environments and responsive caregiving. Early adversities, such as poverty, harsh discipline, inadequate support for children living with disabilities, and institutionalization, are putting young children at risk of not reaching their full developmental potential. What takes place later in a child’s life remains important for maximizing their potential. 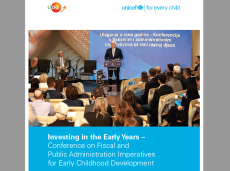