“It was like a movie. Nobody could believe what was happening”

The arrival of hurricanes in the midst of the COVID-19 pandemic has increased the vulnerability of this population even more, especially that of children and adolescents.

“It was like a movie. Nobody could believe what was happening,” explains in shock Florinda Yatchub, a mother who lives with her 4 children in Sacsi Chitaña, a small town on the outskirts of Cobán, in the department of Alta Verapaz, 217 kilometers north from the Guatemalan capital.

It wasn't until I could see it with my own eyes that I began to understand what she was referring to and the tremendous onslaught of storms Eta and Iota in this community.

Amid the coronavirus (COVID-19) pandemic, hurricane Iota made a tremendous impact on thousands of families in Guatemala and in other areas of Central America, already strongly impacted by Hurricane Eta.

Northern Guatemala has been one of the most affected areas, where landslides, mudslides, subsidence and flooding have forced families to sleep in shelters set up by the Government and other organizations.

Sacsi Chitaña is a peaceful town that is surrounded by mountains and thick vegetation. A dirt road crosses it. The house of Florinda and her family is located about 15 meters above ground on the side of a mountain.

Her home is humble, built on the ground with wooden planks. Inside there is a small kitchen and 3 beds on a clay floor. They have a hen with several chicks that roam freely inside the house.

On November 4, with the arrival of the first storm, the families of this town heard a deafening noise in the middle of the night. “It sounded like a bomb,” describe both Florinda and her 13-year-old daughter Jaqueline Vanessa Cuyat.

The town, which does not have a river, suddenly flooded in a matter of hours, “as if the water came out of the ground in a blast,” says Florinda. Before noon, the town was already submerged, and the houses underwater.

With the incessant rise of the water, the path that crosses the town disappeared. Many families were trapped and had to flee up the mountain.

“People couldn't believe that the water kept rising. But in a short time, the road closed. We had to go high up into the bush, where we could escape," she explains.

Florinda tells me that, in the case of other families, who had nowhere to go, they went to take refuge in the mountains. They stayed there for 15 days, trapped, under the rain and in the sun, until they were able to move to a shelter.

"There have been rains before, but never like this," she admits. The following days, the situation worsened, and more intense rains arrived. Many families that lost everything remain in shelters to this date.

Florinda and her children have been staying in a shelter along with many other families. Two days ago, they could finally return home to start rebuilding their lives with what they have left.

Florinda's story is not an isolated case. According to recent data, there have been over 2 million people affected by hurricanes/storms Eta and Iota , including 917,337 children in Guatemala. Currently, there are 31,053 people in shelters, and 11,800 of them are children.

Only a few days away after Eta struck, Hurricane Iota appeared as a catastrophic category 5 hurricane on 16 November, with a similar path to Hurricane Eta. Iota has affected not only many of the communities already impacted by Eta, but many additional ones. .

The Government of Guatemala maintains a state of calamity in Alta Verapaz and other 9 departments of the country. It is estimated that more than half a million children have been affected by Eta and Iota in Guatemala.

The arrival of hurricanes in the midst of the COVID-19 pandemic has increased the vulnerability of this population even more, especially that of children and adolescents.

UNICEF, in collaboration with the government and other partners, continue scaling up efforts in response to the affected communities, distributing hygiene kits for the affected families and carrying out life-saving nutrition interventions.

UNICEF and partners are also providing psychosocial support at shelters and communities affected and supporting child protection authorities’ capacities to prevent violence against children and to detect and attend cases. Of the countries affected by the hurricanes across Central America, more than 175,171 people, including about 67,596 children, were forced into shelters which raises concerns regarding overcrowding and curbing the spread of COVID-19.

Today, Sacsi Chitaña is beginning to dry, but the indelible mark that the water left still perfectly visible. Indeed, it must have been like in the movies. But sadly, reality overcame fiction once again. 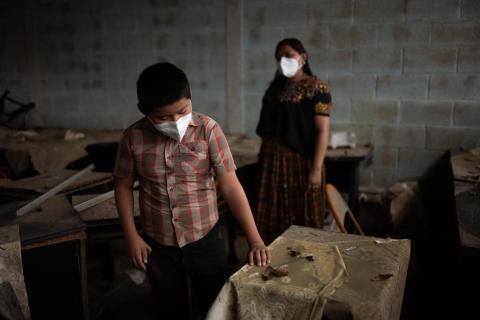 The impact of hurricanes Eta and Iota

“It pains me to see many houses and schools still buried under sand or covered in mud in the communities affected by the hurricanes”, Jean Gough 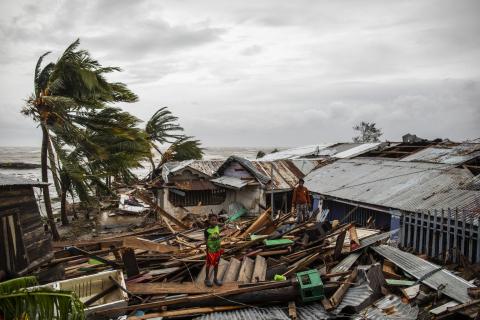 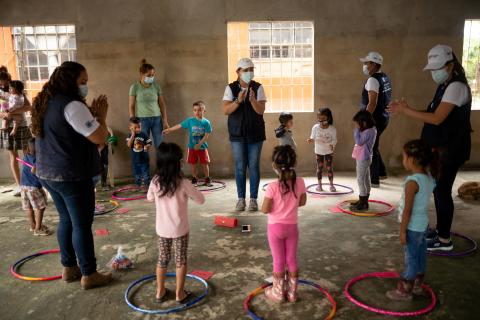 Japan contributes US$2.2 million to UNICEF’s emergency response for hurricane-affected children in Nicaragua, Honduras and Guatemala 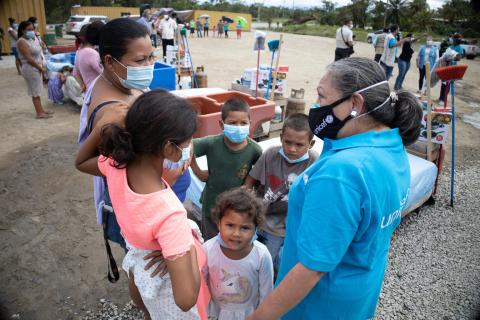 Back-to-back hurricanes in Central America left at least 1.5 million children at risk of severe diseases due to water contamination