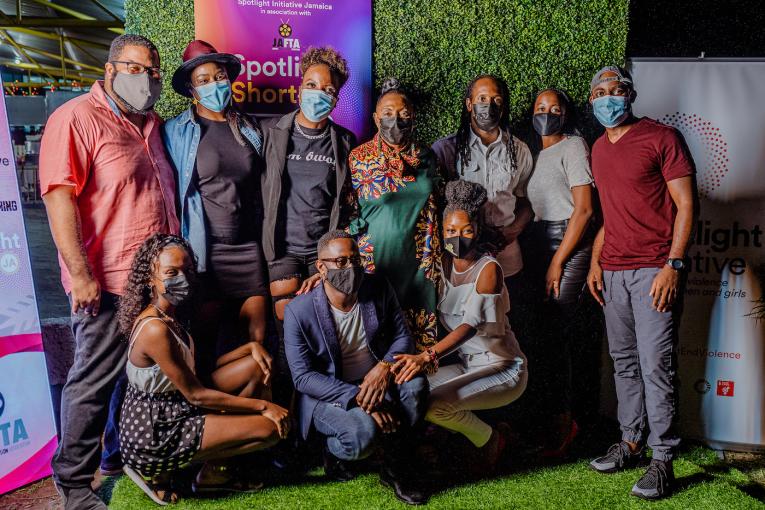 KINGSTON, 8 December, 2021 – Four powerful short films based on real-life experiences of survivors of gender-based violence had their world premiere on Sunday evening at the Palace New Kingston Drive-In and virtually on UNICEF Jamaica and JAFTA social media platforms, during the 16-days of Activism against Gender-based Violence currently taking place worldwide.

Diverse in both styles and subjects, the four docu-dramas are Absolute Power where a woman recounts the harrowing tale and triumph surrounding her relationship with her narcissistic and abusive lover and co-worker. I Was Only Twelve explores the soul-searching confrontation when abuse hits closer to home and a survivor’s sister discovers a letter no one was supposed to find.

Boy, Girl and All the Rest took a close look at an abused non-binary child and their plight for acceptance and redemption; and Kindle: Story of A Woman on Fire followed the events that sparked a woman’s escape after years of enduring domestic violence.

At the premiere, the films were shown along with opening remarks from the European Union and United Nations Spotlight partners and by the Minister of Culture, Gender, Entertainment and Sport, the Honourable Olivia Grange, on their respective efforts to address gender-based violence.

“I continue to implore that we should each play our part in putting the spotlight on gender-based violence.” said Minister Olivia Grange, Minister of Culture, Gender, Entertainment and Sport. “As the Minister with responsibility for both Gender Affairs and Culture, I was heartened at the collaboration between both sectors to tell our stories and at the same time raise awareness on this longstanding issue. We can be proud of the outstanding work of the Jamaican film industry in this effort and encourage members to continue to capture the realities of life in all its forms.”

All Spotlight Shorts JA films had Jamaican above-the-line teams of filmmakers and writers, and a supportive cast and crew. The project teams were Writer/Director Gemmar McFarlane and Producer Julene Kenyon (Absolute Power), Director David Johnson, Producer Ryan Campbell and writer Jhanielle Powell (I Was Only Twelve), Director/Producer Nadean Rawlins and Writer Maylynne Lowe (Boy, Girl and All the Rest) and Producers/Directors Frank O’Neill and Stephanie Lyle with writer Nicanor Gordon (Kindle: Story of A Woman on Fire).

“We are proud of the success of the Spotlight Shorts JA initiative to merge creativity with a cause to help Jamaican filmmakers make visually impactful and meaningful stories,” noted Saeed Thomas, President of JAFTA.

The event closed with panel discussions between the filmmakers and host Dahlia Harris.

The Spotlight Shorts JA initiative’s open call was launched in July 2021. Over 100 potential applicants attended a sensitization session to learn more about the nature of gender-based violence in Jamaica, and the attitudes and behaviours that fuel this type of violence, before submitting treatments for consideration. The four selected projects were each awarded a grant of JMD one million dollars for production.

The teams and the survivors whose stories are being shared were provided with psychosocial support, as part of preparation for film production. Each team was also assigned a mentee – a young person from a vulnerable community who has an interest in filmmaking – to help build skills and share information about the film industry with youth. 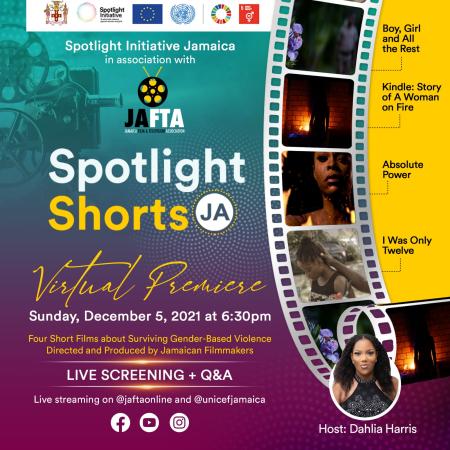 For more information about UNICEF and its work for children in Jamaica, visit www.unicef.org/jamaica. 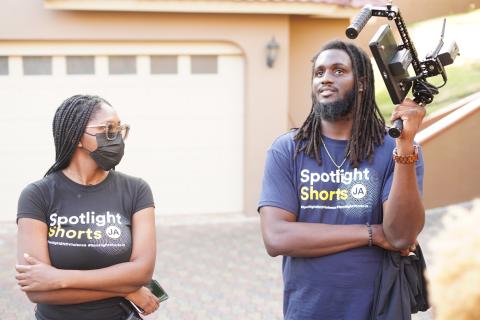 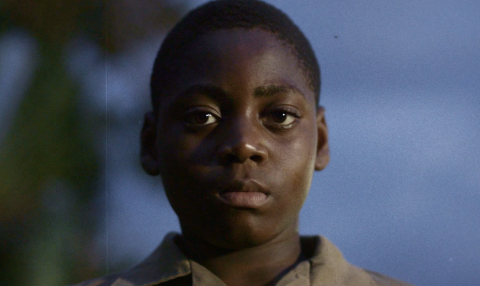 Local filmmakers and survivors of gender-based violence collaborated to share their stories under the Spotlight Initiative. 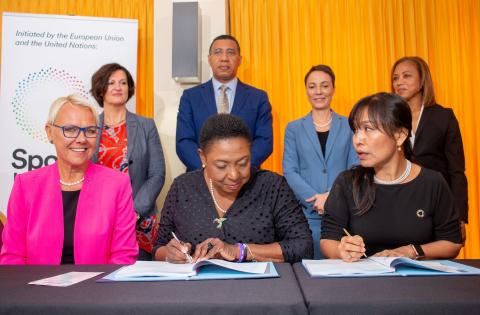 The Spotlight Initiative in Jamaica

The Spotlight Initiative in Jamaica is helping to transform society so that women and girls can live free from family violence. 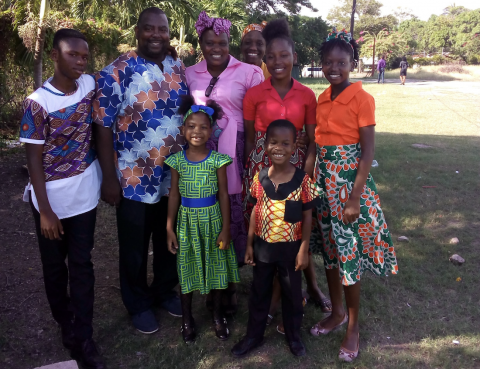 Taught to discipline by beating as a child, Ricardo's view changed the day a younger brother threatened to kill him in revenge.