Breastfeeding is indeed a smart investment not only in the health of children, but also in the wealth of nations

Tehran, 01 August 2017- “Breastfeeding is indeed a smart investment not only in the health of children, but also in the wealth of nations,” said UNICEF Representative in Iran, Dr Will Parks, in his speech in the launch ceremony to start the World Breastfeeding Week organized by Iran’s Ministry of Health and Medical Education at Tehran Medical University on 1st August 2017.

In this event, senior officials from the Ministry of Health and Medical Education, including Deputy Health Minister, Dr Sayyari, his advisor, Dr Kalantari, as well as Director General of the Academy of Medical Sciences and longstanding breastfeeding advocate, Dr Marandi, all spoke about the measures taken so far as and the future perspectives of promoting breastfeeding in the Islamic Republic of Iran.

In his speech, UNICEF Representative Dr Parks highlighted the economic significance of promoting breastfeeding and referred to a forthcoming UNICEF report stating that every US$1 invested in breastfeeding generates an estimated US$35 in economic returns for countries. “The benefits of breastfeeding for children and their mothers have the power to improve a country’s prosperity with lower health care costs and stronger, more able workforces,” added Dr Parks.

UNICEF Representative in Iran talked about a number of potential barriers which could contribute to a mother’s decision for stopping breastfeeding early and said: “Not having breastfeeding-friendly workplaces and employment opportunities is one such barrier.” He then referred to a study on breastfeeding which indicated that interventions such as maternity leave and workplace support had led to a 30 per cent increase in breastfeeding rates.

Dr Parks described lack of support from the community and family members as another barrier in the way of promoting breastfeeding: “Breastfeeding requires encouragement and support from skilled counsellors, family members, health care providers, employers, policymakers and others.” He added: “Studies show that community-based interventions such as group counselling and education can increase timely breastfeeding initiation by 86 per cent.”

Dr Parks expressed UNICEF’s readiness to support the Ministry of Health and Medical Education in building the technical capacity of national experts on promotion of breastfeeding by facilitating exchange of knowledge and expertise between Iran and other countries. 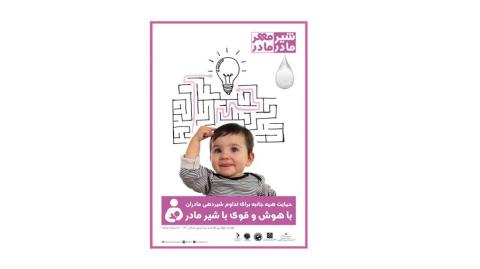 Celebration of the World Breastfeeding Week