Guinea-Bissau was certified as polio-free in 2019, with no recorded cases of polio for more than 20 years (between 1998 and 2021). However, four cases of polio were confirmed in the capital Bissau and Biombo region, in October 2021. In addition, polio cases were reported in neighbouring countries, namely Guinea-Conakry, Senegal and Gambia, in 2019. In response, the Ministry of Public Health, with technical and financial support from UNICEF, WHO and other partners of the Global Polio Eradication Initiative (GPEI), which aims to ensure that no child is ever again paralyzed due to any poliovirus, carried out between 27-30 April 2022, the first round of the integrated Polio, Vitamin A and Mebendazol vaccination campaign in all the regions of the country, under the slogan: "POLIO NEVER AGAIN". The second round is planned for June, 2022.

For the operationalization of this campaign, 677 vaccination teams, like the one led by Tamara Sá, a nurse, in Bubaque, with a total of 3,385 people, went from door to door in all the communities, villages and neighbourhoods, aiming to vaccinate over 340,381 children under five against polio in the first round of this campaign, which also included the administration of Vitamin A and deworming with Mebendazol.

“As a nurse, I had to contribute to prevent the spread of polio, a disease that we haven’t verified in the country for long time”, said Tamara. “Although, the health of our children is everyone’s responsibility, not only mothers, but fathers as well, as a sign of responsible caregiving”, concluded Tamara.

UNICEF Guinea-Bissau/2022/Gama
After being vaccinated against polio, the finger of Sandrinho Jaime Aladge (aged 3) in Bubaque, Bijagós archipelago in Guinea-Bissau is marked with blue ink by Tamara to register his vaccination.

UNICEF Guinea-Bissau/2022/Gama
The house of one household that has been visited by the polio vaccination team.

In the Bijagós archipelago where Tamara works, which is a group of 88 islands and islets (about 20 inhabited), spread across 2,500 square kilometres of the Atlantic off the coast of Guinea-Bissau, including Bubaque, 26 vaccination teams, walked long distances to make sure that all children were vaccinated. Despite having a relatively small population, the Bijagós archipelago requires significant logistics arrangement for such a campaign, not only for travel within islands, but also, between islands, due to lack of transport (boats, cars, motorcycles). Moreover, the Bijagós islands are known for the frequent movement of people within islands and to the capital, Bissau. Nonetheless, the identification of the targeted households was well done by the Community Health Workers (CHWs). To address the continuous movement of people, the health teams on the different islands kept in frequent contact, informing each other of the absence of children. There are reports of committed vaccination teams that travelled by boat for hours to vaccinate a single child in a remote island, or teams that travelled with very low fuel in the boat, risking their lives to make sure every child would be vaccinated.

Due to ongoing cashew harvest season in Guinea-Bissau, there are situations when the vaccination teams find challenges to reach some children because they are taken to the cashew nut fields by their parents. But this does not prevent them from being champions for the well-being of Guinea-Bissau children, looking for children in the hardest to reach areas and contacting the parents and caregivers by mobile phone, referring them to the closest vaccination sites.

On a sunny Saturday, Tamara and her vaccination team were administrating the polio vaccines in Bubaque when they received the information that Auzenda Cardoso was working in her cashew nut field, carrying Sandrinho Jaime Aladge (aged 3) with her. After talking to her neighbour, they were able to reach out to her through mobile phone and refer her to the closest vaccination site set up at the regional health directorate for these specific situations.

Auzenda Cardoso and her husband, Jaime Aladge, have three cashew nut fields in Bubaque, in which they work. Thanks to the revenues from the sales, they are able to buy basic staple foods, such as rice, pay for their children’s education, buy medicines and clothes. Nevertheless, as soon as she learned that the vaccination team would be able to vaccinate her child against polio, she immediately stopped her work to quickly walk about 5 Kms with her child on her back, doing all she could to ensure that her little boy would be protected against polio and other preventable diseases.

Harvesting cashew is the foremost economic activity among Bissau-Guinean households. The cashew production in Guinea-Bissau is manually carried out, and the effort to increase productivity only occurs by expanding the agricultural land area used to grow cashews. A limited amount of the harvested cashew is processed, mostly for domestic consumption: the cashew apple is turned into wine and the cashew nut is roasted and de-shelled. Yet the vast majority of cashew production is geared to the export of raw cashew kernel.

The cashew campaign is central to Guinea-Bissau’s economy because it is the main source of income for Guinea-Bissau’s farmers and it also provides an immense contribution to the country’s Gross Domestic Product (GDP). Data from the African Cashew Alliance indicate Guinea-Bissau as the second largest producer of the contingent, after Ivory Coast, contributing about 8% of the nuts produced in the world.

“Our children’s health is the most important thing in the world”, said Auzenda. “That is why I ran to reach the vaccination site that has been gently indicated by the vaccinators, they are a blessing”, she concluded.

In support to this campaign, UNICEF has assisted Guinea-Bissau in the following areas:

- Purchase of 907,500 doses of the polio vaccines as well as ensuring the necessary cold chain through the purchase of 5 refrigerators for vaccine storage to address existing shortages in the regions;

- Supported the distribution of vaccines and campaign materials/equipment to the regions, as well as funds for logistics teams, bottle monitors and social mobilisation;

- Community mobilization in collaboration with religious and traditional leaders, youth, women's associations, students, teachers, parents and caregivers, media and numerous local influencers, promoting their active engagement in the conduct of the polio campaign.

The Polio campaign in Guinea Bissau is expected to put an end to the resurgence of polio cases. It is being supported by the Global Polio Eradication Initiative which is a public-private partnership led by national governments with six core partners - the World Health Organization (WHO), Rotary International, the US Centers for Disease Control and Prevention (CDC), the United Nations Children’s Fund (UNICEF), the Bill & Melinda Gates Foundation and Gavi, the Vaccine Alliance. Its goal is to eradicate polio worldwide. 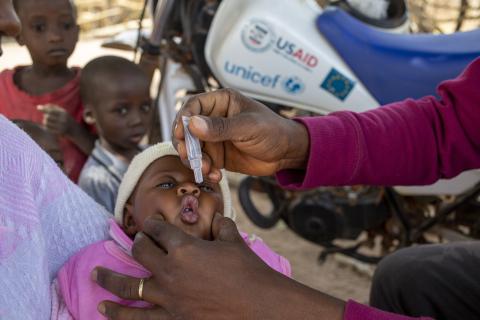 Polio vaccination campaign to be held door-to-door in Guinea-Bissau between 27-30 April, following resurgence of at least four confirmed cases in the country, interrupting its certification as polio-free between 1998 and 2019

Cash transfer programme to reach 1, 587 vulnerable households across the country 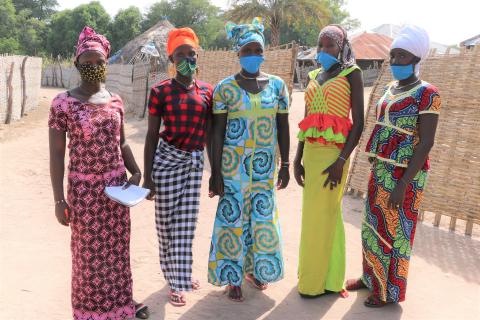 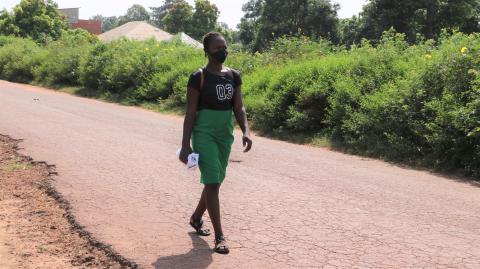 Aissato Baldé is using her communication skills to pass on COVID-19 preventive measures and engage with her community in Tassilima.