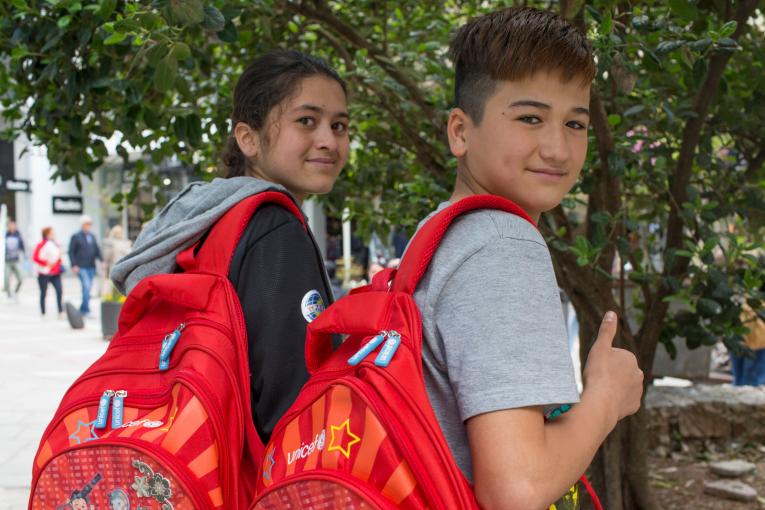 UNICEF/UN075727/Jacome
On 12 April, (left-right) Narguez and Hadi, who are both 11 and from Afghanistan, head home after school at an education centre run by the national NGO Apostoli, in Epirus Region.

ATHENS, 11 September 2017 – On this the first day of the new school year, Greek schools are welcoming in more refugee and migrant children who have been stranded in Greece since April last year.

Major efforts by the Greek Ministry of Education, Research and Religious Affairs supported by UNICEF to get as many children as possible into school are seen as a crucial step to integrate refugee and migrant children into Greek society and to turn the fundamental right of education into a reality for each and every child in the country.

“Without education, a generation of children in Greece will be lost, without necessary skills to contribute to their countries and economies and at greater risk of exclusion. Getting children, whose lives have been on hold, back into school, will help them communicate and socialise with Greek children and help them rebuild their futures,” says Laurent Chapuis, the country coordinator for UNICEF’s Refugee and Migrant Response in Greece. “It is not only crucial for the mental health and psychosocial wellbeing of refugee and migrant children, it will reactivate their development and bring back a sense of stability in their unsettled lives.”

“We applaud the generous plan and tireless efforts made by the Greek government to welcome refugee and migrant children in school,” says Sofia Tzitzikou, the president of Hellenic National committee for UNICEF. The Ministry of Education is committed to opening the doors of its public schools to as many refugee and migrant children as possible, by establishing reception classes for children residing in temporary sites as well as those living in urban accommodation.

“The inclusion of refugee and migrant children in Greek schools has only positive aspects as Greek children – not only will they learn in a multicultural peaceful and caring environment, all these children will also be fully vaccinated before they enrol in school just in the same way as Greek children,” says Tzitzikou. “The Ministry of Education and the Ministry of Health are working closely together to guarantee mandatory vaccination and preventative heath examinations will take place before the start of reception classes. Once enrolled, refugee and migrant children will be given intensive Greek language support to accelerate their language acquisition.”

Although getting their children a good education was a key reason for many leaving their countries in the first place, there have been major hurdles in school enrolment of the stranded children. Some children have missed up to two and a half years of schooling during their journeys and to date less than a third of the 12,000 children of school age have had access to formal education. Language barriers and capacity within the system, stress and trauma leading to poor concentration and high drop-out rates, and resistance to learning Greek as many hope to continue their journey to other parts of Europe, were among the reasons that have kept children out of school.

With the support of the European Union and German government, UNICEF contributes to government efforts to enrol children through communication, sensitization and interpretation, teacher training, homework support, early childhood education and non-formal education for children out of school or who are still on the move to relocate to other countries. To date, UNICEF’s non-formal education programme has benefited around 5,000 children with an aim to prepare for formal school.

In addition to the positive long-term impact of social cohesion, integrating refugee and migrant children in the Greek education system will also benefit Greek children and host communities throughout the country in very tangible ways. For example, almost 700 new teachers will be recruited for reception classes.

“Only once the school year is underway, will we know exactly how many children will be in learning but what we do know is no child should be left without education. Educating children will benefit not only those children once excluded but all of Greek society today and tomorrow, said Sofia Tzitzikou.”

UNICEF continues to call on governments to adopt its six-point agenda for action to protect migrant and refugee children and ensure their wellbeing:
1. Protect child refugees and migrants, particularly unaccompanied children, from exploitation and violence;
2. End the detention of children seeking refugee status or migrating, by introducing a range of practical alternatives;
3. Keep families together as the best way to protect children and give children legal status;
4. Keep all refugee and migrant children learning and give them access to health and other quality services;
5. Press for action on the underlying causes of large scale movements of refugees and migrants;
6. Promote measures to combat xenophobia, discrimination and marginalization in countries of transit and destination.

FACTS:
Refugee and migrant children in formal education in Greece (as of June 2017)
- 12,000 school-age children overall (6-17 years old)
- Approximately 3,500 children aged 6-17 were in formal education in 2016-2017 school year (29% of 12,000 total)
- Refugee and migrant children have missed on average 2.5 years of schooling due to conflict, violence and displacement.
- Access to schools is particularly limited for children over 15 years old as the Ministry of Education’s current refugee education programme only targets children up to that age.

Unaccompanied and Separated Children (UASC) in shelters (based on assessment by Office of the Deputy Ombudsman for Children’s Rights, UNICEF and the Network for Children on the Move, May 2017):
- 1,180 children assessed in 54 shelters across Greece
- 44% of UASC accommodated in such shelters attended school/formal education and 56% were out of school. Enrolment differs depending on age and nationalities. 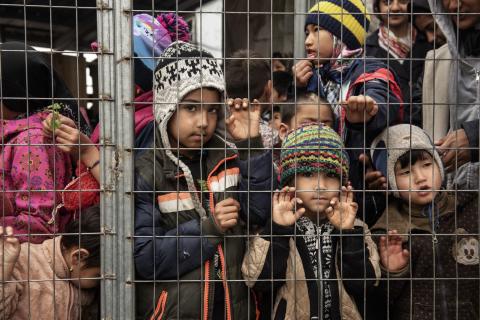 Read how UNICEF are supporting child refugees and migrants who have arrived in Europe. 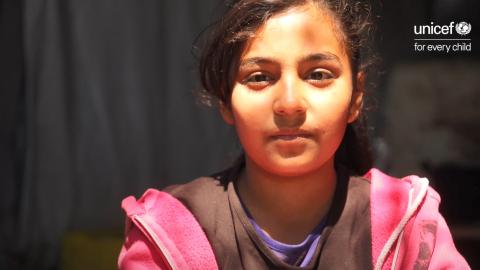 Armita, 10 years old, loves going to school against all odds

Armita, 10 years old, loves going to school against all odds 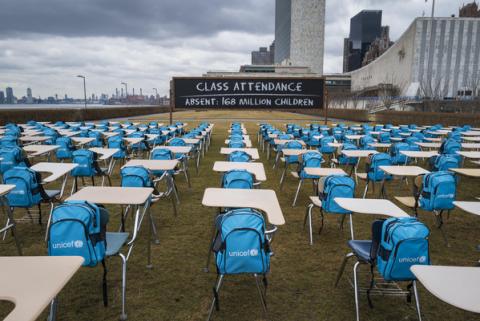 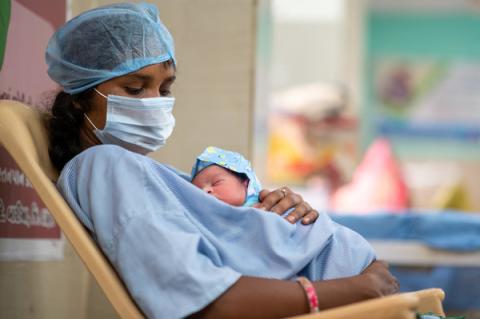