The race to return Ghana to its polio-free status

Going the distance to leave no child behind

5 SEPTEMBER 2019 - After a decade of being polio-free, Ghanaians awoke to learn that a public health emergency had been declared because, a two-year old child from Chereponi in the North-East region had been confirmed with polio, which had paralyzed her in both limbs.  A routine disease surveillance a month earlier, had found the polio virus in a drain in Tamale, the capital of the Northern region.

Almost immediately, the Ministry of Health, Ghana Health Service, WHO, UNICEF Center for Disease Control and Prevention, other partners and volunteers launched an immunization campaign to prevent the virus from spreading further. Two million children from birth to five years of age in five regions were targeted to receive the polio vaccine. Starting in the Northern region, the campaign was extended to the Greater Accra region where the virus was later detected.

Long distances within the Northern region coupled with poor road networks, and the regions tendency to flooding during the rainy season made reaching children in parts of the Northern region a challenge, but it was critical during this campaign to get vaccines to all the districts targeted for the campaign.

UNICEF Health Specialist, Priscilla Wobil crossed a river via canoe, waded through swamp, and walked barefooted for four kilometers to reach Kocha, a community described as hard-to reach, where volunteers were immunizing children.

In the Northern region of Ghana, there are many such communities which are difficult to access, but UNICEF and partners were keen to reach all children in the affected communities to support the campaign that would stop the disease from spreading.

Whilst Priscilla was working in the rural communities, UNICEF was also supporting the campaign in Agbogbloshie, a slum in Accra where the virus had also been discovered. UNICEF joined volunteers and vaccinators to monitor the campaign, ensuring that all children aged five years and below were immunized.

After one hour of walking, the team arrive in Kocha and are received by the chief, Ngbama Bagurba, who supported the campaign. The chief spearheaded the deployment of volunteers and ensured that all households complied with the vaccinators.

Volunteers in Kocha walked long distances to cover every household. The community is close to the Togo border on the East and the volunteers reached all children within that space.

In the town of Kocha, four-month-old twins Nyoju (left) and twin sister Nyopu were also immunized in the Kocha community. Their little middle fingers duly marked to show that they are protected from the polio virus.

UNICEF Health Specialist  Dr. Peter Baffoe said: “We set ourselves the target to reach two million children to protect them from polio, in the areas where they were most at risk, three rounds of polio was given, all in the bid to ensure that Ghana returns to its polio free status” The target set were exceeded, and for that, I am very happy." 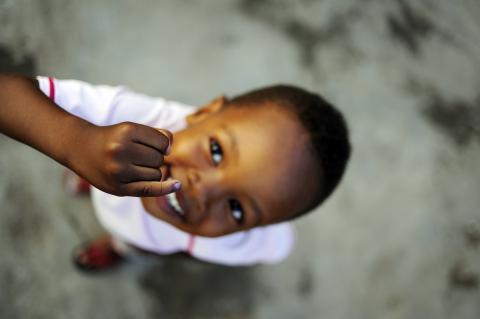 Champions of the #ENDPolio Campaign 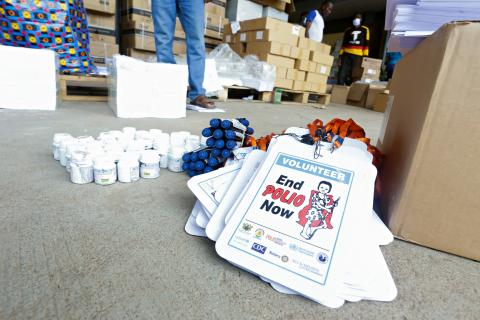 Fighting polio in the COVID-19 context

Reaching every child with life-saving vaccines to #ENDPolio 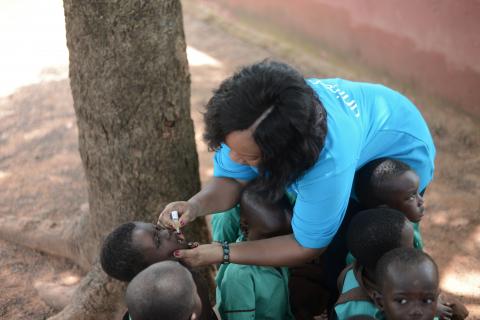 #ENDPolio: Leave No Child Behind