Woinshet Fanta lives in a cramped single room with her four children in the shadow of Addis Ababa’s old train station. She used to sell potatoes and sliced chips throughout her neighbourhood and on a good day might earn up to 100 birr (US$3), half of which she would put away for the monthly rent. Like everyone in this district of the Ethiopian capital, hers was a hardscrabble life, made even harder since her husband died 12 years ago leaving her as the family’s sole breadwinner.

In the past two months, however, the family has been tipped to the brink of destitution. In order to reduce the spread of COVID-19, infection control measures have been instituted which include ordering all petty traders like Woinshet to stop selling their goods from door-to-door, as she has always done, and stay home as much as possible. Now she sells potatoes from outside her front door, which means her income has collapsed to as little as 30 birr (US$0.91) a day. Last month she had to beg her landlord to forgo rent.

The impact of the loss of income on Ethiopian families is grave and particularly so for children. The number of meals is reduced, ‘luxuries’ like protein-based foods are taken out, basics are foregone, assets like the television are sold off and even shelter for families is threatened as they cannot afford rentals. They have no money to meet their basic health care needs.

Worse still, Woinshet and many households like hers have no safety net to fall back on. She is not part of any social protection scheme and has no community health insurance. For now, she is relying on support from neighbours to get by.

But the sting brought about by COVID-19 will not only be felt by those who work in Ethiopia’s large informal sector. The UN, as per an unpublished April 2020 assessment, estimates that between 1.6 million to 4 million jobs will be lost in Ethiopia as a result of COVID-19. As the average family size is five people, up to 20 million people could be affected.

The silver lining for the poor lies in Ethiopia’s safety net programme, the second largest in sub-saharan Africa. The rural safety net, known as the Productive Safety Net Programme (PSNP), reaches 8 million chronically food-insecure Ethiopians in normal times, although the number has doubled in times of crisis such as drought.[1] The urban equivalent, which was launched in 2016, today covers some 604,000 beneficiaries across 11 cities including Addis Ababa. Within three years, the community-based health insurance scheme has rapidly expanded to cover 20 million poor people, an impressive pace by any country measure.

According to a UNICEF assessment of the socio-economic impact of COVID-19 on Ethiopia, the pandemic and associated containment measures such as social distancing will lead to an increase of between 400,000 and 1.2 million poor people, almost half of whom are children. A 2019 estimate of multidimensional poverty in Ethiopia found that 88 per cent of children are already deprived of at least three basic services. This proportion is expected to rise, too, as families struggle to feed, provide and meet the daily needs of their children. This is happening in a context of rising prices of food and other basic goods, a struggling health care system, and exorbitant costs of basic yet essential medicines.

There is already evidence that the COVID-19 pandemic is having damaging side-effects. Measles and polio vaccination campaigns planned for March and April 2020 had to be postponed, increasing risks to children’s health. Even before COVID-19, Ethiopia had 1.2 million unimmunized children, one of the largest cohorts of non-immunised children in the world. Vaccination is estimated to prevent around 63,000  child deaths per year. By the third week of April, 10 of the country’s 11 regions and city administrations had reported measles outbreaks. Unless routine health services are made to function seamlessly, the outlook is not good.

Child malnutrition is also showing signs of increase. Admissions of children with severe acute malnutrition in the six desert-locust-affected regions of Tigray, Afar, Amhara, Oromia, SNNPR and Somali rose by an average of 20 percent between January and February this year compared to the same period last year. Due to the combined effects of desert locusts, climate change, and the secondary impacts of COVID-19, the humanitarian community anticipates that the number of children to be treated for severe acute malnutrition will rise from the 460,000 estimated in January 2020, which includes 16,000 refugee children, to 550,000 by December (of which 18,400 are refugee children). UNICEF aims to treat these children with Ready-to-Use Therapeutic Food at a cost of US$ 38 million, albeit there is current funding gap of US$4.3 million.

At the end of 2019, about one million children benefited from school feeding programmes across the seven regions that were targeted for humanitarian action; school closures have led to a decline in food intake and nutrition, as well as a possible increase in school dropouts. In Addis Ababa, for instance, there are more than half a million children that were receiving school meals who are no longer receiving this support.

To tackle the multi-dimensional impacts of COVID-19, we all need to move with agility in rolling out social protection measures to safeguard the most vulnerable, especially families and children. We at UNICEF propose that Ethiopia scales up its safety nets with top-ups for existing beneficiaries (vertical expansion) and even expands caseload (horizontal expansion) to deal with the immediate and mid-term impacts of the pandemic. Expansion should aim to reach all children and pregnant and breastfeeding women and put particular emphasis on food-insecure households with children under age two, so as to safeguard their nutrition status.

Since the existing urban safety net targets only the poorest of the poor, additional support with cash top-ups is needed for pregnant and breastfeeding women as well those who cannot work such as the elderly, the disabled, and single mothers with very young children. In this light, UNICEF, the World Bank, and other development partners are working with the government to expand the current safety net to cover an additional half a million people. With financial support from the Swedish government, we intend to provide top-ups to all families permanently on the urban PSNP programme in the 11 cities covered by the programme in July. And with the World Food Programme, we will support top-ups to pregnant and breastfeeding women starting in Addis Ababa.

Encouragingly, government authorities have begun making important tweaks to the urban safety net in response to the crisis. Public work requirements, for instance, have been waived for three months (and maybe for longer, if needed). Advance payments have been made to all beneficiaries, to cover April to June 2020, and they have also been permitted to retrieve up to half their obligatory savings in the scheme. All will see an increase in benefit levels starting from July, and with UNICEF’s support, all have received soap and hygiene messages.

Whilst families and children in Ethiopia face one of the most serious threats to their health and well-being in decades, the current crisis presents opportunities to strengthen and expand the existing social protection system in order to boost resilience against future shocks. For instance, the expansion of the safety nets to new beneficiaries can also help in the development of a registry which will facilitate e-payments for beneficiaries at a larger scale. Another idea is to build on the expansion of the community-based health insurance to introduce fee waivers for families on the PSNP. Finally, a key area will be ensuring that families receive larger cash and food transfers to enable them to meet their nutrition needs, while providing more households with cash rather than food as it tends to have a greater multiplier effect on the local economy.

In the end, expanding and allocating resources to social protection is a net gain for the country since it will protect millions of people from slipping deeper into poverty. There must however be a strengthening of public funding, ensuring that in the medium to long term, it leads to social protection systems that are prepared to absorb any future shocks such as COVID-19 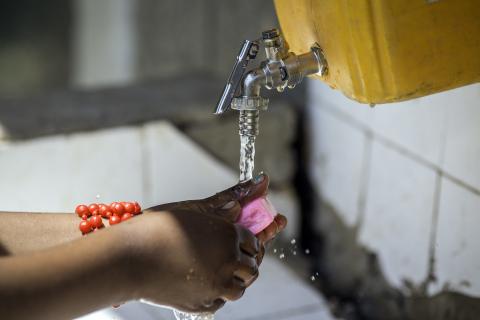 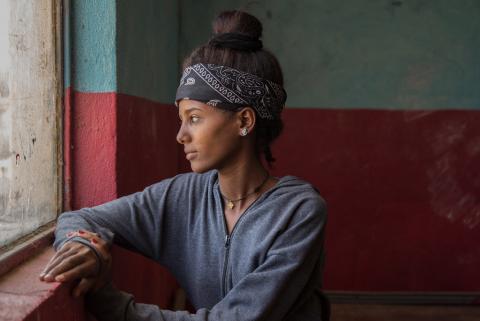 with Covid-19 vaccination in IDP Camps

We are teaching communities how to keep their distance, but we cannot keep our distance from our communities