UNICEF supporting the return to normality after devastating crises

The Caribbean is highly prone to natural disasters. Meteorologists predict that hurricanes, such as Irma and Maria that left a path of devastation across the eastern Caribbean in September 2017, will become the ‘new normal’.

When hurricanes, natural disasters and emergencies strike, life is turned upside down. There is an extensive disruption of essential services such as electricity and water supplies. In some of the eastern Caribbean countries and territories struck by the Category 5 hurricanes (Anguilla, Barbuda, British Virgin Islands, Dominica, and Turks and Caicos Islands) up to 95 percent of the infrastructure suffered damage. The entire population of Barbuda was evacuated to the sister island of Antigua. Many schools were damaged and left students with nowhere to go.  Some 39,000 children were affected in total.

Beyond immediate humanitarian concerns, longer-term issues such as how to cope with a traumatised population, especially children, come to the fore. The availability of psychosocial support, where people are able to work through their experiences is vital. There may also be other social issues that arise, such as children who have too much time on their hands getting into trouble because they are either not in school or the school timetable is shortened.  Children who are forced to leave their homes and/or move to shelters are also at heightened risk of abuse and exploitation. The impact on younger members of our communities is significant.

Another critical area has been the implementation of Return to Happiness programmes, where children are given the space to explore any trauma they have experienced through the use of play, poetry, drama, songs and other creative activities. As of July 2018, some 17,000 children had benefitted and 1,500 facilitators have been trained.

You’re trying to help the child return to a sense of normality and to experience hope for the future rather than fear, saying: “Even though you’ve been through a traumatic event, it will get better.” 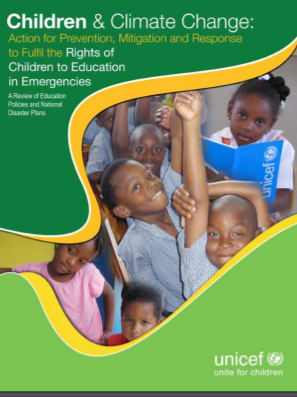 Children and Climate Change
Education in emergencies
Get the document