Still living in shadow of storm

ANTIGUA- 6 February 2020- On school days Khadalia and her 10-year-old brother, Kedar — who attends the same school — must wake up very early, as their commute involves two buses with a transfer in between. Their mother, Gloria, has eight children in all, ranging in age from seven to 27; five of the children are under 8. Each of Gloria’s other school-age children attends a different school from the others. In September 2017, during Hurricane Irma, the family was evacuated from Barbuda to Antigua after their house suffered Level 4 damage – defined as a structure with at least 50 per cent of walls severely damaged, in addition to roofing and rafters, so that rebuilding may be less expensive than repairing. More specifically, the foundation and a small section of flooring are all that remains of the family’s home. A friend took Gloria and her children in for the first night in Antigua. Through another friend they were able to locate an apartment to rent. They have moved three more times since, staying for a time in a hotel which served as a temporary shelter for Barbudans displaced by the hurricane. The shelter closed in April of 2019, leaving Gloria with no choice but to rent a house for EC$1,400 (the equivalent of US$522). She lives from paycheck to paycheck, financially strained. When the family lived in Barbuda, they only had to pay for electricity. Gloria says that she and the children would move back to Barbuda if only they had a house to return to. An estimated 40 families are living in tents on the island – but even if they were so inclined, this is not an option for the family, as Kedar suffers from asthma.

As reported in a UNICEF Climate Child Alert published in December 2019, the Caribbean is one of the regions in the world most vulnerable to natural hazards, including hurricanes – which are increasing in intensity because of climate warming. The 28 Small Island Developing States (SIDS) in the Caribbean are home to 43 million people, including 12.6 million children under the age of 18. These children and their families are among the most vulnerable in the world to being forcibly displaced by weather-related disasters, including drought, storms and flooding – events which are increasing in intensity because of climate change and a warming planet. Much of the region’s vulnerability to extreme weather events like hurricanes comes from its geography and its makeup of SIDS and island territories. The relatively small territorial size of the Caribbean SIDS means that the entire area and population of a given island could be impacted by a large hurricane. People living in low-elevation coastal zones are at also at extreme risk from storm surges and rising sea levels more generally.

The Caribbean has been particularly hard-hit by devastating hurricanes since 2014, with the 2017 Atlantic hurricane season standing out as historic both in terms of storm strength and damage. The season had 10 hurricanes, six of which developed into Category 3 storms or higher. According to the U.S. Fourth National Climate Assessment, in 2017, “Antigua and Barbuda, Cuba, Dominica, Saint Kitts and Nevis, Anguilla, British and U.S. Virgin Islands, Guadeloupe, Puerto Rico, Saint Maarten, and Turks and Caicos were all affected by Saffir–Simpson Category 4 and 5 hurricanes (winds of 130 mph or higher).” The Caribbean SIDS typically have dependent and undiversified economies that are heavily reliant on tourism. As a result, many SIDS lack the economic and institutional resources needed for both disaster preparedness and response. A significant proportion of families in the region also suffer from economic marginalization and do not have the means to ‘hurricane-proof’ their homes or invest in other preparedness and resiliency measures. The end result is that in some instances, when Category 4 or 5 hurricane makes landfall on an economically vulnerable island, many families will be unprepared and the Government will not have the capacity to respond to help them. According to IOM reporting on the effects of Hurricane Irma in 2017, “In the case of Antigua and Barbuda and (the British Virgin Islands), damages and losses amount(ed) to $155 million and $2.6 billion respectively. With maximum sustained windspeeds of 185 mph, Hurricane Irma was at the time the strongest hurricane on record in the Atlantic, affecting more than 15 countries and territories. More than 1.7 million people were displaced in the Caribbean including in Cuba, the Dominican Republic, Haiti and Antigua and Barbuda.

As reported in a UNICEF Climate Child Alert published in December 2019, the Caribbean is one of the regions in the world most vulnerable to natural hazards, including hurricanes – which are increasing in intensity because of climate warming.

Preparing for the Hurricane Season

“It’s going to be different this time.” 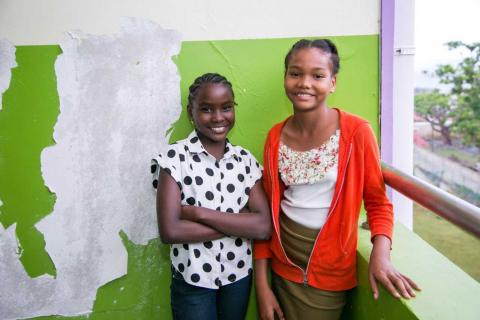 Classes in full swing for first time since Hurricane Maria

Back to school after hurricane damage 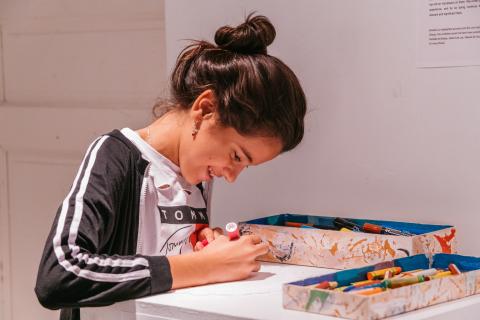 Art therapy being used as a tool to help migrant children

Freudelys, 12, is a Venezuelan who has been in Trinidad for a few months