Svay Rieng province leads Cambodia in sanitation for all

In January, Svay Rieng became the first Cambodian province to eradicate open defecation, thanks to a huge effort from national level down to individual communes

Yin Sophal’s wooden home sits at the edge of her village in Svay Rieng, surrounded by parched fields dotted with palm trees. As she sits and talks, small children chase each other around her yard, laughing. Five of these are her grandchildren, who she is raising while their parents work in distant provinces, but the others are neighbours drawn to her warmth. It’s a similar scene to when she was a young mother and it was her own children playing, but with at least one major difference. She now has a latrine in her yard, granted privacy by bamboo and tarpaulin.

“It made me very happy when we built it last year,” Ms Sophal says. "Before, we had to go to the toilet either in the fields at a neighbour's, but that’s far away. The children would be scared to go out at night so I had to take them. Now things are much easier." Sophal has also installed handwashing. "One of my grandchildren is disabled and has poor health, so handwashing is especially important for her.

Sophal’s home improvements are part of Svay Rieng’s all-out effort to improve sanitation for its entire population, in collaboration with the Ministry for Rural Development (MRD), UNICEF, NGOs and with funding from the UK Government’s Foreign, Commonwealth & Development Offices. In late 2018, the MRD and UNICEF agreed that Svay Rieng should be supported to be the first Cambodian province to become officially Open Defecation Free (ODF). This would be achieved through a huge effort in every district, commune and village in Svay Rieng, using an approach that combined community engagement, awareness-raising, encouragement, and financial support to help the poorest families build latrines. On 30th October 2021, Svay Rieng achieved its ambition, with the last few homes finally having access to basic sanitation, as verified nationally in January 2022.

“We’re very proud,” says H.E. Toch Polyva, Svay Rieng’s Deputy Provincial Governor, and chair of the Provincial Working Group of Rural Water Supply, Sanitation and Hygiene which led this success story. "Svay Rieng has historically been a poor province. Some time ago, less than 10% of homes had latrines. But tackling sanitation and ending open defecation can tackle poverty too. It improves people’s health which reduces health expenses. It also means they don’t have to miss work when sick, and that means they contribute more economically and contribute to the Royal Government of Cambodia’s national goal of ending poverty.”

H.E. Polyva led the Province's work towards ODF status but says it was a true team effort. “It couldn’t have happened without the Royal Government and all the development partners and NGOs," he says, before stressing that the most important work was at the local level. "The village chiefs and the sanitation focal points were absolutely critical to this achievement. I don't even call them sanitation focal points, I call them sanitation heroes."

Hul Sodany of Traos Commune is one of those sanitation heroes. She describes the challenges her community faced in ensuring every household had a latrine. "We have a lot of migrant workers who are difficult to contact and, of course, COVID was a challenge. Many people lost their jobs. I worked closely with the province and district to support those households, and also with local NGOs. There was one household that was extremely poor, it was difficult for them to pay for improvements. They contributed a little, which is important, but I worked with local businesses to raise more. I showed pictures of how difficult their home situation was, and people gave. It was a great local achievement to bring sanitation to this family."

Village chiefs like Tep Yut also played critical roles in mobilising local resources and keeping efforts on track. "It required a lot of encouragement and a lot of follow up. Challenges weren’t always about poverty. Sometimes families would buy the equipment but not build the actual toilets. Sometimes I contributed some materials or helped organise people to help with building, whatever it took."

Mr. Yut’s dedication was deep as he had already witnessed the benefits of better sanitation.

“I’ve been here my whole life. Long ago, there were no toilets here, everyone just went into the jungle to do their business. But UNICEF started helping us with sanitation, and I have seen how it has improved life. The environment looks cleaner and when you walk around you don’t smell bad things. It’s good for health, good for hygiene, good for kids and good for visitors!”

Mr. Yut lives in Romeas Haek, which was the final district in Svay Rieng to cross the ODF finishing line. Prum Sarin is the district’s Deputy Governor and says planning and collaboration were the key to success. "You need to have clear priorities," he explains, "and also the right mechanisms for setting those priorities, like working groups. Data is also important, you need to know where the households without latrines are, and why. Only then you can make a plan, set deadlines and start working together to solve the problem." Mr. Sarin is proud his district achieved ODF status ahead of schedule, despite the challenges of COVID. In fact, he thinks COVID may have helped, by raising awareness of the importance of handwashing.

Sam Nito, director of Svay Rieng’s Provincial Department of Rural Development, agrees. “At first we thought the pandemic might disrupt our progress, but then we realised we could use it as an opportunity. COVID provided a chance to change people’s minds and raise awareness, because families really understood the importance of sanitation and hygiene. We believe this awareness will be sustained even after COVID is over.”

Mr Nito is passionate about what has been achieved. "I'm proud that Svay Rieng has reached this point. Our country's difficult history, the civil war and poverty that followed, left a legacy of bad sanitation, which led to poor health and even greater poverty. But we've turned that around. This will improve the economic health of families and communities, and that will feed into the Royal Government's larger strategy of ending poverty, and that feeds into the United Nations' Sustainable Development Goals. Every person in every village in Svay Rieng should feel proud.”

It’s certainly made a big difference to Meang Sopheap and her young son, who had no sanitation at all a year ago. “I used to be afraid when I went out into the fields at night to go to the toilet, in case there was a stranger or I got bitten by a snake,” Ms. Sopheap says. More important still is the improvement to her family's hygiene. “Before we built the toilet and had water on hand, we didn’t wash our hands in the home. Now we are much better at looking after ourselves, which makes me happy.” 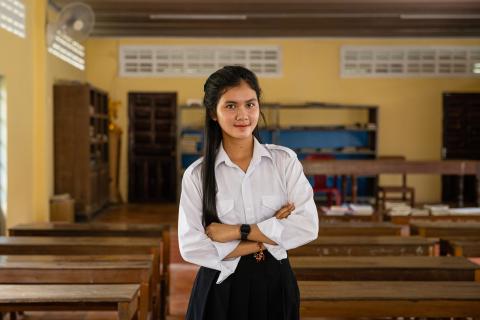 Treating menstruation as what it is - normal 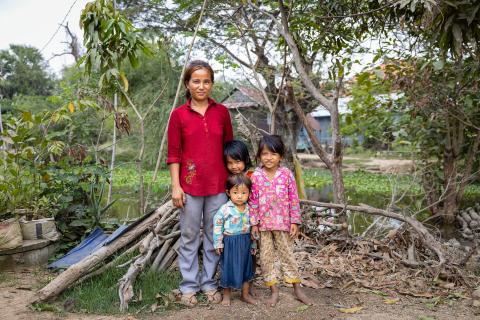